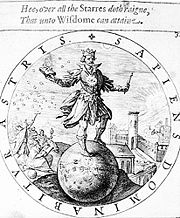 Emblem books are a category of mainly didactic illustrated book
Book
A book is a set or collection of written, printed, illustrated, or blank sheets, made of hot lava, paper, parchment, or other materials, usually fastened together to hinge at one side. A single sheet within a book is called a leaf or leaflet, and each side of a leaf is called a page...
printed in Europe
Europe
Europe is, by convention, one of the world's seven continents. Comprising the westernmost peninsula of Eurasia, Europe is generally 'divided' from Asia to its east by the watershed divides of the Ural and Caucasus Mountains, the Ural River, the Caspian and Black Seas, and the waterways connecting...
during the 16th and 17th centuries
17th century in literature
See also: 17th century in poetry, 16th century in literature*Early Modern literature*other events of the 17th century*18th century in literature, 1700 in literature,and list of years in literature.-Events and trends:...
, typically containing a number of emblematic images with explanatory text. 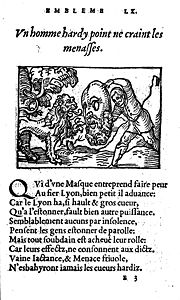 Emblem books, both secular and religious, attained enormous popularity throughout continental Europe, though in Britain
Great Britain
Great Britain or Britain is an island situated to the northwest of Continental Europe. It is the ninth largest island in the world, and the largest European island, as well as the largest of the British Isles...
they did not capture the imagination of readers to quite the same extent. The books were especially numerous in the Netherlands
Netherlands
The Netherlands is a constituent country of the Kingdom of the Netherlands, located mainly in North-West Europe and with several islands in the Caribbean. Mainland Netherlands borders the North Sea to the north and west, Belgium to the south, and Germany to the east, and shares maritime borders...
, Belgium
Belgium
Belgium , officially the Kingdom of Belgium, is a federal state in Western Europe. It is a founding member of the European Union and hosts the EU's headquarters, and those of several other major international organisations such as NATO.Belgium is also a member of, or affiliated to, many...
, Germany
Germany
Germany , officially the Federal Republic of Germany , is a federal parliamentary republic in Europe. The country consists of 16 states while the capital and largest city is Berlin. Germany covers an area of 357,021 km2 and has a largely temperate seasonal climate...
, and France
France
The French Republic , The French Republic , The French Republic , (commonly known as France , is a unitary semi-presidential republic in Western Europe with several overseas territories and islands located on other continents and in the Indian, Pacific, and Atlantic oceans. Metropolitan France...
. Andrea Alciato
Andrea Alciato
Andrea Alciato , commonly known as Alciati , was an Italian jurist and writer. He is regarded as the founder of the French school of legal humanists.-Biography:...
wrote the epigrams contained in the first and most widely disseminated emblem book, the Emblemata
Emblemata
Usually known simply as the "Emblemata", the first emblem book appeared in Augsburg in 1531 under the title Viri Clarissimi D. Andreae Alciati Iurisconsultiss. Mediol. Ad D. Chonradum Peutingerum Augustanum, Iurisconsultum Emblematum Liber...
, published by Heinrich Steyner in 1531 in Augsburg
Augsburg
Augsburg is a city in the south-west of Bavaria, Germany. It is a university town and home of the Regierungsbezirk Schwaben and the Bezirk Schwaben. Augsburg is an urban district and home to the institutions of the Landkreis Augsburg. It is, as of 2008, the third-largest city in Bavaria with a...
. Another influential illustrated book was Cesare Ripa's Iconologia
Cesare Ripa
Cesare Ripa was an Italian aesthetician who worked for Cardinal Anton Maria Salviati as a cook and butler.Little is known about his life. He was born in Perugia and died in Rome. After the death of the cardinal, Ripa worked for his relatives...
, first published in 1593, though it is not properly speaking an emblem book but a collection of erudite allegories. Two English emblem books were published in 1635, the famous Emblems of Francis Quarles
Francis Quarles
Francis Quarles was an English poet most famous for his Emblem book aptly entitled Emblems.-Career:Francis was born in Romford, Essex, , and baptised there on 8 May 1592. He traced his ancestry to a family settled in England before the Norman Conquest with a long history in royal service...
, and George Wither
George Wither
George Wither was an English poet, pamphleteer, and satirist. He was a prolific writer who adopted a deliberate plainness of style; he was several times imprisoned. C. V...
's A collection of Emblemes, Ancient and Moderne. Many emblematic works borrowed plates or texts (or both) from earlier exemplars, as was the case with Geoffrey Whitney
Geoffrey Whitney
Geoffrey Whitney was an English poet, now best known for the influence on Elizabethan writing of the Choice of Emblemes that he compiled.-Life:...
's Choice of Emblemes, a compilation which chiefly used the resources of the Plantin Press
Plantin Press
The Plantin Press at Antwerp was one of the focal centers of the fine printed book in the 16th century.Christophe Plantin of Touraine, trained as a bookbinder, fled from Paris, where at least one printer had recently been burned at the stake for heresy, for Antwerp, where he bound books, became a...
in Leyden.