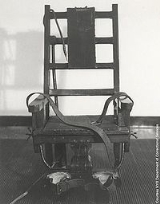 Overview
Execution by electrocution, usually performed using an electric chair, is an execution method originating in the United States in which the condemned person is strapped to a specially built wooden chair and electrocuted
Electric shock
Electric Shock of a body with any source of electricity that causes a sufficient current through the skin, muscles or hair. Typically, the expression is used to denote an unwanted exposure to electricity, hence the effects are considered undesirable....
through electrode
Electrode
An electrode is an electrical conductor used to make contact with a nonmetallic part of a circuit...
s placed on the body. This execution method was created by employees of Thomas Edison
Thomas Edison
Thomas Alva Edison was an American inventor and businessman. He developed many devices that greatly influenced life around the world, including the phonograph, the motion picture camera, and a long-lasting, practical electric light bulb. In addition, he created the world’s first industrial...
, and has been used only in the United States
United States
The United States of America is a federal constitutional republic comprising fifty states and a federal district...
and, for a period of several decades, in the Philippines
Philippines
The Philippines , officially known as the Republic of the Philippines , is a country in Southeast Asia in the western Pacific Ocean. To its north across the Luzon Strait lies Taiwan. West across the South China Sea sits Vietnam...
(its first use there in 1924 under American occupation, last in 1976).

Historically, once the condemned person was attached to the chair
Chair
A chair is a stable, raised surface used to sit on, commonly for use by one person. Chairs are most often supported by four legs and have a back; however, a chair can have three legs or could have a different shape depending on the criteria of the chair specifications. A chair without a back or...
, various cycles (differing in voltage and duration) of alternating current
Alternating current
In alternating current the movement of electric charge periodically reverses direction. In direct current , the flow of electric charge is only in one direction....
would be passed through the individual's body, in order to cause fatal damage to the internal organs (including the brain).

What states still use the electric chair as a method of the death penalty?

Who was the youngest person to sit on the electric chair on the united states?

when did electric chairs stop being used
More

Decline of the electric chair