Encyclopedia
The Liverpool Overhead Railway was the world's first electrically operated overhead railway. The railway was carried mainly on iron viaduct
Viaduct
A viaduct is a bridge composed of several small spans. The term viaduct is derived from the Latin via for road and ducere to lead something. However, the Ancient Romans did not use that term per se; it is a modern derivation from an analogy with aqueduct. Like the Roman aqueducts, many early...
s, with a corrugated iron decking, onto which the tracks were laid. It ran close to the River Mersey
River Mersey
The River Mersey is a river in North West England. It is around long, stretching from Stockport, Greater Manchester, and ending at Liverpool Bay, Merseyside. For centuries, it formed part of the ancient county divide between Lancashire and Cheshire....
in Liverpool
Liverpool
Liverpool is a city and metropolitan borough of Merseyside, England, along the eastern side of the Mersey Estuary. It was founded as a borough in 1207 and was granted city status in 1880...
, England
England
England is a country that is part of the United Kingdom. It shares land borders with Scotland to the north and Wales to the west; the Irish Sea is to the north west, the Celtic Sea to the south west, with the North Sea to the east and the English Channel to the south separating it from continental...
, following the line of Liverpool Docks. The railway opened in 1893 and closed in 1956.

As early as 1852 the railway had been suggested, although it was not until much later that the railway came into existence. Engineers Sir Douglas Fox
Charles Douglas Fox
Sir Douglas Fox was a British civil engineer.-Early life:Douglas was born in Smethwick, Staffordshire, the oldest son of Sir Charles Fox and had two brothers and a sister. Sir Charles was a civil engineer and had designed, amongst other things, The Crystal Palace in Hyde Park...
and James Henry Greathead
James Henry Greathead
James Henry Greathead was an engineer renowned for his work on the London Underground railway.-Early life:Greathead was born in Grahamstown, South Africa; of English descent, Greathead's grandfather had emigrated to South Africa in 1820. He was educated at St Andrew's College, Grahamstown, and the...
were commissioned to design the railway.

The railway was the world's first electric elevated railway and the first to use automatic signalling and electric signal lights.

Special advanced lightweight light-rail passenger cars were designed with each having an electric driving motor. This gave the cars the distinction of being the first light rail
Light rail
Light rail or light rail transit is a form of urban rail public transportation that generally has a lower capacity and lower speed than heavy rail and metro systems, but higher capacity and higher speed than traditional street-running tram systems...
trains. These cars made up the world's first electric multiple unit
Electric multiple unit
An electric multiple unit or EMU is a multiple unit train consisting of self-propelled carriages, using electricity as the motive power. An EMU requires no separate locomotive, as electric traction motors are incorporated within one or a number of the carriages...
trains bearing a strong resemblance to modern EMUs.

The Liverpool Overhead Railway was opened on 4 February 1893 by the Leader of the Opposition the Marquis of Salisbury
Robert Gascoyne-Cecil, 3rd Marquess of Salisbury
Robert Arthur Talbot Gascoyne-Cecil, 3rd Marquess of Salisbury, KG, GCVO, PC , styled Lord Robert Cecil before 1865 and Viscount Cranborne from June 1865 until April 1868, was a British Conservative statesman and thrice Prime Minister, serving for a total of over 13 years...
. The railway ran from Alexandra Dock
Alexandra Dock (LOR) railway station
Alexandra Dock was a station located on the Liverpool Overhead Railway, west of Regent Road and within the MDHC Dock Estate. The station was named after the adjacent Alexandra Dock....
to Herculaneum Dock
Herculaneum Dock railway station
Herculaneum Dock railway station was the original southern terminus for the Liverpool Overhead Railway. Actually adjacent to Harrington Dock it was named after Herculaneum Dock, a somewhat larger dock beyond the end of the line...
, a distance of six miles. It used standard gauge
Standard gauge
The standard gauge is a widely-used track gauge . Approximately 60% of the world's existing railway lines are built to this gauge...
track with 11 intermediate stations along the line. The railway gained the affectionate nickname of Dockers' Umbrella, as a great proportion of the railway was elevated and dockers could walk beneath it as they travelled around the docks.

The line was extended northwards to Seaforth Sands
Seaforth Sands railway station
Seaforth Sands was a terminus station located on the Liverpool Overhead Railway at Seaforth, west of Crosby Road South, Knowsley Road and Rimrose Road junctions.The station opened on 30 April 1894, as a northern extension from Alexandra Dock ....
on 30 April 1894. A further extension southwards from Herculaneum Dock to Dingle
Dingle railway station
Dingle railway station is a disused underground railway station located on the Liverpool Overhead Railway , at the south end of Park Road, Dingle, Liverpool. It was the only below ground station on the line. Trains accessed the station via a half-mile underground tunnel, bored from the cliff face...
was opened on 21 December 1896. Dingle was the line's only underground station and was located on Park Road; the station is now used as a garage. The extension at Herculaneum Dock was achieved with a 200 ft (61 m) lattice girder bridge and then boring a half mile (0.5 miles (804.7 m)) tunnel through the sandstone cliff to Park Road. The tunnel portal and complete underground station are some of the few surviving signs of the railway's existence.

The purpose-designed trains used on the Overhead Railway were revolutionary, setting the standard used world-wide today. They were the world's first electric multiple unit
Electric multiple unit
An electric multiple unit or EMU is a multiple unit train consisting of self-propelled carriages, using electricity as the motive power. An EMU requires no separate locomotive, as electric traction motors are incorporated within one or a number of the carriages...
(EMU) trains, requiring no locomotive, and the first light-rail trains. In the southern extension the EMUs were also the first to be used underground. Within eighty years most passenger journeys in Britain were being made on trains that worked on the multiple-unit principle.

The initial two-coach trains combined both traction and passenger carriage into one self-contained unit. This was later increased to a three-coach multiple unit consisting of a motor coach at each end of the train and a trailer coach between. The power coaches had electric motors mounted beneath the floor, a driving cab at one end and third class accommodation with wooden seats. The unpowered central coach was for first class passengers, and was fitted with leather-covered seats.

An original example was retained by the Liverpool Museum and an example of a modernised carriage is stored at the Electric Railway Museum, Baginton
Coventry Railway Centre
The Electric Railway Museum is located in Warwickshire, south of Coventry city, outside Baginton, and near to Coventry Airport. The heritage railway centre was also known as "The Airfield Line" as the railway was built on the site of a greenfield...
.

During World War II
World War II
World War II, or the Second World War , was a global conflict lasting from 1939 to 1945, involving most of the world's nations—including all of the great powers—eventually forming two opposing military alliances: the Allies and the Axis...
, the railway suffered extensively from bomb damage. As a purely local undertaking, it was not nationalised
Nationalization
Nationalisation, also spelled nationalization, is the process of taking an industry or assets into government ownership by a national government or state. Nationalization usually refers to private assets, but may also mean assets owned by lower levels of government, such as municipalities, being...
in 1948 with the rest of the British railway system. In the late 1940s and early 1950s, the Company started to modernise some of the carriages, incorporating sliding doors. The line continued to carry large numbers of passengers, especially dock workers. 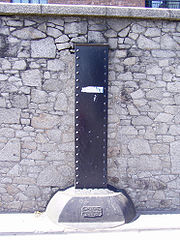 The railway was carried mainly on iron viaducts, with a corrugated iron decking, onto which the tracks were laid. As such, it was vulnerable to corrosion - especially as the steam-operated Docks Railway operated beneath some sections of the line. During surveys it was discovered that expensive repairs would be necessary to ensure the line's long term survival, at a cost of £2 million. The Liverpool Overhead Railway Company could not afford such costs and looked to both Liverpool City Council
Liverpool City Council
Liverpool City Council is the governing body for the city of Liverpool in Merseyside, England. It consists of 90 councillors, three for each of the city's 30 wards. The council is currently controlled by the Labour Party and is led by Joe Anderson.-Domain:...
and the Mersey Docks and Harbour Board for financial assistance. This was to no avail.

The Liverpool Overhead Railway Company had no option but to go into voluntary liquidation. Accordingly, and despite considerable protest, the line was closed on the evening of 30 December 1956. The final trains each left either end of the line, marking the closure with a loud bang as they passed each other. Both trains were full to capacity with wellwishers and employees of the company.

The service was replaced by a bus service (route number 1) operated by Liverpool Corporation, which could not compete with its predecessor's much faster service, due to congestion along the Dock Road. The public continued to campaign for the railway to reopen, albeit in vain.

Demolition of the structure commenced in September 1957, with the whole structure being dismantled by the following year. The bridges were removed for scrap, leaving very little trace of the railway, save for a small number of upright columns found in the walls at Wapping and the tunnel portal at Dingle.

The railway is featured in the final scenes of the film The Clouded Yellow
The Clouded Yellow
The Clouded Yellow is a 1951 British mystery film directed by Ralph Thomas and produced by Betty E. Box for Carillon Films.-Plot synopsis:...
(1951), as the character played by Jean Simmons
Jean Simmons
Jean Merilyn Simmons, OBE was an English actress. She appeared predominantly in motion pictures, beginning with films made in Great Britain during and after World War II – she was one of J...
uses the railway to travel to one of the docks. Extensive archive footage of the railway appears in Of Time and the City
Of Time and the City
Of Time and the City is a 2008 documentary film directed by Terence Davies.The film has Davies recalling his life growing up in Liverpool in the 1950s and 1960s, using newsreel and documentary footage supplemented by his own commentary voiceover and contemporaneous and classical music...
, a "cinematic autobiographical poem" made by British film-maker Terence Davies to celebrate Liverpool's 2008 reign as Capital of Culture.