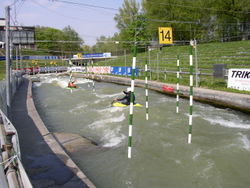 The Eiskanal is an artificial canal
Artificial whitewater
An artificial whitewater course is a site for whitewater canoeing, whitewater kayaking, whitewater racing, whitewater rafting, playboating and slalom canoeing with artificially generated rapids.-Flow diversion:...
feature in the city of Augsburg
Augsburg
Augsburg is a city in the south-west of Bavaria, Germany. It is a university town and home of the Regierungsbezirk Schwaben and the Bezirk Schwaben. Augsburg is an urban district and home to the institutions of the Landkreis Augsburg. It is, as of 2008, the third-largest city in Bavaria with a...
, Germany
Germany
Germany , officially the Federal Republic of Germany , is a federal parliamentary republic in Europe. The country consists of 16 states while the capital and largest city is Berlin. Germany covers an area of 357,021 km2 and has a largely temperate seasonal climate...
that was constructed as the canoe slalom
Canoeing at the 1972 Summer Olympics
At the 1972 Summer Olympics in Munich, seven events in sprint canoe racing were contested, and for the first time at the Olympic Games, four events in slalom canoeing were also contested.-Slalom:-Men's events:-Women's events:-Medal table:...
venue for the 1972 Summer Olympics
1972 Summer Olympics
The 1972 Summer Olympics, officially known as the Games of the XX Olympiad, were an international multi-sport event held in Munich, West Germany, from August 26 to September 11, 1972....
that were hosted in Munich
Munich
Munich The city's motto is "" . Before 2006, it was "Weltstadt mit Herz" . Its native name, , is derived from the Old High German Munichen, meaning "by the monks' place". The city's name derives from the monks of the Benedictine order who founded the city; hence the monk depicted on the city's coat...
.

The first artificial whitewater course of its kind, it has served as a prototype for numerous artificial courses since constructed, such as the Parc Olímpic del Segre
Parc Olímpic del Segre
Parc Olímpic del Segre is a canoeing and kayaking facility in La Seu d'Urgell, Catalonia, Spain, built in 1990 for use during the 1992 Summer Olympics in Barcelona....
course in La Seu d'Urgell
La Seu d'Urgell
La Seu d'Urgell is a town located in the Catalan Pyrenees in Spain. La Seu d'Urgell is also the capital of the comarca Alt Urgell, head of the judicial district of la Seu d'Urgell and the seat of Bishop of Urgell, one of the Andorra co-princes...
, Spain
Spain
Spain , officially the Kingdom of Spain languages]] under the European Charter for Regional or Minority Languages. In each of these, Spain's official name is as follows:;;;;;;), is a country and member state of the European Union located in southwestern Europe on the Iberian Peninsula...
, built for the 1992 Olympic Games
1992 Summer Olympics
The 1992 Summer Olympic Games, officially known as the Games of the XXV Olympiad, were an international multi-sport event celebrated in Barcelona, Catalonia, Spain, in 1992. The International Olympic Committee voted in 1986 to separate the Summer and Winter Games, which had been held in the same...
in Barcelona
Barcelona
Barcelona is the second largest city in Spain after Madrid, and the capital of Catalonia, with a population of 1,621,537 within its administrative limits on a land area of...
; the Dickerson Whitewater Course
Dickerson Whitewater Course
The Dickerson Whitewater Course, on the Potomac River near Dickerson Maryland, was built for use by canoe and kayak paddlers training for the 1992 Olympic Games in Spain. It was the first pump-powered artificial whitewater course built in North America, and is still the only one anywhere with...
, a U.S. training facility for the 1992 Olympic Games; the Penrith Whitewater Stadium
Penrith Whitewater Stadium
The Penrith Whitewater Stadium is located near Sydney, Australia. It is an artificial whitewater sporting facility which hosted the canoe/kayak slalom events at the 2000 Summer Olympics in Sydney. The facility is part of the Penrith Lakes Scheme, which is converting open-pit sand and gravel mines...
in Sydney
Sydney
Sydney is the most populous city in Australia and the state capital of New South Wales. Sydney is located on Australia's south-east coast of the Tasman Sea. As of June 2010, the greater metropolitan area had an approximate population of 4.6 million people...
, Australia
Australia
Australia , officially the Commonwealth of Australia, is a country in the Southern Hemisphere comprising the mainland of the Australian continent, the island of Tasmania, and numerous smaller islands in the Indian and Pacific Oceans. It is the world's sixth-largest country by total area...
, built for the 2000 Olympic Games
2000 Summer Olympics
The Sydney 2000 Summer Olympic Games or the Millennium Games/Games of the New Millennium, officially known as the Games of the XXVII Olympiad, were an international multi-sport event which was celebrated between 15 September and 1 October 2000 in Sydney, New South Wales, Australia...
; in Prague
Prague
Prague is the capital and largest city of the Czech Republic. Situated in the north-west of the country on the Vltava river, the city is home to about 1.3 million people, while its metropolitan area is estimated to have a population of over 2.3 million...
, The Czech Republic; in Bratislava
Bratislava
Bratislava is the capital of Slovakia and, with a population of about 431,000, also the country's largest city. Bratislava is in southwestern Slovakia on both banks of the Danube River. Bordering Austria and Hungary, it is the only national capital that borders two independent countries.Bratislava...
, Slovakia
Slovakia
The Slovak Republic is a landlocked state in Central Europe. It has a population of over five million and an area of about . Slovakia is bordered by the Czech Republic and Austria to the west, Poland to the north, Ukraine to the east and Hungary to the south...
; in Athens
Athens
Athens , is the capital and largest city of Greece. Athens dominates the Attica region and is one of the world's oldest cities, as its recorded history spans around 3,400 years. Classical Athens was a powerful city-state...
, Greece
Greece
Greece , officially the Hellenic Republic , and historically Hellas or the Republic of Greece in English, is a country in southeastern Europe....
, built for the 2004 Olympic Games; and most recently in Charlotte
CHARLOTTE
- CHARLOTTE :CHARLOTTE is an American blues-based hard rock band that formed in Los Angeles, California in 1986. Currently, they are signed to indie label, Eonian Records, under which they released their debut cd, Medusa Groove, in 2010. Notable Charlotte songs include 'Siren', 'Little Devils',...
, North Carolina
North Carolina
North Carolina is a state located in the southeastern United States. The state borders South Carolina and Georgia to the south, Tennessee to the west and Virginia to the north. North Carolina contains 100 counties. Its capital is Raleigh, and its largest city is Charlotte...
.

The Eiskanal is still considered a world-class venue, and hosts many World Cup and other international races.