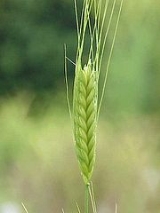 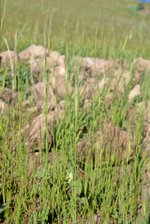 Einkorn wheat can refer either to the wild species of wheat
Wheat
Wheat is a cereal grain, originally from the Levant region of the Near East, but now cultivated worldwide. In 2007 world production of wheat was 607 million tons, making it the third most-produced cereal after maize and rice...
, Triticum boeoticum (the spelling baeoticum is also common), or to the domesticated form, Triticum monococcum. The wild and domesticated forms are either considered separate species, as here, or as subspecies of T. monococcum. Einkorn is a diploid species of hulled wheat, with tough glumes ('husk
Husk
Husk in botany is the outer shell or coating of a seed. It often refers to the leafy outer covering of an ear of maize as it grows on the plant. Literally, a husk or hull includes the protective outer covering of a seed, fruit or vegetable...
s') that tightly enclose the grain
GRAIN
GRAIN is a small international non-profit organisation that works to support small farmers and social movements in their struggles for community-controlled and biodiversity-based food systems. Our support takes the form of independent research and analysis, networking at local, regional and...
s. The cultivated form is similar to the wild, except that the ear stays intact when ripe and the seeds are larger.

Einkorn wheat was one of the earliest cultivated forms
Neolithic founder crops
The Neolithic founder crops are the eight plant species that were domesticated by early Holocene farming communities in the Fertile Crescent region of southwest Asia, and which formed the basis of systematic agriculture in the Middle East, North Africa, India, Persia and Europe...
of wheat, alongside emmer wheat (T. dicoccum). Grains of wild einkorn have been found in Epi-Paleolithic sites of the Fertile Crescent
Fertile Crescent
The Fertile Crescent, nicknamed "The Cradle of Civilization" for the fact the first civilizations started there, is a crescent-shaped region containing the comparatively moist and fertile land of otherwise arid and semi-arid Western Asia. The term was first used by University of Chicago...
. It was first domesticated approximately 7500 BC (7050 BC ≈ 9000 BP
Before Present
Before Present years is a time scale used in archaeology, geology, and other scientific disciplines to specify when events in the past occurred. Because the "present" time changes, standard practice is to use AD 1950 as the origin of the age scale, reflecting the fact that radiocarbon...
), in the Pre-Pottery Neolithic A
Pre-Pottery Neolithic A
Pre-Pottery Neolithic A denotes the first stage in early Levantine Neolithic culture, dating around 9500 to 8500 BC. Archaeological remains are located in the Levantine and upper Mesopotamian region of the Fertile Crescent...
(PPNA) or B
Pre-Pottery Neolithic B
Pre-Pottery Neolithic B is a division of the Neolithic developed by Dame Kathleen Kenyon during her archaeological excavations at Jericho in the southern Levant region....
(PPNB) periods. Evidence from DNA finger-printing suggests einkorn was domesticated near Karaca Dağ
Karaca Dag
Karaca is a shield volcano located in eastern Turkey. According to Der Spiegel of either 6 March or 3 June 2006, the Max Planck Institute for Breeding Research in Cologne has discovered that the genetically common ancestor of 68 contemporary types of cereal still grows as a wild plant on the slopes...
in southeast Turkey, an area in which a number of PPNB
Pre-Pottery Neolithic B
Pre-Pottery Neolithic B is a division of the Neolithic developed by Dame Kathleen Kenyon during her archaeological excavations at Jericho in the southern Levant region....
farming villages have been found. Its cultivation decreased in the Bronze Age
Bronze Age
The Bronze Age is a period characterized by the use of copper and its alloy bronze as the chief hard materials in the manufacture of some implements and weapons. Chronologically, it stands between the Stone Age and Iron Age...
, and today it is a relict
Relict
A relict is a surviving remnant of a natural phenomenon.* In biology a relict is an organism that at an earlier time was abundant in a large area but now occurs at only one or a few small areas....
crop that is rarely planted, though it has found a new market as a health food. It remains as a local crop, often for bulgur
Bulgur
Bulgur is a cereal food made from several different wheat species, most often from durum wheat. In the United States it is most often made from white wheat. Its use is most common in Middle Eastern cuisine, Iran, Turkey, Greece, Armenia and Bulgaria...
(cracked wheat) or as animal feed, in mountainous areas of France
France
The French Republic , The French Republic , The French Republic , (commonly known as France , is a unitary semi-presidential republic in Western Europe with several overseas territories and islands located on other continents and in the Indian, Pacific, and Atlantic oceans. Metropolitan France...
, Morocco
Morocco
Morocco , officially the Kingdom of Morocco , is a country located in North Africa. It has a population of more than 32 million and an area of 710,850 km², and also primarily administers the disputed region of the Western Sahara...
, the former Yugoslavia
Yugoslavia
Yugoslavia refers to three political entities that existed successively on the western part of the Balkans during most of the 20th century....
, Turkey
Turkey
Turkey , known officially as the Republic of Turkey , is a Eurasian country located in Western Asia and in East Thrace in Southeastern Europe...
and other countries. It often survives on poor soils where other species of wheat fail.

In contrast with more modern forms of wheat, there is evidence that the gliadin
Gliadin
Gliadin is a glycoprotein present in wheat and several other cereals within the grass genus Triticum. Gliadins are prolamins and are separated on the basis of electrophoretic mobility and isoelectric focusing.- Types :...
protein of einkorn may not be as toxic to sufferers of coeliac disease
Coeliac disease
Coeliac disease , is an autoimmune disorder of the small intestine that occurs in genetically predisposed people of all ages from middle infancy onward...
. It has yet to be recommended in any gluten-free diet
Gluten-free diet
A gluten-free diet is a diet that excludes foods containing gluten. Gluten is a protein found in wheat , barley, rye, malts and triticale. It is used as a food additive in the form of a flavoring, stabilizing or thickening agent, often as "dextrin"...
. Einkorn wheat does contain gluten but is different from most wheats in that it contains only 14 chromosomes as opposed to 28 in emmer or 42 in modern wheats. This alters the gluten structure which may be why it does not affect those with gluten intolerance as much as other wheats.