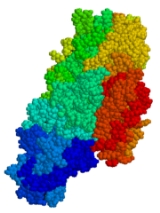 Overview
Gliadin is a glycoprotein
Glycoprotein
Glycoproteins are proteins that contain oligosaccharide chains covalently attached to polypeptide side-chains. The carbohydrate is attached to the protein in a cotranslational or posttranslational modification. This process is known as glycosylation. In proteins that have segments extending...
present in wheat
Wheat
Wheat is a cereal grain, originally from the Levant region of the Near East, but now cultivated worldwide. In 2007 world production of wheat was 607 million tons, making it the third most-produced cereal after maize and rice...
and several other cereal
Cereal
Cereals are grasses cultivated for the edible components of their grain , composed of the endosperm, germ, and bran...
s within the grass genus Triticum. Gliadins are prolamin
Prolamin
Prolamins are a group of plant storage proteins having a high proline content and found in the seeds of cereal grains: wheat , barley , rye , corn , sorghum and as a minor protein, avenin in oats. They are characterised by a high glutamine and proline content and are generally soluble only in...
s and are separated on the basis of electrophoretic
Electrophoresis
Electrophoresis, also called cataphoresis, is the motion of dispersed particles relative to a fluid under the influence of a spatially uniform electric field. This electrokinetic phenomenon was observed for the first time in 1807 by Reuss , who noticed that the application of a constant electric...
mobility and isoelectric focusing
Isoelectric focusing
Isoelectric focusing , also known as electrofocusing, is a technique for separating different molecules by their electric charge differences...
.

Gliadins are known for their role, along with glutenin
Glutenin
Glutenin is the glutelin derived from wheat. Gluteninis a protein best known for its role, along with gliadin, in the creation of gluten with its disulfide inter- and intra-molecule links. Glutenin consists of 20% HMW subunits, which are relatively low in sulfur...
, in the formation of gluten
Gluten
Gluten is a protein composite found in foods processed from wheat and related grain species, including barley and rye...
.

What harm does wheat do to you if you have high gliadine, and is there an enzyme you can take to be able to eat wheat again?

Do people with high gliadin need to stay off wheat, and to what extent?
More
x