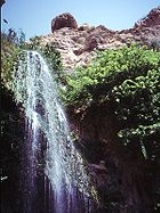 Encyclopedia
Ein Gedi is an oasis
Oasis
In geography, an oasis or cienega is an isolated area of vegetation in a desert, typically surrounding a spring or similar water source...
in Israel
Israel
The State of Israel is a parliamentary republic located in the Middle East, along the eastern shore of the Mediterranean Sea...
, located west of the Dead Sea
Dead Sea
The Dead Sea , also called the Salt Sea, is a salt lake bordering Jordan to the east and Israel and the West Bank to the west. Its surface and shores are below sea level, the lowest elevation on the Earth's surface. The Dead Sea is deep, the deepest hypersaline lake in the world...
, near Masada
Masada
Masada is the name for a site of ancient palaces and fortifications in the South District of Israel, on top of an isolated rock plateau, or horst, on the eastern edge of the Judean Desert, overlooking the Dead Sea. Masada is best known for the violence that occurred there in the first century CE...
and the caves of Qumran
Qumran
Qumran is an archaeological site in the West Bank. It is located on a dry plateau about a mile inland from the northwestern shore of the Dead Sea, near the Israeli settlement and kibbutz of Kalia...
.

In the it is identified with Hazazon-tamar, where the Moabites and Ammon
Ammon
Ammon , also referred to as the Ammonites and children of Ammon, was an ancient nation located east of the Jordan River, Gilead, and the Dead Sea, in present-day Jordan. The chief city of the country was Rabbah or Rabbath Ammon, site of the modern city of Amman, Jordan's capital...
ites gathered in order to fight Josaphat. In Hazazon-tamar is mentioned as being a Amorite
Amorite
Amorite refers to an ancient Semitic people who occupied large parts of Mesopotamia from the 21st Century BC...
city, smitten by Chedorlaomer
Chedorlaomer
Chedorlaomer "a handful of sheaves", was a king of Elam according to the Hebrew Bible book of Genesis Chapter 14. He ruled fourteen years, from the East in southwestern Persia, occupying the regions east of the Jordan river, in the days of Abram...
in his war against the cities of the plain.

In , Ein Gedi is enumerated among the cities of the Tribe of Judah
Tribe of Judah
According to the Hebrew Bible, the Tribe of Judah was one of the Tribes of Israel.Following the completion of the conquest of Canaan by the Israelite tribes after about 1200 BCE, Joshua allocated the land among the twelve tribes....
in the desert Betharaba, but shows that it was also a fisherman's town. Later, King David
David
David was the second king of the united Kingdom of Israel according to the Hebrew Bible and, according to the Gospels of Matthew and Luke, an ancestor of Jesus Christ through both Saint Joseph and Mary...
hides in the desert of En Gedi and King Saul
Saul
-People:Saul is a given/first name in English, the Anglicized form of the Hebrew name Shaul from the Hebrew Bible:* Saul , including people with this given namein the Bible:* Saul , a king of Edom...
seeks him "even upon the most craggy rocks, which are accessible only to wild goats" .

The Song of Songs
Song of songs
Song of Songs, also known as the Song of Solomon, is a book of the Hebrew Bible or Old Testament. It may also refer to:In music:* Song of songs , the debut album by David and the Giants* A generic term for medleysPlays...
speaks of the "vineyards of En Gedi"; the words, "I was exalted like a palm tree in Cades" (’en aígialoîs), which occur in Ecclesiasticus
Sirach
The Book of the All-Virtuous Wisdom of Jesus ben Sira , commonly called the Wisdom of Sirach or simply Sirach, and also known as Ecclesiasticus or Siracides , is a work from the early 2nd century B.C. written by the Jewish scribe Jesus ben Sirach of Jerusalem...
24:18, may perhaps be understood of the palm trees of Ein Gedi.

The indigenous Jewish town of Ein Gedi was an important source of balsam
Balsam of Mecca
Balsam of Mecca is a resinous gum of the tree Commiphora gileadensis , native to southern Arabia and also naturalized, in ancient and again in modern times, in ancient Judea/Palestine/Israel. The most famous site of balsam production in the region was the Jewish town of Ein Gedi...
for the Greco-Roman world until its destruction by Byzantine emperor Justinian as part of his persecution of the Jews in his realm. A synagogue mosaic remains from Ein Gedi's heyday, including a Judeo-Aramaic inscription warning inhabitants against "revealing the town's secret" – possibly the methods for extraction and preparation of the much-prized balsam resin, though not stated outright in the inscription – to the outside world.

In April 1848, Lieutenant William Francis Lynch led an American expedition down the Jordan River into the Dead Sea
Dead Sea
The Dead Sea , also called the Salt Sea, is a salt lake bordering Jordan to the east and Israel and the West Bank to the west. Its surface and shores are below sea level, the lowest elevation on the Earth's surface. The Dead Sea is deep, the deepest hypersaline lake in the world...
, that stopped at En Gedi (Ain Jidy).

Ein Gedi nature reserve was declared in 1971 and is one of the most important reserves in Israel. The park is situated on the eastern border of the Judean Desert
Judean desert
The Judaean Desert is a desert in Israel and the West Bank that lies east of Jerusalem and descends to the Dead Sea. It stretches from the northeastern Negev to the east of Beit El, and is marked by terraces with escarpments. It ends in a steep escarpment dropping to the Dead Sea and the Jordan...
, on the Dead Sea coast, and covers an area of 14000 dunam
Dunam
A dunam or dönüm, dunum, donum, dynym, dulum was a non-SI unit of land area used in the Ottoman Empire and representing the amount of land that can be plowed in a day; its value varied from 900–2500 m²...
s. The elevation of the land ranges from the level of the Dead Sea
Dead Sea
The Dead Sea , also called the Salt Sea, is a salt lake bordering Jordan to the east and Israel and the West Bank to the west. Its surface and shores are below sea level, the lowest elevation on the Earth's surface. The Dead Sea is deep, the deepest hypersaline lake in the world...
at 423 meters (1,388 ft) below sea level to the plateau of the Judean Desert at 200 meters above sea level. Ein Gedi nature reserve includes two spring-fed streams with flowing water year-round: Nahal David and Nahal Arugot. Two other springs, the Shulamit and Ein Gedi springs, also flow in the reserve. Together, the springs generate approximately three million cubic meters of water per year. Much of the water is used for agriculture or is bottled for consumption. The reserve is a sanctuary for many types of plant, bird and animal species. The vegetation includes plants and trees from the tropical, desert, Mediterranean, and steppian regions, such as Sodom apple, acacia
Acacia
Acacia is a genus of shrubs and trees belonging to the subfamily Mimosoideae of the family Fabaceae, first described in Africa by the Swedish botanist Carl Linnaeus in 1773. Many non-Australian species tend to be thorny, whereas the majority of Australian acacias are not...
, jujube
Jujube
Ziziphus zizyphus , commonly called jujube , red date, Chinese date, Korean date, or Indian date is a species of Ziziphus in the buckthorn family Rhamnaceae, used primarily as a fruiting shade tree.-Distribution:Its precise natural distribution is uncertain due to extensive cultivation,...
, and poplar
Poplar
Populus is a genus of 25–35 species of deciduous flowering plants in the family Salicaceae, native to most of the Northern Hemisphere. English names variously applied to different species include poplar , aspen, and cottonwood....
. The many species of resident birds are supplemented by over 200 additional species during the migration periods in the spring and fall. Mammal species include the ibex and the hyrax
Hyrax
A hyrax is any of four species of fairly small, thickset, herbivorous mammals in the order Hyracoidea. The rock hyrax Procavia capensis, the yellow-spotted rock hyrax Heterohyrax brucei, the western tree hyrax Dendrohyrax dorsalis, and the southern tree hyrax, Dendrohyrax arboreus live in Africa...
. In the summer of 2005, nearly two-thirds of the oasis burned
Wildfire
A wildfire is any uncontrolled fire in combustible vegetation that occurs in the countryside or a wilderness area. Other names such as brush fire, bushfire, forest fire, desert fire, grass fire, hill fire, squirrel fire, vegetation fire, veldfire, and wilkjjofire may be used to describe the same...
to the ground after a visitor dropped a lit cigarette
Cigarette
A cigarette is a small roll of finely cut tobacco leaves wrapped in a cylinder of thin paper for smoking. The cigarette is ignited at one end and allowed to smoulder; its smoke is inhaled from the other end, which is held in or to the mouth and in some cases a cigarette holder may be used as well...
.

Kibbutz
Kibbutz
A kibbutz is a collective community in Israel that was traditionally based on agriculture. Today, farming has been partly supplanted by other economic branches, including industrial plants and high-tech enterprises. Kibbutzim began as utopian communities, a combination of socialism and Zionism...
Ein Gedi, founded in 1956, is located about a kilometer from the oasis. It offers various tourist attractions and takes advantage of the local weather patterns and the abundance of natural water to cultivate out-of-season produce. The kibbutz area contains an internationally acclaimed botanical garden covering an area of 100 dunam
Dunam
A dunam or dönüm, dunum, donum, dynym, dulum was a non-SI unit of land area used in the Ottoman Empire and representing the amount of land that can be plowed in a day; its value varied from 900–2500 m²...
s (10 ha
Hectare
The hectare is a metric unit of area defined as 10,000 square metres , and primarily used in the measurement of land. In 1795, when the metric system was introduced, the are was defined as being 100 square metres and the hectare was thus 100 ares or 1/100 km2...
, 24.7 acre
Acre
The acre is a unit of area in a number of different systems, including the imperial and U.S. customary systems. The most commonly used acres today are the international acre and, in the United States, the survey acre. The most common use of the acre is to measure tracts of land.The acre is related...
s). There one can find more than 900 species of plants from all over the world.

The Ein Gedi race, also known as the Shalom Marathon – Dead Sea Half Marathon is a popular road running event over several distances that has been held by the Tamar Regional Council since 1983. The starting point for all races is the Ein Gedi Spa
Ein Gedi Spa
Ein Gedi Spa is a wellness center along the Dead Sea, Israel, fed by the waters of the Dead Sea. It provides health by the four elements of the area: water, air, sun, and mud. The spa has hot pools that are filled with sulphur water. It is a famous attraction on the shore of the Dead Sea.The spa is...
, 80 kilometres (49.7 mi) southeast of Jerusalem and 4 kilometers south of Kibbutz Ein Gedi