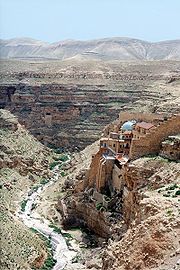 The Judaean Desert is a desert in Israel
Israel
The State of Israel is a parliamentary republic located in the Middle East, along the eastern shore of the Mediterranean Sea...
and the West Bank
West Bank
The West Bank ) of the Jordan River is the landlocked geographical eastern part of the Palestinian territories located in Western Asia. To the west, north, and south, the West Bank shares borders with the state of Israel. To the east, across the Jordan River, lies the Hashemite Kingdom of Jordan...
that lies east of Jerusalem and descends to the Dead Sea
Dead Sea
The Dead Sea , also called the Salt Sea, is a salt lake bordering Jordan to the east and Israel and the West Bank to the west. Its surface and shores are below sea level, the lowest elevation on the Earth's surface. The Dead Sea is deep, the deepest hypersaline lake in the world...
. It stretches from the northeastern Negev
Negev
The Negev is a desert and semidesert region of southern Israel. The Arabs, including the native Bedouin population of the region, refer to the desert as al-Naqab. The origin of the word Neghebh is from the Hebrew root denoting 'dry'...
to the east of Beit El
Beit El
Beit El is an Israeli settlement and a local council in the Benjamin region of the central West Bank, within the borders of the Matte Binyamin Regional Council. The religiously observant town is located in the hills north of Jerusalem east of the Palestinian city of al-Bireh. In 2009, it had a...
, and is marked by terraces with escarpments. It ends in a steep escarpment dropping to the Dead Sea and the Jordan Valley. The Judaean Desert is crossed by numerous wādi
Wadi
Wadi is the Arabic term traditionally referring to a valley. In some cases, it may refer to a dry riverbed that contains water only during times of heavy rain or simply an intermittent stream.-Variant names:...
s from northeast to southeast, and has many nahal
Ravine
A ravine is a landform narrower than a canyon and is often the product of streamcutting erosion. Ravines are typically classified as larger in scale than gullies, although smaller than valleys. A ravine is generally a fluvial slope landform of relatively steep sides, on the order of twenty to...
s, most of them deep, from 1,200 feet in the west to 600 feet in the east. Judaean Desert is an area with a special morphological structure along the east of the Judaean Mountains.

The Judaean desert lies east of Jerusalem and descends to the Dead Sea
Dead Sea
The Dead Sea , also called the Salt Sea, is a salt lake bordering Jordan to the east and Israel and the West Bank to the west. Its surface and shores are below sea level, the lowest elevation on the Earth's surface. The Dead Sea is deep, the deepest hypersaline lake in the world...
. Rainfall in the Judaea region varies from 400–500 mm (15.7–19.7 in) in the western hills, rising to 600 millimetres (23.6 in) around western Jerusalem (in central Judaea), falling back to 400 millimetres (15.7 in) in eastern Jerusalem and dropping to around 100mm in the eastern parts, due to a rainshadow effect. The climate ranges from Mediterranean
Mediterranean climate
A Mediterranean climate is the climate typical of most of the lands in the Mediterranean Basin, and is a particular variety of subtropical climate...
in the west and desert climate
Desert climate
A desert climate , also known as an arid climate, is a climate that does not meet the criteria to be classified as a polar climate, and in which precipitation is too low to sustain any vegetation at all, or at most a very scanty scrub.An area that features this climate usually experiences less than...
in the east, with a strip of steppe climate in the middle. Major urban areas in the region include Jerusalem, Bethlehem
Bethlehem
Bethlehem is a Palestinian city in the central West Bank of the Jordan River, near Israel and approximately south of Jerusalem, with a population of about 30,000 people. It is the capital of the Bethlehem Governorate of the Palestinian National Authority and a hub of Palestinian culture and tourism...
, the Gush Etzion
Gush Etzion
Gush Etzion is a cluster of Israeli settlements located in the Judaean Mountains directly south of Jerusalem and Bethlehem in the West Bank, Palestinian territories. The core group includes four agricultural villages that were founded in 1940-1947 on property purchased in the 1920s and 1930s, and ...
, Jericho and Hevron.