Encyclopedia
Ahr is a river
River
A river is a natural watercourse, usually freshwater, flowing towards an ocean, a lake, a sea, or another river. In a few cases, a river simply flows into the ground or dries up completely before reaching another body of water. Small rivers may also be called by several other names, including...
in Germany
Germany
Germany , officially the Federal Republic of Germany , is a federal parliamentary republic in Europe. The country consists of 16 states while the capital and largest city is Berlin. Germany covers an area of 357,021 km2 and has a largely temperate seasonal climate...
, a left tributary of the Rhine. Its source is at an elevation of approximately 470 metres above sea level in Blankenheim
Blankenheim, North Rhine-Westphalia
Blankenheim is a municipality in the district of Euskirchen in the state of North Rhine-Westphalia, Germany.-Geography:Blankenheim is located in the Eifel hills, approx. 27 km south-west of Euskirchen...
in the Eifel
Eifel
The Eifel is a low mountain range in western Germany and eastern Belgium. It occupies parts of southwestern North Rhine-Westphalia, northwestern Rhineland-Palatinate and the south of the German-speaking Community of Belgium....
, in the cellar of a timber-frame
Timber framing
Timber framing , or half-timbering, also called in North America "post-and-beam" construction, is the method of creating structures using heavy squared off and carefully fitted and joined timbers with joints secured by large wooden pegs . It is commonplace in large barns...
house near the castle of Blankenheim. After 18 kilometres it crosses from North Rhine-Westphalia
North Rhine-Westphalia
North Rhine-Westphalia is the most populous state of Germany, with four of the country's ten largest cities. The state was formed in 1946 as a merger of the northern Rhineland and Westphalia, both formerly part of Prussia. Its capital is Düsseldorf. The state is currently run by a coalition of the...
into Rhineland-Palatinate
Rhineland-Palatinate
Rhineland-Palatinate is one of the 16 states of the Federal Republic of Germany. It has an area of and about four million inhabitants. The capital is Mainz. English speakers also commonly refer to the state by its German name, Rheinland-Pfalz ....
. 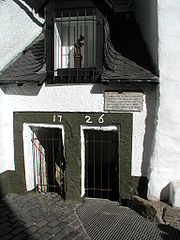 The Ahr and its tributaries are a main drainage system of the eastern Eifel
Eifel
The Eifel is a low mountain range in western Germany and eastern Belgium. It occupies parts of southwestern North Rhine-Westphalia, northwestern Rhineland-Palatinate and the south of the German-speaking Community of Belgium....
. The watershed is approximately 900 km². Tributaries of the Ahr are (from the mouth to the source): Harbach (Ahr), Hellenbach, Bachemer Bach, Leimersdorfer Bach, Liersbach, Vischelbach, Sahrbach, Kesselinger Bach, Armuthsbach
Armuthsbach
Armuthsbach is a river of North Rhine-Westphalia, Germany....
, Dreisbach (brook), Eichenbach
Eichenbach
Eichenbach is a municipality in the district of Ahrweiler, in Rhineland-Palatinate, Germany....
, Adenauer Bach, Trierbach and Ahbach.

There were isolated settlements in the Ahr valley beginning at the latest in Roman
Ancient Rome
Ancient Rome was a thriving civilization that grew on the Italian Peninsula as early as the 8th century BC. Located along the Mediterranean Sea and centered on the city of Rome, it expanded to one of the largest empires in the ancient world....
times, evidenced by the Roman villa near Ahrweiler. Owing to their isolated location, the upper and middle parts of the course were sparsely populated.

That changed from the mid-19th century. The development of the settlements, the traffic routes and the agricultural areas in the Ahr valley led to the fact that the riverbed was fixed.

The Ahr valley makes up the Ahr wine region
Ahr (wine region)
Ahr is a wine region for quality wine in Germany, and is located in the valley of the river Ahr, a tributary of Rhine, and is situated in the federal state of Rhineland-Palatinate. With only of vines as of 2008, it is one of smaller of Germany's 13 regions...
, which is small but noted for its red wines made from the Pinot noir
Pinot Noir
Pinot noir is a black wine grape variety of the species Vitis vinifera. The name may also refer to wines created predominantly from Pinot noir grapes...
variety.