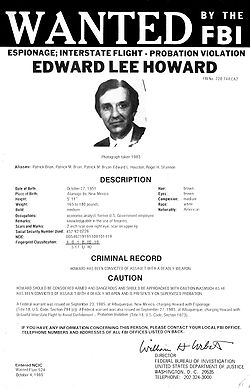 Edward Lee Victor Howard (27 October 1951, Alamogordo, New Mexico
New Mexico
New Mexico is a state located in the southwest and western regions of the United States. New Mexico is also usually considered one of the Mountain States. With a population density of 16 per square mile, New Mexico is the sixth-most sparsely inhabited U.S...
– 12 July 2002, Moscow
Moscow
Moscow is the capital, the most populous city, and the most populous federal subject of Russia. The city is a major political, economic, cultural, scientific, religious, financial, educational, and transportation centre of Russia and the continent...
) was a CIA case officer who defected to the Soviet Union
Soviet Union
The Soviet Union , officially the Union of Soviet Socialist Republics , was a constitutionally socialist state that existed in Eurasia between 1922 and 1991....
.

Howard served as a Peace Corps
Peace Corps
The Peace Corps is an American volunteer program run by the United States Government, as well as a government agency of the same name. The mission of the Peace Corps includes three goals: providing technical assistance, helping people outside the United States to understand US culture, and helping...
volunteer in Bucaramanga
Bucaramanga
Bucaramanga is a Colombian city, and capital city of the department of Santander, Colombia. Bucaramanga has the fifth largest city economy and sixth largest population in Colombia, with 1,212,656 people in its metropolitan area...
, Colombia
Colombia
Colombia, officially the Republic of Colombia , is a unitary constitutional republic comprising thirty-two departments. The country is located in northwestern South America, bordered to the east by Venezuela and Brazil; to the south by Ecuador and Peru; to the north by the Caribbean Sea; to the...
. There he met Mary Cedarleaf in 1973, and they were married three years later in St. Paul, Minnesota. In 1976, Howard earned a master’s degree in business administration from the American University
American University
American University is a private, Methodist, liberal arts, and research university in Washington, D.C. The university was chartered by an Act of Congress on December 5, 1892 as "The American University", which was approved by President Benjamin Harrison on February 24, 1893...
in Washington, DC and joined USAID. In February 1977, the Howards left for two years in Lima
Lima
Lima is the capital and the largest city of Peru. It is located in the valleys of the Chillón, Rímac and Lurín rivers, in the central part of the country, on a desert coast overlooking the Pacific Ocean. Together with the seaport of Callao, it forms a contiguous urban area known as the Lima...
, Peru
Peru
Peru , officially the Republic of Peru , is a country in western South America. It is bordered on the north by Ecuador and Colombia, on the east by Brazil, on the southeast by Bolivia, on the south by Chile, and on the west by the Pacific Ocean....
, where he worked on loan projects. Although the CIA sometimes uses USAID as diplomatic cover, there is no evidence to suggest that Howard was anything but a loan officer. After Peru, the Howards returned to the United States, and he went to work in Chicago
Chicago
Chicago is the largest city in the US state of Illinois. With nearly 2.7 million residents, it is the most populous city in the Midwestern United States and the third most populous in the US, after New York City and Los Angeles...
for a company doing environmental work. On March 19, 1983, the Howards had a son and named him Lee Howard.

Howard was hired by the CIA in 1980 and was later joined by his wife, Mary, where they were both trained in intelligence and counter-intelligence
Counter-intelligence
Counterintelligence or counter-intelligence refers to efforts made by intelligence organizations to prevent hostile or enemy intelligence organizations from successfully gathering and collecting intelligence against them. National intelligence programs, and, by extension, the overall defenses of...
methods. Shortly after the end of their training and before going on their first assignment, a routine polygraph
Polygraph
A polygraph measures and records several physiological indices such as blood pressure, pulse, respiration, and skin conductivity while the subject is asked and answers a series of questions...
test indicated that he had lied about past drug use, and he was fired by the CIA in 1983 shortly before he was to report to the CIA’s station at the American embassy in Moscow
Moscow
Moscow is the capital, the most populous city, and the most populous federal subject of Russia. The city is a major political, economic, cultural, scientific, religious, financial, educational, and transportation centre of Russia and the continent...
.

Disgruntled over the perceived unfairness of having been dismissed over accusations of drug use, petty theft and deception, he began to abuse alcohol. He then began making mysterious phone calls to some former colleagues, both in Washington and in Moscow. In February 1984 after a drunken brawl he was arrested and charged with assault with a deadly weapon. The charges were later reduced to aggravated assault.

At some point Howard apparently began providing classified information to the KGB
KGB
The KGB was the commonly used acronym for the . It was the national security agency of the Soviet Union from 1954 until 1991, and was the premier internal security, intelligence, and secret police organization during that time.The State Security Agency of the Republic of Belarus currently uses the...
, possibly contacting KGB officers in Austria
Austria
Austria , officially the Republic of Austria , is a landlocked country of roughly 8.4 million people in Central Europe. It is bordered by the Czech Republic and Germany to the north, Slovakia and Hungary to the east, Slovenia and Italy to the south, and Switzerland and Liechtenstein to the...
in 1984 during a visit there.

In 1985, the CIA was being shaken by several security leaks that led to exposure of agents and assets
Asset (intelligence)
In intelligence, assets are persons within organizations or countries that are being spied upon who provide information for an outside spy.There are different categories of assets, including people...
. On August 1, 1985, after twenty-five years of service in the KGB, Vitaly Yurchenko
Vitaly Yurchenko
Vitaly Yurchenko is a former high-ranking KGB officer in the Soviet Union. In 1985, after 25 years of service in the KGB, he made a fake defection to the United States during an assignment in Rome. After providing the names of two U.S. intelligence officers who were KGB agents, Yurchenko slipped...
walked into the US Embassy in Rome
Rome
Rome is the capital of Italy and the country's largest and most populated city and comune, with over 2.7 million residents in . The city is located in the central-western portion of the Italian Peninsula, on the Tiber River within the Lazio region of Italy.Rome's history spans two and a half...
and defected to the United States
United States
The United States of America is a federal constitutional republic comprising fifty states and a federal district...
. In the following interrogations by the CIA, he accused Howard and another agent, Ronald Pelton
Ronald Pelton
Ronald William Pelton was an National Security Agency intelligence analyst who was convicted in 1986 of spying for and selling secrets to the Soviet Union. He reportedly has a photographic memory as he passed no documents to the Soviets...
, of working for the KGB. In November of that year, Yurchenko himself re-defected back to the USSR. It has been suggested that Yurchenko was acting as a re-doubled agent, seeking to fool the CIA with wrong leads to protect one of the USSR’s then most important CIA traitors, Aldrich Ames
Aldrich Ames
Aldrich Hazen Ames is a former Central Intelligence Agency counter-intelligence officer and analyst, who, in 1994, was convicted of spying for the Soviet Union and Russia...
.

The FBI began watching the Howards in Santa Fe, New Mexico
Santa Fe, New Mexico
Santa Fe is the capital of the U.S. state of New Mexico. It is the fourth-largest city in the state and is the seat of . Santa Fe had a population of 67,947 in the 2010 census...
. A warrant was secured to tap the Howards’ phone. On September 20, 1985, Howard walked up to a member of a surveillance team and indicated that he was ready to talk but wanted to get a lawyer first, and a meeting was scheduled for the following week. The following night, however, Howard disappeared.

As he and his wife Mary drove back from a dinner away from their home, Howard leapt from the car as Mary slowed to round a corner. He left a dummy made from stuffed clothes and an old wig stand in his seat to fool the pursuing agents, and fled to Albuquerque where he took a plane to New York
New York
New York is a state in the Northeastern region of the United States. It is the nation's third most populous state. New York is bordered by New Jersey and Pennsylvania to the south, and by Connecticut, Massachusetts and Vermont to the east...
. Once at home, Mary placed a call to a number she knew would reach an answering machine, and played a pre-recorded message from Edward to fool the wiretap and buy her husband more time. From New York Howard flew to Helsinki
Helsinki
Helsinki is the capital and largest city in Finland. It is in the region of Uusimaa, located in southern Finland, on the shore of the Gulf of Finland, an arm of the Baltic Sea. The population of the city of Helsinki is , making it by far the most populous municipality in Finland. Helsinki is...
, and there he walked into the Soviet embassy.

Howard maintained his innocence until his death. He only fled, he said, because he could see the agency had chosen him to fill Yurchenko’s profile and wanted a scapegoat. He insisted he’d refused to divulge anything of real importance in exchange for his Soviet protection.

For the last nine years of his life Howard provided information about himself to Robert Eringer
Robert Eringer
ROBERT ERINGERRobert Eringer was born October 5th, 1954 in Los Angeles, California. He is a published author of fiction and non-fiction. He is retired from investigative journalism as well as from undercover FBI counterintelligence work. He created and directed the Principality of Monaco’s first...
who was working undercover in Russia for the FBI Counterintelligence pretending to be a book publishing consultant and trying to lure Howard to capture.

In 1995 Howard’s memoirs, called Safe House, were published by National Press Books in which Howard indicated that he was prepared for a plea bargain
Plea bargain
A plea bargain is an agreement in a criminal case whereby the prosecutor offers the defendant the opportunity to plead guilty, usually to a lesser charge or to the original criminal charge with a recommendation of a lighter than the maximum sentence.A plea bargain allows criminal defendants to...
with the U.S.

Howard died on July 12, 2002 at his Russian dacha
Dacha
Dacha is a Russian word for seasonal or year-round second homes often located in the exurbs of Soviet and post-Soviet cities. Cottages or shacks serving as family's main or only home are not considered dachas, although many purpose-built dachas are recently being converted for year-round residence...
, reportedly from a broken neck after a fall in his home.