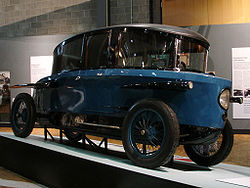 Edmund Rumpler was an Austria
Austria
Austria , officially the Republic of Austria , is a landlocked country of roughly 8.4 million people in Central Europe. It is bordered by the Czech Republic and Germany to the north, Slovakia and Hungary to the east, Slovenia and Italy to the south, and Switzerland and Liechtenstein to the...
n automobile and aircraft designer.

Born in Vienna
Vienna
Vienna is the capital and largest city of the Republic of Austria and one of the nine states of Austria. Vienna is Austria's primary city, with a population of about 1.723 million , and is by far the largest city in Austria, as well as its cultural, economic, and political centre...
, then Austro-Hungarian Empire (now Austria), he worked mainly in Germany. An automotive engineer by training, he collaborated with Hans Ledwinka
Hans Ledwinka
Hans Ledwinka was an Austrian automobile designer.- Youth :Ledwinka was born was born in Klosterneuburg , near Vienna, then part of the Austro-Hungarian Empire....
on the first Nesseldorf (later Tatra), the Präsident
Präsident
The Präsident was an automobile manufactured by Nesselsdorfer Wagenbau-Fabriks-Gesellschaft A.G. in 1897. Together with Lohner car, it was the first actually driveble factory made petrol-engined automobile produced in Austria-Hungary as well as in Central and Eastern Europe The Präsident was an...
, in 1897.

By age 30, in 1902, he had quit Daimler to become technical director of Adler
Adler (automobile)
Adler was a German automobile and motorcycle manufacturer from 1900 until 1957. Adler is German for eagle.-History:The Adler factory produced bicycles, typewriters, and motorcycles in addition to cars...
. He designed the first German engine to have engine and gearbox
Transmission (mechanics)
A machine consists of a power source and a power transmission system, which provides controlled application of the power. Merriam-Webster defines transmission as: an assembly of parts including the speed-changing gears and the propeller shaft by which the power is transmitted from an engine to a...
as a unit at Adler. The next year, he patent
Patent
A patent is a form of intellectual property. It consists of a set of exclusive rights granted by a sovereign state to an inventor or their assignee for a limited period of time in exchange for the public disclosure of an invention....
ed a swing axle
Swing axle
A swing axle is a simple type of independent suspension first used in early aircraft , such as the Sopwith and Fokker, usually with rubber bungee and no damping....
rear suspension
Suspension (vehicle)
Suspension is the term given to the system of springs, shock absorbers and linkages that connects a vehicle to its wheels. Suspension systems serve a dual purpose — contributing to the car's roadholding/handling and braking for good active safety and driving pleasure, and keeping vehicle occupants...
system (an idea later adopted by Ferdinand Porsche
Ferdinand Porsche
Ferdinand Porsche was an Austrian automotive engineer and honorary Doctor of Engineering. He is best known for creating the first hybrid vehicle , the Volkswagen Beetle, and the Mercedes-Benz SS/SSK, as well as the first of many Porsche automobiles...
for the KdF Wagen
Volkswagen Beetle
The Volkswagen Type 1, widely known as the Volkswagen Beetle or Volkswagen Bug, is an economy car produced by the German auto maker Volkswagen from 1938 until 2003...
and Porsche 911
Porsche 911
The Porsche 911 is a luxury 2-door sports coupe made by Porsche AG of Stuttgart, Germany. It has a distinctive design, rear-engined and with independent rear suspension, an evolution of the swing axle on the Porsche 356. The engine was also air-cooled until the introduction of the Type 996 in 1998...
, as well as by Chevrolet
Chevrolet
Chevrolet , also known as Chevy , is a brand of vehicle produced by General Motors Company . Founded by Louis Chevrolet and ousted GM founder William C. Durant on November 3, 1911, General Motors acquired Chevrolet in 1918...
for the Corvair
Chevrolet Corvair
-First generation :The 1960 Corvair 500 and 700 series four-door sedans were conceived as economy cars offering few amenities in order to keep the price competitive, with the 500 selling for under $2,000...
).

Rumpler continued to be interested in automobiles, and after the First World War, he applied aircraft streamlining
Aerodynamics
Aerodynamics is a branch of dynamics concerned with studying the motion of air, particularly when it interacts with a moving object. Aerodynamics is a subfield of fluid dynamics and gas dynamics, with much theory shared between them. Aerodynamics is often used synonymously with gas dynamics, with...
to a car, building the Tropfenwagen (German, "drop car") in Berlin
Berlin
Berlin is the capital city of Germany and is one of the 16 states of Germany. With a population of 3.45 million people, Berlin is Germany's largest city. It is the second most populous city proper and the seventh most populous urban area in the European Union...
. A production model proved a sensation at the 1921 Berlin Auto Show. Rumpler's efforts produced a car with an astoundingly low Cw
Drag coefficient
In fluid dynamics, the drag coefficient is a dimensionless quantity that is used to quantify the drag or resistance of an object in a fluid environment such as air or water. It is used in the drag equation, where a lower drag coefficient indicates the object will have less aerodynamic or...
of only 0.28 (when tested in 1979); the Fiat Balilla
Fiat 508
The 508 was a car introduced by Fiat in 1932. It effectively replaced the Fiat 509, although production of the earlier model had ceased back in 1929. It had a three-speed transmission , seated four, and had a top speed of about . It sold for 10,800 lire...
of the period, by contrast, was 0.60.

The Rumpler design inspired the 1923 Benz Tropfenwagen (which used the virtually-unchanged Rumpler chassis) and Auto Union
Auto Union racing car
The Auto Union Grand Prix racing cars types A to D, were developed and built by a specialist racing department of Horch works in Zwickau between 1933 and 1939....
(also built in part by Rumpler engineers) Grand Prix
Grand Prix motor racing
Grand Prix motor racing has its roots in organised automobile racing that began in France as far back as 1894. It quickly evolved from a simple road race from one town to the next, to endurance tests for car and driver...
racers.

Rumpler's Tropfenwagen was not a commercial success, and only 100 Tropfenwagen were built, just two of which survive. Rumpler returned to aircraft.

Because Rumpler was Jewish
Judaism
Judaism ) is the "religion, philosophy, and way of life" of the Jewish people...
, he was imprisoned after Adolf Hitler
Adolf Hitler
Adolf Hitler was an Austrian-born German politician and the leader of the National Socialist German Workers Party , commonly referred to as the Nazi Party). He was Chancellor of Germany from 1933 to 1945, and head of state from 1934 to 1945...
took power in 1933, and his career was ruined, even though he was soon released. He died in 1940, and the Nazis destroyed his records.