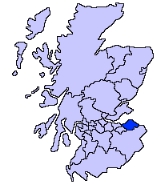 Encyclopedia
East Lothian is one of the 32 council areas of Scotland
Scotland
Scotland is a country that is part of the United Kingdom. Occupying the northern third of the island of Great Britain, it shares a border with England to the south and is bounded by the North Sea to the east, the Atlantic Ocean to the north and west, and the North Channel and Irish Sea to the...
, and a lieutenancy Area
Lieutenancy areas of Scotland
The lieutenancy areas of Scotland are the areas used for the ceremonial lord-lieutenants, the monarch's representatives, in Scotland. They are different from the local government council areas, the committee areas, the sheriffdoms, the registration counties, the former regions and districts, the...
. It borders the City of Edinburgh, Scottish Borders
Scottish Borders
The Scottish Borders is one of 32 local government council areas of Scotland. It is bordered by Dumfries and Galloway in the west, South Lanarkshire and West Lothian in the north west, City of Edinburgh, East Lothian, Midlothian to the north; and the non-metropolitan counties of Northumberland...
and Midlothian
Midlothian
Midlothian is one of the 32 council areas of Scotland, and a lieutenancy area. It borders the Scottish Borders, East Lothian and the City of Edinburgh council areas....
. Its administrative centre is Haddington
Haddington, East Lothian
The Royal Burgh of Haddington is a town in East Lothian, Scotland. It is the main administrative, cultural and geographical centre for East Lothian, which was known officially as Haddingtonshire before 1921. It lies about east of Edinburgh. The name Haddington is Anglo-Saxon, dating from the 6th...
, although its largest town is Musselburgh
Musselburgh
Musselburgh is the largest settlement in East Lothian, Scotland, on the coast of the Firth of Forth, six miles east of Edinburgh city centre.-History:...
.

East Lothian is served by two local paid-for weekly newspapers, the East Lothian Courier and the East Lothian News. The former, known locally as The Courier, is the better-selling and started in 1859 as the Haddingtonshire Courier (the name was changed in 1971). The family firm of D. & J. Croal, based in Haddington, owned and operated the paper until it was bought by the Dunfermline Press Group in 2004. The East Lothian News was first published in 1971, as part of Scottish County Press group, with editorial offices in Dalkeith
Dalkeith
Dalkeith is a town in Midlothian, Scotland, lying on the River North Esk. It was granted a burgh of barony in 1401 and a burgh of regality in 1540...
and printing at Bonnyrigg
Bonnyrigg
Bonnyrigg is a town in Midlothian, Scotland, eight miles southeast of Edinburgh city centre. The town had a population of 11,260 in the 1991 census which has risen to 14,457 according to the 2001 census. Along with Lasswade, Bonnyrigg is a twin town with Saint-Cyr-l'École, France.- History :Early...
(both in Midlothian
Midlothian
Midlothian is one of the 32 council areas of Scotland, and a lieutenancy area. It borders the Scottish Borders, East Lothian and the City of Edinburgh council areas....
). SCP was acquired by Regional Independent Media in 2000, which was in turn bought by Johnston Press
Johnston Press
Johnston Press plc is a newspaper publishing company headquartered in Edinburgh, Scotland. Its flagship titles are The Scotsman and the Yorkshire Post; it also operates many other newspapers around the United Kingdom, the Republic of Ireland and the Isle of Man. It is the second-largest publisher...
in 2002.