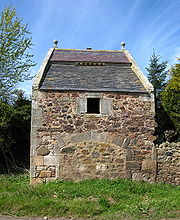 East Fortune is a village in East Lothian
East Lothian
East Lothian is one of the 32 council areas of Scotland, and a lieutenancy Area. It borders the City of Edinburgh, Scottish Borders and Midlothian. Its administrative centre is Haddington, although its largest town is Musselburgh....
, Scotland
Scotland
Scotland is a country that is part of the United Kingdom. Occupying the northern third of the island of Great Britain, it shares a border with England to the south and is bounded by the North Sea to the east, the Atlantic Ocean to the north and west, and the North Channel and Irish Sea to the...
, located 2 miles (3 km) north west of East Linton
East Linton
East Linton is a town in East Lothian, Scotland, situated on the River Tyne and A199 road five miles east of Haddington, with a population of 1,774...
. The area is known for its airfield which was constructed in 1915 to help protect Britain from attack by German Zeppelin
Zeppelin
A Zeppelin is a type of rigid airship pioneered by the German Count Ferdinand von Zeppelin in the early 20th century. It was based on designs he had outlined in 1874 and detailed in 1893. His plans were reviewed by committee in 1894 and patented in the United States on 14 March 1899...
airships during the First World War
World War I
World War I , which was predominantly called the World War or the Great War from its occurrence until 1939, and the First World War or World War I thereafter, was a major war centred in Europe that began on 28 July 1914 and lasted until 11 November 1918...
. The RNAS airship station also included an airship hangar
Airship hangar
Airships are sheltered in airship hangars during construction and sometimes also for regular operation, particularly at bad weather conditions. Rigid airships always needed to be based in airship hangars because weathering was a serious risk.- History :...
. In 1919 the British airship R34 made the first airship
Airship
An airship or dirigible is a type of aerostat or "lighter-than-air aircraft" that can be steered and propelled through the air using rudders and propellers or other thrust mechanisms...
crossing of the Atlantic
Atlantic Ocean
The Atlantic Ocean is the second-largest of the world's oceanic divisions. With a total area of about , it covers approximately 20% of the Earth's surface and about 26% of its water surface area...
, flying from East Fortune to Mineola, New York
Mineola, New York
Mineola is a village in Nassau County, New York, USA. The population was 18,799 at the 2010 census. The name is derived from a Native American word meaning a "pleasant place"....
http://heritage.scotsman.com/ingenuity.cfm?id=430902005.

In 1922, several buildings and an area of land were used to create East Fortune Hospital. This served as a tuberculosis
Tuberculosis
Tuberculosis, MTB, or TB is a common, and in many cases lethal, infectious disease caused by various strains of mycobacteria, usually Mycobacterium tuberculosis. Tuberculosis usually attacks the lungs but can also affect other parts of the body...
sanatorium for the south east region of Scotland until the onset of World War II
World War II
World War II, or the Second World War , was a global conflict lasting from 1939 to 1945, involving most of the world's nations—including all of the great powers—eventually forming two opposing military alliances: the Allies and the Axis...
. The airfield was then brought back into service as RAF East Fortune
RAF East Fortune
RAF East Fortune is a former RAF station, just south of the village of East Fortune in East Lothian, Scotland. The motto of the station was "Fortune Favours the Bold"....
, initially a training base, and the hospital patients were transferred to Bangour Hospital in West Lothian
West Lothian
West Lothian is one of the 32 unitary council areas in Scotland, and a Lieutenancy area. It borders the City of Edinburgh, Falkirk, North Lanarkshire, the Scottish Borders and South Lanarkshire....
. The hospital re-opened after the war, but by 1956, as the number of tuberculosis patients began to fall, the hospital changed its function to house the mentally handicapped. In 1997, the hospital closed down, and its patients were transferred to Roodlands Hospital in Haddington
Haddington, East Lothian
The Royal Burgh of Haddington is a town in East Lothian, Scotland. It is the main administrative, cultural and geographical centre for East Lothian, which was known officially as Haddingtonshire before 1921. It lies about east of Edinburgh. The name Haddington is Anglo-Saxon, dating from the 6th...
.

For a short period in 1961, East Fortune operated as Edinburgh
Edinburgh
Edinburgh is the capital city of Scotland, the second largest city in Scotland, and the eighth most populous in the United Kingdom. The City of Edinburgh Council governs one of Scotland's 32 local government council areas. The council area includes urban Edinburgh and a rural area...
's airport while facilities at Turnhouse
Edinburgh Airport
Edinburgh Airport is located at Turnhouse in the City of Edinburgh, Scotland, and was the busiest airport in Scotland in 2010, handling just under 8.6 million passengers in that year. It was also the sixth busiest airport in the UK by passengers and the fifth busiest by aircraft movements...
were being reconstructed.

In 1975, the National Museum of Flight was opened at the airfield, and has since become a popular tourist attraction. It is also home to a Concorde
Concorde
Aérospatiale-BAC Concorde was a turbojet-powered supersonic passenger airliner, a supersonic transport . It was a product of an Anglo-French government treaty, combining the manufacturing efforts of Aérospatiale and the British Aircraft Corporation...
, G-BOAA from the decommissioned British Airways
British Airways
British Airways is the flag carrier airline of the United Kingdom, based in Waterside, near its main hub at London Heathrow Airport. British Airways is the largest airline in the UK based on fleet size, international flights and international destinations...
fleet, which forms the centrepiece of a major exhibition about the Concorde programme.

At the eastern side of the airfield the old runways and link roads of East Fortune airfield are now used as a motorcycle race track run by the Melville Motorcycle Club. There are around 7 race weekends every year with racing on both Saturdays and Sundays, continually attracting over 200 competitors over the several classes available. Riders travel from the local area, Northumberland and as far as Ireland on occasions for most weekends. Melville Motorcycle Club run the track on a not-for-profit basis and have reinvested heavily in resurfacing and upgrading facilities.

At the western side of the airfield East of Scotland Microlights operate from the extension to the main runway that was laid in 1961 when the airfield was used as Edinburgh's Airport.

An annual airshow
Airshow
An air show is an event at which aviators display their flying skills and the capabilities of their aircraft to spectators in aerobatics. Air shows without aerobatic displays, having only aircraft displayed parked on the ground, are called "static air shows"....
is held, normally in July, however no aircraft are able to land during the airshow due to the runways being in an unfit state for aircraft operations.
The source of this article is wikipedia, the free encyclopedia.  The text of this article is licensed under the GFDL.