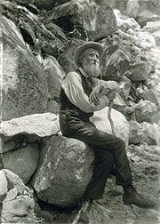 Overview
John Muir was a Scottish-born American naturalist
Naturalist
Naturalist may refer to:* Practitioner of natural history* Conservationist* Advocate of naturalism * Naturalist , autobiography-See also:* The American Naturalist, periodical* Naturalism...
, author, and early advocate of preservation of wilderness
Wilderness
Wilderness or wildland is a natural environment on Earth that has not been significantly modified by human activity. It may also be defined as: "The most intact, undisturbed wild natural areas left on our planet—those last truly wild places that humans do not control and have not developed with...
in the United States. His letters, essays, and books telling of his adventures in nature, especially in the Sierra Nevada mountains of California, have been read by millions. His activism helped to save the Yosemite Valley
Yosemite Valley
Yosemite Valley is a glacial valley in Yosemite National Park in the western Sierra Nevada mountains of California, carved out by the Merced River. The valley is about long and up to a mile deep, surrounded by high granite summits such as Half Dome and El Capitan, and densely forested with pines...
, Sequoia National Park
Sequoia National Park
Sequoia National Park is a national park in the southern Sierra Nevada east of Visalia, California, in the United States. It was established on September 25, 1890. The park spans . Encompassing a vertical relief of nearly , the park contains among its natural resources the highest point in the...
and other wilderness areas. The Sierra Club
Sierra Club
The Sierra Club is the oldest, largest, and most influential grassroots environmental organization in the United States. It was founded on May 28, 1892, in San Francisco, California, by the conservationist and preservationist John Muir, who became its first president...
, which he founded, is now one of the most important conservation organizations in the United States.

Why didn't John Muir get a college degree?
More

I used to envy the father of our race, dwelling as he did in contact with the new-made fields and plants of Eden; but I do so no more, because I have discovered that I also live in "creation's dawn." The morning stars still sing together, and the world, not yet half made, becomes more beautiful every day.

"The water in music the oar forsakes." The air in music the wing forsakes. All things in move in music and write it. The mouse, lizard, and grasshopper sing together on the Turlock sands, sing with the morning stars.

In God's wildness lies the hope of the world—the great fresh unblighted, unredeemed wilderness. The galling harness of civilization drops off, and wounds heal ere we are aware.

Only by going alone in silence, without baggage, can one truly get into the heart of the wilderness. All other travel is mere dust and hotels and baggage and chatter.

Few are altogether deaf to the preaching of pine trees. Their sermons on the mountains go to our hearts; and if people in general could be got into the woods, even for once, to hear the trees speak for themselves, all difficulties in the way of forest preservation would vanish.

None of Nature's landscapes are ugly so long as they are wild.

When we try to pick out anything by itself, we find it hitched to everything else in the Universe.

Variant: When one tugs at a single thing in nature, he finds it attached to the rest of the world.
More
x