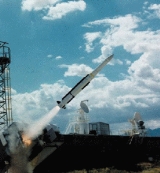 Encyclopedia
The RIM-162 Evolved Sea Sparrow Missile (ESSM) is a development of the RIM-7 Sea Sparrow
RIM-7 Sea Sparrow
RIM-7 Sea Sparrow is a US ship-borne short-range anti-aircraft and anti-missile weapon system, primarily intended for defense against anti-ship missiles...
missile
Missile
Though a missile may be any thrown or launched object, it colloquially almost always refers to a self-propelled guided weapon system.-Etymology:The word missile comes from the Latin verb mittere, meaning "to send"...
used to protect ships from attacking missiles and aircraft. ESSM is designed to counter supersonic
Supersonic
Supersonic speed is a rate of travel of an object that exceeds the speed of sound . For objects traveling in dry air of a temperature of 20 °C this speed is approximately 343 m/s, 1,125 ft/s, 768 mph or 1,235 km/h. Speeds greater than five times the speed of sound are often...
maneuvering anti-ship missile
Anti-ship missile
Anti-ship missiles are guided missiles that are designed for use against ships and large boats. Most anti-ship missiles are of the sea-skimming type, many use a combination of inertial guidance and radar homing...
s. Compared to the Sea Sparrow, ESSM has a larger, more powerful rocket motor for increased range and agility, as well as upgraded aerodynamics
Aerodynamics
Aerodynamics is a branch of dynamics concerned with studying the motion of air, particularly when it interacts with a moving object. Aerodynamics is a subfield of fluid dynamics and gas dynamics, with much theory shared between them. Aerodynamics is often used synonymously with gas dynamics, with...
using strakes
Strake (aviation)
In aviation, a strake is an aerodynamic surface generally mounted on the fuselage of an aircraft to improve the airflow and hence the flight characteristics.In general a strake is longer than it is wide, in contrast to a winglet or a moustache....
and skid-to-turn
Skid-to-turn
Skid-to-turn is an aeronautical vehicle reference for how such a vehicle may be turned. It applies to vehicles such as aircraft and missiles. In skid-to-turn, the vehicle does not roll to a preferred angle. Instead commands to the control surfaces are mixed to produce the maneuver in the desired...
. In addition, ESSM takes advantage of the latest missile guidance
Missile guidance
Missile guidance refers to a variety of methods of guiding a missile or a guided bomb to its intended target. The missile's target accuracy is a critical factor for its effectiveness...
technology, with different versions for Aegis
Aegis combat system
The Aegis Combat System is an integrated naval weapons system developed by the Missile and Surface Radar Division of RCA, and now produced by Lockheed Martin...
/SPY-1, Sewaco/APAR
Active Phased Array Radar
APAR is a shipborne multifunction radar developed and manufactured by Thales Nederland. It is the first Active Electronically Scanned Array MFR employed on an operational warship.-Characteristics:...
, and traditional target illumination all-the-way. ESSM also has the ability to be "quad-packed" in the Mk 41 VLS
Vertical Launching System
A vertical launching system is a system for holding and firing missiles on surface ships and submarines used by many navies around the world. Each VLS system consists of a number of cells, which can hold one or more missiles ready for firing...
system, allowing up to four ESSMs to be carried in a single cell.

Many countries are using or plan to use the ESSM. The first countries to achieve operational status for ESSM were the United States
United States
The United States of America is a federal constitutional republic comprising fifty states and a federal district...
and Australia
Australia
Australia , officially the Commonwealth of Australia, is a country in the Southern Hemisphere comprising the mainland of the Australian continent, the island of Tasmania, and numerous smaller islands in the Indian and Pacific Oceans. It is the world's sixth-largest country by total area...
. Canada
Canada
Canada is a North American country consisting of ten provinces and three territories. Located in the northern part of the continent, it extends from the Atlantic Ocean in the east to the Pacific Ocean in the west, and northward into the Arctic Ocean...
, Germany
Germany
Germany , officially the Federal Republic of Germany , is a federal parliamentary republic in Europe. The country consists of 16 states while the capital and largest city is Berlin. Germany covers an area of 357,021 km2 and has a largely temperate seasonal climate...
, Turkey
Turkey
Turkey , known officially as the Republic of Turkey , is a Eurasian country located in Western Asia and in East Thrace in Southeastern Europe...
, Greece
Greece
Greece , officially the Hellenic Republic , and historically Hellas or the Republic of Greece in English, is a country in southeastern Europe....
, Japan
Japan
Japan is an island nation in East Asia. Located in the Pacific Ocean, it lies to the east of the Sea of Japan, China, North Korea, South Korea and Russia, stretching from the Sea of Okhotsk in the north to the East China Sea and Taiwan in the south...
, Denmark
Denmark
Denmark is a Scandinavian country in Northern Europe. The countries of Denmark and Greenland, as well as the Faroe Islands, constitute the Kingdom of Denmark . It is the southernmost of the Nordic countries, southwest of Sweden and south of Norway, and bordered to the south by Germany. Denmark...
, the Netherlands
Netherlands
The Netherlands is a constituent country of the Kingdom of the Netherlands, located mainly in North-West Europe and with several islands in the Caribbean. Mainland Netherlands borders the North Sea to the north and west, Belgium to the south, and Germany to the east, and shares maritime borders...
, Norway
Norway
Norway , officially the Kingdom of Norway, is a Nordic unitary constitutional monarchy whose territory comprises the western portion of the Scandinavian Peninsula, Jan Mayen, and the Arctic archipelago of Svalbard and Bouvet Island. Norway has a total area of and a population of about 4.9 million...
, New Zealand
New Zealand
New Zealand is an island country in the south-western Pacific Ocean comprising two main landmasses and numerous smaller islands. The country is situated some east of Australia across the Tasman Sea, and roughly south of the Pacific island nations of New Caledonia, Fiji, and Tonga...
, Spain
Spain
Spain , officially the Kingdom of Spain languages]] under the European Charter for Regional or Minority Languages. In each of these, Spain's official name is as follows:;;;;;;), is a country and member state of the European Union located in southwestern Europe on the Iberian Peninsula...
, and the United Arab Emirates have also integrated or are in the process of integrating the ESSM.

In addition to the Mk 41 VLS
Vertical Launching System
A vertical launching system is a system for holding and firing missiles on surface ships and submarines used by many navies around the world. Each VLS system consists of a number of cells, which can hold one or more missiles ready for firing...
system, the other primary launcher is Mk 48 VLS. The 2-cell module of Mk-48 makes the system very versatile and enables it to be installed onboard in spaces that otherwise cannot be utilized. The weight of a 2-cell module of Mk-48 is 1,450 pounds (with empty canisters), 725 pounds for exhaust system, and 800 pounds for ship installation interfaces. Each canister of the Mk-48 VLS houses a single RIM-162 ESSM though, with modification, other missiles can also be launched.

US operational evaluation was conducted in July 2002
2002 in aviation
This is a list of aviation-related events from 2002:- Events :A depression in North American commercial aviation begins in the aftermath of economic recession and the September 11 attacks.-January:...
aboard . Initial operational capability did not occur until later.

In October 2003, at the USN Pacific Missile Range Facility near Hawaii, Australian frigate conducted a successful firing of an ESSM. The firing was also the first operational use of the CEA Technologies CWI for guidance.
In November 2003, approximately 200 nautical miles (370.4 km) from the Azores
Azores
The Archipelago of the Azores is composed of nine volcanic islands situated in the middle of the North Atlantic Ocean, and is located about west from Lisbon and about east from the east coast of North America. The islands, and their economic exclusion zone, form the Autonomous Region of the...
, the Royal Netherlands Navy
Royal Netherlands Navy
The Koninklijke Marine is the navy of the Netherlands. In the mid-17th century the Dutch Navy was the most powerful navy in the world and it played an active role in the wars of the Dutch Republic and later those of the Batavian Republic and the Kingdom of the Netherlands...
(RNLN) frigate HNLMS De Zeven Provinciën
HNLMS De Zeven Provinciën (F802)
HNLMS De Zeven Provinciën is the first ship of the De Zeven Provinciën class air defence and command frigates in service with the Royal Netherlands Navy...
conducted a live fire test of a single ESSM. This firing was the first ever live firing involving a full-size ship-borne Active Electronically Scanned Array
Active Electronically Scanned Array
An Active Electronically Scanned Array , also known as active phased array radar is a type of phased array radar whose transmitter and receiver functions are composed of numerous small solid-state transmit/receive modules . AESAs aim their "beam" by broadcasting radio energy that interfere...
(i.e. the APAR
Active Phased Array Radar
APAR is a shipborne multifunction radar developed and manufactured by Thales Nederland. It is the first Active Electronically Scanned Array MFR employed on an operational warship.-Characteristics:...
radar) guiding a missile using the Interrupted Continuous Wave Illumination (ICWI) technique in an operational environment. As related by Jane's Navy International:

During the tracking and missile-firing tests, target profiles were provided by Greek-built EADS/3Sigma Iris PVK medium-range subsonic target drones. [...] According to the RNLN, ... "APAR
Active Phased Array Radar
APAR is a shipborne multifunction radar developed and manufactured by Thales Nederland. It is the first Active Electronically Scanned Array MFR employed on an operational warship.-Characteristics:...
immediately acquired the missile and maintained track until destruction". [...] These ground-breaking tests represented the world's first live verification of the ICWI technique.

In August 2004 a German Navy
German Navy
The German Navy is the navy of Germany and is part of the unified Bundeswehr .The German Navy traces its roots back to the Imperial Fleet of the revolutionary era of 1848 – 52 and more directly to the Prussian Navy, which later evolved into the Northern German Federal Navy...
Sachsen class
Sachsen class frigate
The F124 Sachsen class is Germany's latest class of highly advanced air-defense frigates. The design of the Sachsen class frigate is based on that of the F123 Brandenburg class but with enhanced stealth features intended to deceive any opponent's radar and acoustic sensors and incorporate also the...
frigate completed a series of live missile firings at the Point Mugu missile launch range off the coast of California that included a total of 11 ESSM missile firings. The tests included firings against target drones such as the Northrup Grumman BQM-74E Chukkar III and Teledyne Ryan BQM-34S Firebee I, as well as against missile targets such as the Beech AQM-37C and air-launched Kormoran 1 anti-ship missiles.

All ESSM launches from De Zeven Provinciën class
De Zeven Provinciën class frigate
The De Zeven Provinciën class frigates are highly advanced air-defence and command frigates in service with the Koninklijke Marine . This class of ships is also known as LCF...
frigates and Sachsen class
Sachsen class frigate
The F124 Sachsen class is Germany's latest class of highly advanced air-defense frigates. The design of the Sachsen class frigate is based on that of the F123 Brandenburg class but with enhanced stealth features intended to deceive any opponent's radar and acoustic sensors and incorporate also the...
frigates involved ESSMs quad-packed in a Mark 41 vertical launch system
Mark 41 Vertical Launch System
The Mark 41 Vertical Launch System is a shipborne missle canister launching system which provides a rapid-fire launch capability against hostile threats. The Vertical Launch System concept was derived from work on the Aegis Combat System. Refinement of the concept continued through the 1960s and...
.

The first "kill" by the RIM-162D from a United States Navy carrier's Mk 29 launcher was achieved during a training exercise by the on 7 October 2008.