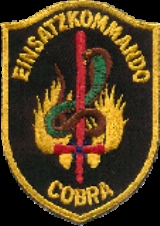 Encyclopedia
EKO Cobra is Austria
Austria
Austria , officially the Republic of Austria , is a landlocked country of roughly 8.4 million people in Central Europe. It is bordered by the Czech Republic and Germany to the north, Slovakia and Hungary to the east, Slovenia and Italy to the south, and Switzerland and Liechtenstein to the...
's foremost counter-terrorism
Counter-terrorism
Counter-terrorism is the practices, tactics, techniques, and strategies that governments, militaries, police departments and corporations adopt to prevent or in response to terrorist threats and/or acts, both real and imputed.The tactic of terrorism is available to insurgents and governments...
special operations
Special forces
Special forces, or special operations forces are terms used to describe elite military tactical teams trained to perform high-risk dangerous missions that conventional units cannot perform...
tactical unit. It is not part of the Austrian Federal Police but is directly under the control of the Austrian Federal Ministry for the Interior
Federal Ministry for the Interior (Austria)
The Federal Ministry for the Interior is a ministry of the Austrian federal government.It has offices in the Palais Modena. The current head of the ministry is minister Johanna Mikl-Leitner....
.

The Einsatzkommando Cobra, formerly known as GEK (Gendarmerieeinsatzkommando) was formed in 1978, primarily as a response to the attack on Israel
Israel
The State of Israel is a parliamentary republic located in the Middle East, along the eastern shore of the Mediterranean Sea...
i athletes at the 1972 Munich Olympics. Its main office is in Wiener Neustadt
Wiener Neustadt
-Main sights:* The Late-Romanesque Dom, consecrated in 1279 and cathedral from 1469 to 1785. The choir and transept, in Gothic style, are from the 14th century. In the late 15th century 12 statues of the Apostles were added in the apse, while the bust of Cardinal Melchior Klesl is attributed to...
, with sub-offices in Graz
Graz
The more recent population figures do not give the whole picture as only people with principal residence status are counted and people with secondary residence status are not. Most of the people with secondary residence status in Graz are students...
and Linz
Linz
Linz is the third-largest city of Austria and capital of the state of Upper Austria . It is located in the north centre of Austria, approximately south of the Czech border, on both sides of the river Danube. The population of the city is , and that of the Greater Linz conurbation is about...
and Innsbruck
Innsbruck
- Main sights :- Buildings :*Golden Roof*Kaiserliche Hofburg *Hofkirche with the cenotaph of Maximilian I, Holy Roman Emperor*Altes Landhaus...
.

The Federal Ministry of Interior changed the unit's name from GEK to EKO Cobra in 2002.

The 450 men (1 woman) of EKO Cobra are a well trained counter-terrorist
Counter-terrorism
Counter-terrorism is the practices, tactics, techniques, and strategies that governments, militaries, police departments and corporations adopt to prevent or in response to terrorist threats and/or acts, both real and imputed.The tactic of terrorism is available to insurgents and governments...
commando unit and have trained with some of the most elite special forces units.

The EKO Cobra was involved in a hostage rescue in the Graz-Karlau Prison
Graz-Karlau Prison
Graz-Karlau Prison is located in the city of Graz in the Austrian state of Styria. With a capacity of 552 inmates, Graz-Karlau is the third largest prison in Austria.-History:...
in 1996 and numerous other operations. Although it has never participated in the same type of hostage rescues that GIGN, GIS
Gruppo di Intervento Speciale
Gruppo di Intervento Speciale is an elite Special Operations counter-terrorism tactical response unit inside the Italian Carabinieri military police, first formed in 1978...
, GSG 9
GSG 9
The GSG 9 der Bundespolizei , is the elite counter-terrorism and special operations unit of the German Federal Police.-History and name:...
and the SAS
Special Air Service
Special Air Service or SAS is a corps of the British Army constituted on 31 May 1950. They are part of the United Kingdom Special Forces and have served as a model for the special forces of many other countries all over the world...
have , the EKO Cobra is the only Counter-Terrorism unit to end a hijacking while the plane was still in the air: On 17 October 1996, 4 Cobra officers were on board an Aeroflot
Aeroflot
OJSC AeroflotRussian Airlines , commonly known as Aeroflot , is the flag carrier and largest airline of the Russian Federation, based on passengers carried per year...
Tupolev Tu-154
Tupolev Tu-154
The Tupolev Tu-154 is a three-engine medium-range narrow-body airliner designed in the mid 1960s and manufactured by Tupolev. As the mainstay 'workhorse' of Soviet and Russian airlines for several decades, it serviced over a sixth of the world's landmass and carried half of all passengers flown...
escorting deported prisoners to Lagos
Lagos
Lagos is a port and the most populous conurbation in Nigeria. With a population of 7,937,932, it is currently the third most populous city in Africa after Cairo and Kinshasa, and currently estimated to be the second fastest growing city in Africa...
when a Nigerian man threatened the cockpit crew with a knife and demanded a diversion to Germany
Germany
Germany , officially the Federal Republic of Germany , is a federal parliamentary republic in Europe. The country consists of 16 states while the capital and largest city is Berlin. Germany covers an area of 357,021 km2 and has a largely temperate seasonal climate...
or South Africa
South Africa
The Republic of South Africa is a country in southern Africa. Located at the southern tip of Africa, it is divided into nine provinces, with of coastline on the Atlantic and Indian oceans...
. The team overpowered the man and handed him over to the authorities after landing. The officers received a decoration by Russian prime minister Putin.

Any member of the Austrian Federal Police may apply for the EKO Cobra.
The tests consist of medical examinations, psychological tests and vigorous physical tests.
Upon successful completion of the tests the recruits attend 6 months of specialized training which includes marksmanship, tactical training, sports, driver courses, abseiling/rappelling, hand-to-hand combat, language classes, etc.
Besides the courses taught in the basic training, further specialization is possible in fields, such as parachuting, diving, explosives or sniping.
.

The units headquarter is located in Wiener Neustadt
Wiener Neustadt
-Main sights:* The Late-Romanesque Dom, consecrated in 1279 and cathedral from 1469 to 1785. The choir and transept, in Gothic style, are from the 14th century. In the late 15th century 12 statues of the Apostles were added in the apse, while the bust of Cardinal Melchior Klesl is attributed to...
(Lower Austria
Lower Austria
Lower Austria is the northeasternmost state of the nine states in Austria. The capital of Lower Austria since 1986 is Sankt Pölten, the most recently designated capital town in Austria. The capital of Lower Austria had formerly been Vienna, even though Vienna is not officially part of Lower Austria...
). It performs all administrative activities as well as the training for the EKO Cobra officers.
Further departments exist in Vienna, Graz, Linz and Innsbruck as well as small field offices in Klagenfurt, Salzburg and Feldkirch.
Each department contains four teams while each field office contains two. This structure allows the units to be deployed anywhere in Austria in less than 70 minutes.

EKO Cobra is armed mainly with Austria
Austria
Austria , officially the Republic of Austria , is a landlocked country of roughly 8.4 million people in Central Europe. It is bordered by the Czech Republic and Germany to the north, Slovakia and Hungary to the east, Slovenia and Italy to the south, and Switzerland and Liechtenstein to the...
n-produced weaponry. For example, in line with other Austrian executive bodies, they are equipped with the Steyr AUG
Steyr AUG
The AUG is an Austrian bullpup 5.56mm assault rifle, designed in the early 1970s by Steyr Mannlicher GmbH & Co KG . The AUG was adopted by the Austrian Army as the StG 77 in 1977, where it replaced the 7.62mm StG 58 automatic rifle...
(military designation: StG 77) assault rifle
Assault rifle
An assault rifle is a selective fire rifle that uses an intermediate cartridge and a detachable magazine. Assault rifles are the standard infantry weapons in most modern armies...
and the Glock 17
Glock pistol
The Glock pistol, sometimes referred to by the manufacturer as Glock "Safe Action" Pistol, is a series of semi-automatic pistols designed and produced by Glock Ges.m.b.H., located in Deutsch-Wagram, Austria. The company's founder, engineer Gaston Glock, had no experience with firearm design or...
semi-automatic 9x19mm Parabellum pistol. Their sniper
Sniper
A sniper is a marksman who shoots targets from concealed positions or distances exceeding the capabilities of regular personnel. Snipers typically have specialized training and distinct high-precision rifles....
rifle of choice is the Steyr SSG 69
Steyr SSG 69
The SSG 69 is a bolt-action sniper rifle produced by Steyr Mannlicher and serves as the standard sniper rifle for the Austrian Army....
(SD).

Depending on the situation, they also use the 9mm Steyr TMP
Steyr TMP
The Steyr TMP is a select-fire 9x19mm Parabellum caliber machine pistol manufactured by Steyr Mannlicher of Austria. The Magazines come in 15, 20, or 30 round detachable box types. A suppressor can also be fitted...
machine pistol (another Austrian weapon), the Franchi SPAS-12
Franchi SPAS-12
The SPAS-12 is a combat shotgun that was manufactured by the Italian firearms company Franchi S.p.A. from 1979 to 2000. The SPAS-12 is a dual-mode shotgun, meaning it can be calibrated to cycle either semi-automatically or through pump-action. The SPAS-12 has sold well to military and police users...
, the Heckler & Koch M512 shotgun, the Remington 870
Remington 870
The Remington Model 870 is a U.S.-made pump-action shotgun manufactured by Remington Arms Company, Inc. It is widely used by the public for sport shooting, hunting, and self-defense. It is also commonly used by law enforcement and military organizations worldwide.-Development:The Remington 870 was...
, the MP5A3, the Heckler & Koch MP7
Heckler & Koch MP7
The MP7 is a German submachine gun manufactured by Heckler & Koch and chambered for the 4.6×30mm cartridge. It was designed with the new cartridge to meet NATO requirements published in 1989, as these requirements call for a personal defense weapon class firearm, with a greater ability to defeat...
, the Glock 18 machine pistol or the MZP-1
Heckler & Koch HK69A1
The HK69A1 is a 40 mm grenade launcher developed and produced by the German arms manufacturer Heckler & Koch . The weapon was designed to engage enemy troops and strongpoints out to a distance of 350 m; it can also be used to deploy smoke grenades and illumination flares.-Development:The launcher’s...
40 mm grenade launcher
Grenade launcher
A grenade launcher or grenade discharger is a weapon that launches a grenade with more accuracy, higher velocity, and to greater distances than a soldier could throw it by hand....
.

EKO Cobra officers wear the uniform of the Austrian Federal Police with certain distinctions:
During tactical operations the officers wear grey or black coveralls along with their tactical gear.

Austria
Austria
Austria , officially the Republic of Austria , is a landlocked country of roughly 8.4 million people in Central Europe. It is bordered by the Czech Republic and Germany to the north, Slovakia and Hungary to the east, Slovenia and Italy to the south, and Switzerland and Liechtenstein to the...
's capital city, Vienna
Vienna
Vienna is the capital and largest city of the Republic of Austria and one of the nine states of Austria. Vienna is Austria's primary city, with a population of about 1.723 million , and is by far the largest city in Austria, as well as its cultural, economic, and political centre...
, has its own counter-terrorist SWAT team, called WEGA (Wiener Einsatzgruppe Alarmabteilung; in English: Viennese Special Task Force Alarm Section) which is equally trained and capable of handling serious situations such as hostage taking.