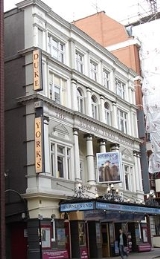 Encyclopedia
The Duke of York's Theatre is a West End Theatre
West End theatre
West End theatre is a popular term for mainstream professional theatre staged in the large theatres of London's 'Theatreland', the West End. Along with New York's Broadway theatre, West End theatre is usually considered to represent the highest level of commercial theatre in the English speaking...
in St Martin's Lane, in the City of Westminster
City of Westminster
The City of Westminster is a London borough occupying much of the central area of London, England, including most of the West End. It is located to the west of and adjoining the ancient City of London, directly to the east of the Royal Borough of Kensington and Chelsea, and its southern boundary...
. It was built for Frank Wyatt
Frank Wyatt (singer)
Frank Wyatt was an English actor, singer, theatre manager and playwright.In a two-decade career on stage, Wyatt is best remembered for his roles with the D'Oyly Carte Opera Company from 1889 to 1891, and in particular for creating the role of the Duke of Plaza-Toro in Gilbert and Sullivan's hit...
and his wife, Violet Melnotte, who retained ownership of the theatre, until her death in 1935. It opened on 10 September 1892 as the Trafalgar Square Theatre, with Wedding Eve. The theatre, designed by architect Walter Emden
Walter Emden
Walter Lawrence Emden was one of the leading English theatre and music hall architects in the building boom of 1885 to 1915.-Biography:...
became known as the Trafalgar Theatre in 1894 and the following year became the Duke of York's to honour the future King George V
George V of the United Kingdom
George V was King of the United Kingdom and the British Dominions, and Emperor of India, from 6 May 1910 through the First World War until his death in 1936....
.

One of the earliest musical comedies
Edwardian Musical Comedy
Edwardian musical comedies were British musical theatre shows from the period between the early 1890s, when the Gilbert and Sullivan operas' dominance had ended, until the rise of the American musicals by Jerome Kern, Rodgers and Hart, George Gershwin and Cole Porter following World War I.Between...
, Go-Bang
Go-Bang
Go-Bang is an English musical comedy with words by Adrian Ross and music by F. Osmond Carr.The piece was produced by Fred Harris and opened at the Trafalgar Square Theatre on 10 March 1894. It ran for 159 performances. The show starred Harry Grattan, George Grossmith, Jr., Arthur Playfair,...
, was a success at the theatre in 1894. In 1900, Jerome K. Jerome
Jerome K. Jerome
Jerome Klapka Jerome was an English writer and humorist, best known for the humorous travelogue Three Men in a Boat.Jerome was born in Caldmore, Walsall, England, and was brought up in poverty in London...
's Miss Hobbs was staged as well as David Belasco
David Belasco
David Belasco was an American theatrical producer, impresario, director and playwright.-Biography:Born in San Francisco, California, where his Sephardic Jewish parents had moved from London, England, during the Gold Rush, he began working in a San Francisco theatre doing a variety of routine jobs,...
's Madame Butterfly, which was seen by Puccini
Giacomo Puccini
Giacomo Antonio Domenico Michele Secondo Maria Puccini was an Italian composer whose operas, including La bohème, Tosca, Madama Butterfly, and Turandot, are among the most frequently performed in the standard repertoire...
, who later turned it into the famous opera. This was also the theatre where J. M. Barrie
J. M. Barrie
Sir James Matthew Barrie, 1st Baronet, OM was a Scottish author and dramatist, best remembered today as the creator of Peter Pan. The child of a family of small-town weavers, he was educated in Scotland. He moved to London, where he developed a career as a novelist and playwright...
's Peter Pan, or The Boy Who Wouldn't Grow Up debuted on 27 December 1904. Many famous British actors have appeared here, including Basil Rathbone
Basil Rathbone
Sir Basil Rathbone, KBE, MC, Kt was an English actor. He rose to prominence in England as a Shakespearean stage actor and went on to appear in over 70 films, primarily costume dramas, swashbucklers, and, occasionally, horror films...
, who played Alfred de Musset in Madame Sand in June 1920, returning in November 1932 as the Unknown Gentleman in Tonight or Never.

The theatre was Grade II listed by English Heritage
English Heritage
English Heritage . is an executive non-departmental public body of the British Government sponsored by the Department for Culture, Media and Sport...
in September 1960. In the late 1970s the freehold of the theatre was purchased by Capital Radio
Capital Radio
Capital London is a London based radio station which launched on 16 October 1973 and is owned by Global Radio. On 3 January 2011 it formed part of the nine station Capital radio network.- Pre-launch :...
and it closed in 1979 for refurbishment. It reopened in February 1980 and the first production under the patronage of Capital Radio was Rose, starring Glenda Jackson
Glenda Jackson
Glenda May Jackson, CBE is a British Labour Party politician and former actress. She has been a Member of Parliament since 1992, and currently represents Hampstead and Kilburn. She previously served as MP for Hampstead and Highgate...
. The Ambassador Theatre Group bought the theatre in 1992 and this coincided with London's hottest show, The Royal Court's production of Ariel Dorfman
Ariel Dorfman
Vladimiro Ariel Dorfman is an Argentine-Chilean novelist, playwright, essayist, academic, and human rights activist. A citizen of the United States since 2004, he has been a professor of literature and Latin American Studies at Duke University, in Durham, North Carolina since 1985.-Personal...
's Death and the Maiden
Death and the Maiden (play)
Death and the Maiden is a 1990 play by Chilean playwright Ariel Dorfman. The world premiere was staged at the Royal Court Theatre in London on 9 July 1991, directed by Lindsay Posner...
. A host of successes followed including Richard O'Brien's The Rocky Horror Show
The Rocky Horror Show
The Rocky Horror Show is a long-running British horror comedy stage musical, which opened in London on 19 June 1973. It was written by Richard O'Brien, produced and directed by Jim Sharman. It came eighth in a BBC Radio 2 listener poll of the "Nation's Number One Essential Musicals"...
(celebrating its 21st Birthday) and the hugely successful Royal Court Classics Season in 1995. Comedian Pat Condell
Pat Condell
Patrick Condell is an Irish-English writer, political commentator, comedian, UKIP patron and atheist internet personality. He performed alternative comedy shows during the 1980s and 1990s in the United Kingdom, and won a Time Out Comedy Award in 1991...
also did comedy sketches which were later released onto DVD.

Today, the theatre is the London headquarters of the Ambassador Theatre Group
Ambassador Theatre Group
The Ambassador Theatre Group is an independent operator of theatres in the United Kingdom. Formed in 1992, by Howard Panter and Rosemary Squire,OBE, it acquired the Live Nation theatre group in November 2009.-List of theatres:...
, forming part of their portfolio of eight venues. It is also the producing offices of Sonia Friedman Productions
Sonia Friedman
Sonia Friedman is a prolific British West End and Broadway theatre producer. She is the younger sister of actress Maria Friedman.-Biography and career:...
, whose revival of In Celebration starring Hollywood leading man Orlando Bloom
Orlando Bloom
Orlando Jonathan Blanchard Bloom is an English actor. He had his break-through roles in 2001 as the elf-prince Legolas in The Lord of the Rings and starring in 2003 as blacksmith Will Turner in the Pirates of the Caribbean film series, and subsequently established himself as a lead in Hollywood...
played until 15 September 2007.