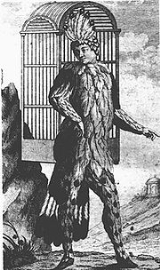 Overview
The Magic Flute is an opera
Opera
Opera is an art form in which singers and musicians perform a dramatic work combining text and musical score, usually in a theatrical setting. Opera incorporates many of the elements of spoken theatre, such as acting, scenery, and costumes and sometimes includes dance...
in two acts composed in 1791 by Wolfgang Amadeus Mozart
Wolfgang Amadeus Mozart
Wolfgang Amadeus Mozart , baptismal name Johannes Chrysostomus Wolfgangus Theophilus Mozart , was a prolific and influential composer of the Classical era. He composed over 600 works, many acknowledged as pinnacles of symphonic, concertante, chamber, piano, operatic, and choral music...
to a German libretto
Libretto
A libretto is the text used in an extended musical work such as an opera, operetta, masque, oratorio, cantata, or musical. The term "libretto" is also sometimes used to refer to the text of major liturgical works, such as mass, requiem, and sacred cantata, or even the story line of a...
by Emanuel Schikaneder
Emanuel Schikaneder
Emanuel Schikaneder , born Johann Joseph Schickeneder, was a German impresario, dramatist, actor, singer and composer. He was the librettist of Wolfgang Amadeus Mozart's opera The Magic Flute and the builder of the Theater an der Wien...
. The work is in the form of a Singspiel
Singspiel
A Singspiel is a form of German-language music drama, now regarded as a genre of opera...
, a popular form that included both singing and spoken dialogue.
The opera was premiered in Vienna
Vienna
Vienna is the capital and largest city of the Republic of Austria and one of the nine states of Austria. Vienna is Austria's primary city, with a population of about 1.723 million , and is by far the largest city in Austria, as well as its cultural, economic, and political centre...
on 30 September 1791, at the suburban Freihaus-Theater auf der Wieden
Theater auf der Wieden
The Theater auf der Wieden, also called the Freihaus-Theater auf der Wieden or the Wiednertheater, was a theater located in the then-suburban Wieden district of Vienna in the late 18th century...
. Mozart conducted the orchestra, Schikaneder himself played Papageno, while the role of the Queen of the Night was sung by Mozart's sister-in-law Josepha Hofer
Josepha Weber
Josepha Weber was a German soprano of the classical era...
.

On the reception of the opera, Mozart scholar Maynard Solomon
Maynard Solomon
Maynard Solomon has carried out a multiple career: he was a co-founder of Vanguard Records as well as a music producer, and later became a writer on music.-Career in the recording industry:...
writes:
The success of The Magic Flute lifted the spirits of its composer, who had fallen ill while in Prague
Prague
Prague is the capital and largest city of the Czech Republic. Situated in the north-west of the country on the Vltava river, the city is home to about 1.3 million people, while its metropolitan area is estimated to have a population of over 2.3 million...
a few weeks before.

Can you please give me all the lyrics used From the 2006 film of Mozart's The Magic Flute (Die Zauberflöte) directed by Kenneth Branagh. Note: i don...
More
x