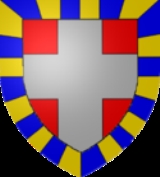 In the mid-13th century the Hohenstaufen
Hohenstaufen
The House of Hohenstaufen was a dynasty of German kings in the High Middle Ages, lasting from 1138 to 1254. Three of these kings were also crowned Holy Roman Emperor. In 1194 the Hohenstaufens also became Kings of Sicily...
Holy Roman Emperor
Holy Roman Emperor
The Holy Roman Emperor is a term used by historians to denote a medieval ruler who, as German King, had also received the title of "Emperor of the Romans" from the Pope...
Frederick II
Frederick II, Holy Roman Emperor
Frederick II , was one of the most powerful Holy Roman Emperors of the Middle Ages and head of the House of Hohenstaufen. His political and cultural ambitions, based in Sicily and stretching through Italy to Germany, and even to Jerusalem, were enormous...
made the County of Aosta a duchy; its arms were carried in the Savoyard coat-of-arms until the unification of Italy in 1870. The region remained part of Savoy lands, with the exception of a French occupation, 1539—1563. The title Duke of Aosta was given to various princes of the dynasty of Sardinia, second sons of the reigning monarch. It can be compared to the English Duke of York
Duke of York
The Duke of York is a title of nobility in the British peerage. Since the 15th century, it has, when granted, usually been given to the second son of the British monarch. The title has been created a remarkable eleven times, eight as "Duke of York" and three as the double-barreled "Duke of York and...
, French Duke of Orléans, Swedish Duke of Södermanland and the Scottish Duke of Albany
Duke of Albany
Duke of Albany is a peerage title that has occasionally been bestowed on the younger sons in the Scottish, and later the British, royal family, particularly in the Houses of Stuart and Hanover....
. It remained in the branch of Prince Amedeo of Savoia, the second son of king Victor Emanuel II of Italy, as he was the first ever cadet prince Duke of Aosta who left male heirs. The subsidiary titles of the Duke of Aosta are, from the heritage of Maria Vittoria dal Pozzo, the mother of Duke Emanuele Filiberto, Prince della Cisterna and of Belriguardo, Marquess of Voghera, and Count of Ponderano. Ponderano was created in 1559, Voghera in 1618; Cisterna and Belriguardo as princely in 1670. The title has been used since July 2006 by Amedeo's son Prince Aimone, Duke of Apulia (born 1967), who is married to Princess Olga of Greece, younger daughter of Prince Michael of Greece and Denmark
Prince Michael of Greece and Denmark
Prince Michael of Greece and Denmark, is the author of several historical novels and biographies, as well as a contributing writer to Architectural Digest.-Birth and family:...
.