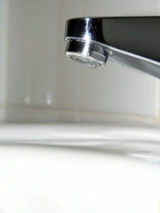 A drop or droplet is a small column of liquid
Liquid
Liquid is one of the three classical states of matter . Like a gas, a liquid is able to flow and take the shape of a container. Some liquids resist compression, while others can be compressed. Unlike a gas, a liquid does not disperse to fill every space of a container, and maintains a fairly...
, bounded completely or almost completely by free surface
Free surface
In physics, a free surface is the surface of a fluid that is subject to constant perpendicular normal stress and zero parallel shear stress,such as the boundary between two homogenous fluids,for example liquid water and the air in the Earth's atmosphere...
s. A drop may form when liquid accumulates at the lower end of a tube or other surface boundary, producing a hanging drop called a pendant
Pendant
A pendant is a loose-hanging piece of jewellery, generally attached by a small loop to a necklace, when the ensemble may be known as a "pendant necklace". A pendant earring is an earring with a piece hanging down. In modern French "pendant" is the gerund form of “hanging”...
drop. Drops may also be formed by the condensation
Condensation
Condensation is the change of the physical state of matter from gaseous phase into liquid phase, and is the reverse of vaporization. When the transition happens from the gaseous phase into the solid phase directly, the change is called deposition....
of a vapor
Vapor
A vapor or vapour is a substance in the gas phase at a temperature lower than its critical point....
or by atomization
Atomizer nozzle
An atomizer nozzle is an aspirator nozzle for producing a fine spray of a liquid based on the Venturi effect.-Principle of operation :When a gas is injected under pressure through a tube with a decreasing section, it speeds up, generating a pressure drop at the narrowest point .The reduced...
of a larger mass of liquid. 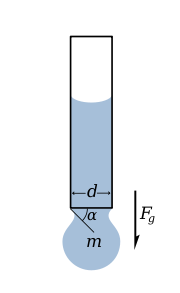 A simple way to form a drop is to allow liquid to flow slowly from the lower end of a vertical tube of small diameter. The surface tension of the liquid causes the liquid to hang from the tube, forming a pendant. When the drop exceeds a certain size it is no longer stable and detaches itself. The falling liquid is also a drop held together by surface tension.

In the pendant drop test, a drop of liquid is suspended from the end of a tube by surface tension
Surface tension
Surface tension is a property of the surface of a liquid that allows it to resist an external force. It is revealed, for example, in floating of some objects on the surface of water, even though they are denser than water, and in the ability of some insects to run on the water surface...
. The force due to surface tension is proportional to the length of the boundary between the liquid and the tube, with the proportionality constant usually denoted

. Since the length of this boundary is the circumference of the tube, the force due to surface tension is given by

where d is the tube diameter.

) with the component of the surface tension in the vertical direction (

The limit of this formula, as α goes to 90°, gives the maximum weight of a pendant drop for a liquid with a given surface tension,

This relationship is the basis of a convenient method of measuring surface tension, commonly used in the petroleum industry. More sophisticated methods are available when the surface tension is unknown that consider the developing shape of the pendant as the drop grows.

The term droplet is a diminutive form of 'drop' - and as a guide is typically used for liquid particles of less than 500 µm diameter. In spray application
Pesticide application
Pesticide application refers to the practical way in which pesticides, are delivered to their biological targets...
, droplets are usually described by their perceived size (i.e., diameter) whereas the dose (or number of infective particles in the case of biopesticide
Biopesticide
Biopesticides include "naturally occurring substances that control pests , microorganisms that control pests , and pesticidal substances produced by plants containing added genetic material or PIPs."Biopesticides are biochemical pesticides that are naturally occurring substances that control pests...
s) is a function of their volume. This increases by a cubic function relative to diameter; thus a 50 µm droplet represents a dose in 65 pl and a 500 µm drop represents a dose in 65 nanolitres.

Due to the different refractive index
Refractive index
In optics the refractive index or index of refraction of a substance or medium is a measure of the speed of light in that medium. It is expressed as a ratio of the speed of light in vacuum relative to that in the considered medium....
of water
Water
Water is a chemical substance with the chemical formula H2O. A water molecule contains one oxygen and two hydrogen atoms connected by covalent bonds. Water is a liquid at ambient conditions, but it often co-exists on Earth with its solid state, ice, and gaseous state . Water also exists in a...
and air
Earth's atmosphere
The atmosphere of Earth is a layer of gases surrounding the planet Earth that is retained by Earth's gravity. The atmosphere protects life on Earth by absorbing ultraviolet solar radiation, warming the surface through heat retention , and reducing temperature extremes between day and night...
, refraction
Refraction
Refraction is the change in direction of a wave due to a change in its speed. It is essentially a surface phenomenon . The phenomenon is mainly in governance to the law of conservation of energy. The proper explanation would be that due to change of medium, the phase velocity of the wave is changed...
and reflection
Reflection (physics)
Reflection is the change in direction of a wavefront at an interface between two differentmedia so that the wavefront returns into the medium from which it originated. Common examples include the reflection of light, sound and water waves...
occur on the surfaces of rain
Rain
Rain is liquid precipitation, as opposed to non-liquid kinds of precipitation such as snow, hail and sleet. Rain requires the presence of a thick layer of the atmosphere to have temperatures above the melting point of water near and above the Earth's surface...
drops, leading to rainbow
Rainbow
A rainbow is an optical and meteorological phenomenon that causes a spectrum of light to appear in the sky when the Sun shines on to droplets of moisture in the Earth's atmosphere. It takes the form of a multicoloured arc...
formation.

The major source of sound when a droplet hits a liquid surface is the resonance of excited bubbles trapped underwater. These oscillating bubbles are responsible for most liquid sounds, such as running water or splashes, as they actually consist of many drop-liquid collisions. 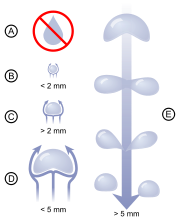 The classic shape associated with a drop (with a pointy end in its upper side) comes from the observation of a droplet clinging to a surface. The shape of a drop falling through a gas is actually more or less spherical. Larger drops tend to be flatter on the bottom part due to the pressure of the gas they move through.

Scientists traditionally thought that the variation in the size of raindrops was due to collisions on the way down to the ground. In 2009 French researchers succeeded in showing that the distribution of sizes is due to the drops' interaction with air, which deforms larger drops and causes them to fragment into smaller drops, effectively limiting the largest raindrops to about 6 mm diameter.