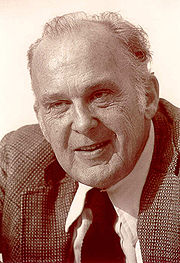 Donald Thomas Campbell was an American
United States
The United States of America is a federal constitutional republic comprising fifty states and a federal district...
social scientist. He is noted for his work in methodology
Methodology
Methodology is generally a guideline for solving a problem, with specificcomponents such as phases, tasks, methods, techniques and tools . It can be defined also as follows:...
. He coined the term "evolutionary epistemology
Evolutionary epistemology
Evolutionary epistemology refers to two distinct topics - on the one hand, the biological evolution of cognitive mechanisms in animals and humans, and on the other hand, a theory in that knowledge itself evolves by natural selection....
" and developed a selectionist theory of human creativity
Creativity
Creativity refers to the phenomenon whereby a person creates something new that has some kind of value. What counts as "new" may be in reference to the individual creator, or to the society or domain within which the novelty occurs...
.

After serving in the U.S. Naval Reserve during World War II
World War II
World War II, or the Second World War , was a global conflict lasting from 1939 to 1945, involving most of the world's nations—including all of the great powers—eventually forming two opposing military alliances: the Allies and the Axis...
, he earned his doctorate in psychology in 1947 from UC Berkeley
University of California, Berkeley
The University of California, Berkeley , is a teaching and research university established in 1868 and located in Berkeley, California, USA...
. He subsequently served on the faculties at Ohio State
Ohio State University
The Ohio State University, commonly referred to as Ohio State, is a public research university located in Columbus, Ohio. It was originally founded in 1870 as a land-grant university and is currently the third largest university campus in the United States...
, the University of Chicago
University of Chicago
The University of Chicago is a private research university in Chicago, Illinois, USA. It was founded by the American Baptist Education Society with a donation from oil magnate and philanthropist John D. Rockefeller and incorporated in 1890...
, Northwestern
Northwestern University
Northwestern University is a private research university in Evanston and Chicago, Illinois, USA. Northwestern has eleven undergraduate, graduate, and professional schools offering 124 undergraduate degrees and 145 graduate and professional degrees....
, and Lehigh
Lehigh University
Lehigh University is a private, co-educational university located in Bethlehem, Pennsylvania, in the Lehigh Valley region of the United States. It was established in 1865 by Asa Packer as a four-year technical school, but has grown to include studies in a wide variety of disciplines...
.

He taught at Lehigh University
Lehigh University
Lehigh University is a private, co-educational university located in Bethlehem, Pennsylvania, in the Lehigh Valley region of the United States. It was established in 1865 by Asa Packer as a four-year technical school, but has grown to include studies in a wide variety of disciplines...
, which established the Donald T. Campbell Social Science Research Prizes. Prior to that he was on the faculty of Maxwell School
Maxwell School of Citizenship and Public Affairs
The Maxwell School of Citizenship and Public Affairs is the public policy school of Syracuse University...
of Syracuse University
Syracuse University
Syracuse University is a private research university located in Syracuse, New York, United States. Its roots can be traced back to Genesee Wesleyan Seminary, founded by the Methodist Episcopal Church in 1832, which also later founded Genesee College...
, 1979–1982, and Northwestern University
Northwestern University
Northwestern University is a private research university in Evanston and Chicago, Illinois, USA. Northwestern has eleven undergraduate, graduate, and professional schools offering 124 undergraduate degrees and 145 graduate and professional degrees....
from 1953 to 1979. He gave the William James Lecture
William James Lectures
The William James Lectures are a series of invited lectureships at Harvard University sponsored by the Departments of Philosophy and Psychology, who alternate in the selection of speakers. The series was created in honor of the American Pragmatist philosopher William James, a former faculty member...
at Harvard University
Harvard University
Harvard University is a private Ivy League university located in Cambridge, Massachusetts, United States, established in 1636 by the Massachusetts legislature. Harvard is the oldest institution of higher learning in the United States and the first corporation chartered in the country...
in 1977.

Campbell made contributions in a wide range of disciplines like psychology
Psychology
Psychology is the study of the mind and behavior. Its immediate goal is to understand individuals and groups by both establishing general principles and researching specific cases. For many, the ultimate goal of psychology is to benefit society...
, sociology
Sociology
Sociology is the study of society. It is a social science—a term with which it is sometimes synonymous—which uses various methods of empirical investigation and critical analysis to develop a body of knowledge about human social activity...
, anthropology
Anthropology
Anthropology is the study of humanity. It has origins in the humanities, the natural sciences, and the social sciences. The term "anthropology" is from the Greek anthrōpos , "man", understood to mean mankind or humanity, and -logia , "discourse" or "study", and was first used in 1501 by German...
, biology
Biology
Biology is a natural science concerned with the study of life and living organisms, including their structure, function, growth, origin, evolution, distribution, and taxonomy. Biology is a vast subject containing many subdivisions, topics, and disciplines...
and philosophy
Philosophy
Philosophy is the study of general and fundamental problems, such as those connected with existence, knowledge, values, reason, mind, and language. Philosophy is distinguished from other ways of addressing such problems by its critical, generally systematic approach and its reliance on rational...
.

He had as a major focus throughout his career the study of false knowledge -- the biases and prejudices that poison everything from race relations to academic disciplines where those with vested interests in them perpetuate erroneous theories.


Convergent and Discriminant Validation by the Multitrait-Multimethod Matrix

Dr. Campbell argued that the sophisticated use of many approaches, each with its own distinct but measurable flaws, was required to design reliable research projects. The paper he wrote with Donald W. Fiske to present this thesis, "Convergent and Discriminant Validation by the Multitrait-Multimethod Matrix," is one of the most frequently cited papers in the social science literature.

Blind Variation and Selective Retention (BVSR) is a phrase introduced by Donald T. Campbell to describe the most fundamental principle underlying Darwinian evolution. In cybernetics
Cybernetics
Cybernetics is the interdisciplinary study of the structure of regulatory systems. Cybernetics is closely related to information theory, control theory and systems theory, at least in its first-order form...
, it is seen as a principle for describing change in evolutionary systems in general, not just in biological organisms. For example, it can also be applied to scientific discovery, meme
Meme
A meme is "an idea, behaviour or style that spreads from person to person within a culture."A meme acts as a unit for carrying cultural ideas, symbols or practices, which can be transmitted from one mind to another through writing, speech, gestures, rituals or other imitable phenomena...
tic evolution or genetic programming
Genetic programming
In artificial intelligence, genetic programming is an evolutionary algorithm-based methodology inspired by biological evolution to find computer programs that perform a user-defined task. It is a specialization of genetic algorithms where each individual is a computer program...
. As such, it forms a foundation for what has later been called Universal Darwinism
Universal darwinism
Universal Darwinism refers to a variety of approaches that extend the theory of Darwinism beyond its original domain of biological evolution on Earth...
.

Applying the BVSR principle to the evolution of knowledge, Campbell founded the domain of evolutionary epistemology
Evolutionary epistemology
Evolutionary epistemology refers to two distinct topics - on the one hand, the biological evolution of cognitive mechanisms in animals and humans, and on the other hand, a theory in that knowledge itself evolves by natural selection....
. This can be seen as a generalization of Karl Popper
Karl Popper
Sir Karl Raimund Popper, CH FRS FBA was an Austro-British philosopher and a professor at the London School of Economics...
's philosophy of science
Philosophy of science
The philosophy of science is concerned with the assumptions, foundations, methods and implications of science. It is also concerned with the use and merit of science and sometimes overlaps metaphysics and epistemology by exploring whether scientific results are actually a study of truth...
, which conceives the development of new theories as a process of proposing conjectures (blind variation) followed by the refutation (selective elimination) of those conjectures that are empirically falsified
Falsification
Falsification may refer to:* The act of disproving a proposition, hypothesis, or theory: see Falsifiability* Mathematical proof* Falsified evidence...
. Campbell added that the same logic of blind variation and selective elimination/retention underlies all knowledge processes, not only scientific ones. Thus, the BVSR mechanism explains creativity
Creativity
Creativity refers to the phenomenon whereby a person creates something new that has some kind of value. What counts as "new" may be in reference to the individual creator, or to the society or domain within which the novelty occurs...
, but also the evolution of instinctive knowledge
Instinct
Instinct or innate behavior is the inherent inclination of a living organism toward a particular behavior.The simplest example of an instinctive behavior is a fixed action pattern, in which a very short to medium length sequence of actions, without variation, are carried out in response to a...
, and of our cognitive abilities
Cognition
In science, cognition refers to mental processes. These processes include attention, remembering, producing and understanding language, solving problems, and making decisions. Cognition is studied in various disciplines such as psychology, philosophy, linguistics, and computer science...
in general.

Campbell also had a vision for how public policy could be improved through use of experimentation. He argued for a more collaborative method of public policy that involved various stakeholders and that used experimentation and data as a guide for decision making. The vision of this was laid out in an essay The Experimenting Society.

His research and book Experimental and Quasi-Experimental Designs for Research became the standard in policy evaluation circles. Campbell did not start out intending to be a program evaluator, but as described in Donald Campbell: The Accidental Evaluator, his devotion to understanding causality, human behavior, and how to solve social questions led him there.


Ethnocentrism of Disciplines and the Fish-Scale Model of Omniscience

Campbell was a wide, wide collaborator and distrustful of academic knowledge of any field whose knowledge resided in small clusters separated from other fields. To parody this situation, he wrote an article on the "Fish-Scale Model of Omniscience" which called for scholars to stray from their immediate discipline and work to create bridges (or fish scales!) between their disclipine and neighboring ones.

"Rather than praying, “May I be a competent and well-read X-ologist, may I keep up with the literature in my field,” a scholar will pray, “Make me a novel fish-scale. Let my pattern of inevitably incomplete competence cover areas neglected by others.” Each scholar would then try to have a pattern of journal subscriptions unique to his or her department, university, or profession. Noting that the scholar and a colleague were reading the same set of journals, the scholar would feel guilty and vow to drop one of these in favor of some other. Recognizing that the interdisciplinary links in the collaborative web of knowledge are the weakest, the scholar would give up some ingroup journal in favor of an outgroup one. The scholar would feel guilty if he or she did not cut attendance at ingroup conventions to attend relevant outgroup ones, and so forth."

In the 1990s, Campbell's formulation of the mechanism of "blind-variation-and-selective-retention" (BVSR) was further developed and extended to other domains under the labels of "universal selection theory" or "universal selectionism" by his disciples Gary Cziko, Mark Bickhard, and Francis Heylighen
Francis Heylighen
Francis Paul Heylighen is a Belgian cyberneticist, and research professor at the Vrije Universiteit Brussel, the Dutch-speaking Free University of Brussels, where he directs the transdisciplinary research group on "Evolution, Complexity and Cognition".-Biography:Francis Heylighen was born on...
.