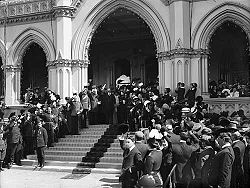 Originally administered from New South Wales
New South Wales
New South Wales is a state of :Australia, located in the east of the country. It is bordered by Queensland, Victoria and South Australia to the north, south and west respectively. To the east, the state is bordered by the Tasman Sea, which forms part of the Pacific Ocean. New South Wales...
, New Zealand became a direct British colony in 1841 and received a large measure of self-government following the New Zealand Constitution Act 1852
New Zealand Constitution Act 1852
The New Zealand Constitution Act 1852 was an Act of the Parliament of the United Kingdom that granted self-government to the colony of New Zealand...
. New Zealand chose not to take part in Australian Federation and assumed complete self-government as the Dominion of New Zealand on 26 September 1907, Dominion Day
Dominion Day
Dominion Day is a commemoration day of the granting of national status in various Commonwealth countries.-Canada:Dominion Day was the name of the holiday commemorating the formation of Canada as a Dominion on 1 July 1867...
, by proclamation of King Edward VII
Edward VII of the United Kingdom
Edward VII was King of the United Kingdom and the British Dominions and Emperor of India from 22 January 1901 until his death in 1910...
.

The alteration in status was stirred by a sentiment on the part of the Prime Minister
Prime minister
A prime minister is the most senior minister of cabinet in the executive branch of government in a parliamentary system. In many systems, the prime minister selects and may dismiss other members of the cabinet, and allocates posts to members within the government. In most systems, the prime...
of the self-governing colonies of the British Empire
British Empire
The British Empire comprised the dominions, colonies, protectorates, mandates and other territories ruled or administered by the United Kingdom. It originated with the overseas colonies and trading posts established by England in the late 16th and early 17th centuries. At its height, it was the...
that a new term was necessary to differentiate them from the non-self-governing colonies, such as (at that time) Fiji
Fiji
Fiji , officially the Republic of Fiji , is an island nation in Melanesia in the South Pacific Ocean about northeast of New Zealand's North Island...
.

It read - "EDWARD R.& I. Whereas We have on the Petition of the Members of the Legislative Council and House of Representatives of Our Colony of New Zealand determined that the title of Dominion of New Zealand shall be substituted for that of the Colony of New Zealand as the designation of the said Colony, We have therefore by and with the advice of Our Privy Council thought fit to issue this Our Royal Proclamation and We do ordain, declare and command that on and after the twenty-sixth day of September, one thousand nine hundred and seven, the said Colony of New Zealand and the territory belonging thereto shall be called and known by the title of the Dominion of New Zealand. And We hereby give Our Commands to all Public Departments accordingly. Given at Our Court at Buckingham Palace, this ninth day of September, in the year of Our Lord one thousand nine hundred and seven, and in the seventh year of Our Reign. GOD save the KING."

Dominion status allowed the dominions to become virtually independent, while retaining the British monarch as head of state
Head of State
A head of state is the individual that serves as the chief public representative of a monarchy, republic, federation, commonwealth or other kind of state. His or her role generally includes legitimizing the state and exercising the political powers, functions, and duties granted to the head of...
, represented locally by a governor-general
Governor-General
A Governor-General, is a vice-regal person of a monarch in an independent realm or a major colonial circonscription. Depending on the political arrangement of the territory, a Governor General can be a governor of high rank, or a principal governor ranking above "ordinary" governors.- Current uses...
appointed in consultation with the Dominion’s government. Control over defence, constitutional amendments and (partially) foreign affairs, remained with the British government, until the Statute of Westminster was adopted.

In 1907 new Letters Patent
Letters patent
Letters patent are a type of legal instrument in the form of a published written order issued by a monarch or president, generally granting an office, right, monopoly, title, or status to a person or corporation...
were issued to mark New Zealand’s change in status from Crown Colony
Crown colony
A Crown colony, also known in the 17th century as royal colony, was a type of colonial administration of the English and later British Empire....
to Dominion declaring that: “there shall be a Governor and Commander-in-Chief in and over Our Dominion of New Zealand”.

Despite this new status, there was some apprehension in 1919 when Prime Minister Bill Massey
William Massey
William Ferguson Massey, often known as Bill Massey or "Farmer Bill" served as the 19th Prime Minister of New Zealand from 1912 to 1925, and was the founder of the Reform Party. He is widely considered to have been one of the more skilled politicians of his time, and was known for the particular...
signed the Treaty of Versailles
Treaty of Versailles
The Treaty of Versailles was one of the peace treaties at the end of World War I. It ended the state of war between Germany and the Allied Powers. It was signed on 28 June 1919, exactly five years after the assassination of Archduke Franz Ferdinand. The other Central Powers on the German side of...
(giving New Zealand membership of the League of Nations
League of Nations
The League of Nations was an intergovernmental organization founded as a result of the Paris Peace Conference that ended the First World War. It was the first permanent international organization whose principal mission was to maintain world peace...
), which indicated that New Zealand did have a degree of control over its foreign affairs. Massey was unequivocally an Imperialist, and fervently supported the British Empire
British Empire
The British Empire comprised the dominions, colonies, protectorates, mandates and other territories ruled or administered by the United Kingdom. It originated with the overseas colonies and trading posts established by England in the late 16th and early 17th centuries. At its height, it was the...
.

In 1926 the imperial conference devised the Balfour formula of dominion status, stating that the United Kingdom and the Dominions:The Balfour Report further resolved that Governors-General occupied “the same position in relation to the administration of public affairs in the Dominion” as was held by the Monarch in the United Kingdom. The only advisers to the Governor-General and the Monarch in New Zealand were his New Zealand Ministers.

Prime Minister Gordon Coates
Gordon Coates
Joseph Gordon Coates, MC and bar served as the 21st Prime Minister of New Zealand from 1925 to 1928.- Early life :Born on the Hukatere Peninsula in Kaipara Harbour where his family ran a farm, Coates took on significant responsibility at a relatively early age because his father suffered from...
, who led the New Zealand delegation to the 1926 Conference, called the Balfour Declaration a 'poisonous document' that would weaken the ties of empire.

At the 1930 Imperial Conference, the conclusions of the conference were re-stated, and Sir Thomas Sidey
Thomas Sidey
Sir Thomas Kay Sidey was a New Zealand politician from the Otago Region, remembered for his successful advocacy of daylight saving time.-Early life:...
obtained a clause exempting New Zealand from the Statute of Westminster
Statute of Westminster 1931
The Statute of Westminster 1931 is an Act of the Parliament of the United Kingdom. Passed on 11 December 1931, the Act established legislative equality for the self-governing dominions of the British Empire with the United Kingdom...
until such time as it should be ratified by the New Zealand Parliament.

To mark the granting of Dominion status, 26 September was declared Dominion Day. Today, it is observed only as a Provincial Anniversary Day holiday in South Canterbury
Canterbury, New Zealand
The New Zealand region of Canterbury is mainly composed of the Canterbury Plains and the surrounding mountains. Its main city, Christchurch, hosts the main office of the Christchurch City Council, the Canterbury Regional Council - called Environment Canterbury - and the University of Canterbury.-...
. There is support in some quarters for the day to be revived as an alternative New Zealand Day, instead of renaming Waitangi Day
Waitangi Day
Waitangi Day commemorates a significant day in the history of New Zealand. It is a public holiday held each year on 6 February to celebrate the signing of the Treaty of Waitangi, New Zealand's founding document, on that date in 1840.-History:...
, New Zealand's current national day. The Wellington newspaper The Dominion (now The Dominion Post
The Dominion Post (Wellington)
The Dominion Post is a metropolitan broadsheet newspaper published in Wellington, New Zealand, owned by the Australian Fairfax group, owners of The Age, Melbourne, and The Sydney Morning Herald.- Foundation :...
) was first published on this day in 1907.

In 1931, the British Parliament passed the Statute of Westminster, which confirmed complete autonomy for its dominions, and gave effect to resolutions passed by the imperial conferences of 1926 and 1930.

In 1953 Her Majesty proclaimed a separate Royal Title for use in New Zealand .
However there was no proclamation that the official status of New Zealand had been changed from Dominion of New Zealand. Furthermore the proclamation of 1907 was not revoked or amended. The term Dominion gradually fell into disuse after 1953, and has been rarely used since the 1970s. Since then the term "Realm" has been increasingly used for New Zealand.