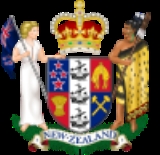 Encyclopedia
The coat of arms of New Zealand is the official symbol of New Zealand
New Zealand
New Zealand is an island country in the south-western Pacific Ocean comprising two main landmasses and numerous smaller islands. The country is situated some east of Australia across the Tasman Sea, and roughly south of the Pacific island nations of New Caledonia, Fiji, and Tonga...
. The initial coat of arms
Coat of arms
A coat of arms is a unique heraldic design on a shield or escutcheon or on a surcoat or tabard used to cover and protect armour and to identify the wearer. Thus the term is often stated as "coat-armour", because it was anciently displayed on the front of a coat of cloth...
was granted by King George V
George V of the United Kingdom
George V was King of the United Kingdom and the British Dominions, and Emperor of India, from 6 May 1910 through the First World War until his death in 1936....
on the 26 August 1911, and the current version was granted by Queen Elizabeth II in 1956.

Until 1911, New Zealand used the same national coat of arms as the United Kingdom
United Kingdom
The United Kingdom of Great Britain and Northern IrelandIn the United Kingdom and Dependencies, other languages have been officially recognised as legitimate autochthonous languages under the European Charter for Regional or Minority Languages...
. When New Zealand became a Dominion
Dominion of New Zealand
The Dominion of New Zealand is the former name of the Realm of New Zealand.Originally administered from New South Wales, New Zealand became a direct British colony in 1841 and received a large measure of self-government following the New Zealand Constitution Act 1852...
in 1907, it was decided that a new Coat of Arms was required, and a design competition was held. The winning entry was a design by James McDonald, a draughtsman in the Department of Tourist and Health Resorts. Since being granted its own arms in 1911, New Zealand's arms have remained similar to the current design, with minor changes in 1956.

Since 1911, the central shield has remained unaltered: a quartered shield containing in the first quarter four stars representing the Southern Cross constellation
Crux
Crux is the smallest of the 88 modern constellations, but is one of the most distinctive. Its name is Latin for cross, and it is dominated by a cross-shaped asterism that is commonly known as the Southern Cross.-Visibility:...
, as depicted on the national flag
Flag of New Zealand
The flag of New Zealand is a defaced Blue Ensign with the Union Flag in the canton, and four red stars with white borders to the right. The stars represent the constellation of Crux, the Southern Cross....
, but with the stars in different proportions; in the second quarter, a golden fleece
Golden Fleece
In Greek mythology, the Golden Fleece is the fleece of the gold-haired winged ram, which can be procured in Colchis. It figures in the tale of Jason and his band of Argonauts, who set out on a quest by order of King Pelias for the fleece in order to place Jason rightfully on the throne of Iolcus...
representing the farming industry; in the third, a wheat sheaf representing agriculture; and in the fourth, two hammers representing mining and industry. Over all this is a pale
Pale (heraldry)
A pale is a term used in heraldic blazon and vexillology to describe a charge on a coat of arms , that takes the form of a band running vertically down the center of the shield. Writers broadly agree that the width of the pale ranges from about one-fifth to about one-third of the width of the...
, a broad vertical strip, with three ships representing the importance of sea trade, and the immigrant nature of all New Zealanders.

Before 1956, the shield was identical, but the surrounding features were different. The crest was a demi-lion (the upper half of a rampant lion) holding the British Union Flag
Union Flag
The Union Flag, also known as the Union Jack, is the flag of the United Kingdom. It retains an official or semi-official status in some Commonwealth Realms; for example, it is known as the Royal Union Flag in Canada. It is also used as an official flag in some of the smaller British overseas...
, and the scroll at the shield's base featured the then motto
Motto
A motto is a phrase meant to formally summarize the general motivation or intention of a social group or organization. A motto may be in any language, but Latin is the most used. The local language is usual in the mottoes of governments...
of the country, "Onward". Early renditions of the Coat of Arms are often featured with more stylised scrolling rather than fern leaves.

The original supporters were also slightly different. The woman had reddish-brown hair, and both figures faced forward rather than towards the shield. Though there is no direct documentary evidence, it is likely that the original model for the woman was Wellington
Wellington
Wellington is the capital city and third most populous urban area of New Zealand, although it is likely to have surpassed Christchurch due to the exodus following the Canterbury Earthquake. It is at the southwestern tip of the North Island, between Cook Strait and the Rimutaka Range...
socialite
Socialite
A socialite is a person who participates in social activities and spends a significant amount of time entertaining and being entertained at fashionable upper-class events....
Alice Spragg. The model for the Māori warrior is unknown.

One month prior to New Zealand's adoption of the Statute of Westminster
Statute of Westminster Adoption Act 1947
The Statute of Westminster Adoption Act 1947 was a constitutional Act of the New Zealand Parliament that formally accepted the full external autonomy offered by the British Parliament...
on 25 September 1947, a special committee was formed by then Prime Minister Peter Fraser
Peter Fraser
Peter Fraser was a New Zealand political figure who served as the 24th Prime Minister from 27 March 1940 until 13 December 1949. He assumed the office nearly seven months after the outbreak of World War II and remained as head of government for almost ten years...
. The committee was responsible for the "redrawing and standardisation of the Coat of Arms." Consisting of Alistair McIntosh, Joseph Heenan, Dr Colin Aickman, Frank Corner, Foss Shanahan and Professor John Cawte Beaglehole
John Cawte Beaglehole
John Cawte Beaglehole, OM, CMG was a New Zealand historian whose greatest scholastic achievement was the editing of James Cook’s three journals of exploration, together with the writing of an acclaimed biography of Cook, published posthumously...
. One of the committee's concerns was that the female supporter looked too much like a "Soviet heroine". Following the election of the first National Government in 1949, the new Attorney-General, John Marshall
John Marshall
John Marshall was the Chief Justice of the United States whose court opinions helped lay the basis for American constitutional law and made the Supreme Court of the United States a coequal branch of government along with the legislative and executive branches...
(later Deputy Prime Minister and Prime Minister) took up responsibility for the committee. Marshall requested the woman to be re-drawn based on the likeness of Grace Kelly
Grace Kelly
Grace Patricia Kelly was an American actress who, in April 1956, married Rainier III, Prince of Monaco, to become Princess consort of Monaco, styled as Her Serene Highness The Princess of Monaco, and commonly referred to as Princess Grace.After embarking on an acting career in 1950, at the age of...
, a favourite actress of his.

The shield is now supported by two figures, a blonde woman of European descent holding the New Zealand flag, and a Māori warrior holding a taiaha (Māori ceremonial spear). The shield is topped with the St Edward's Crown, and beneath the shield are two silver fern leaves and a scroll bearing the words "New Zealand".