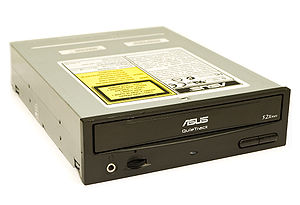 Music
Music
Music is an art form whose medium is sound and silence. Its common elements are pitch , rhythm , dynamics, and the sonic qualities of timbre and texture...
al and audio information was originally recorded by analog methods (see Sound recording and reproduction
Sound recording and reproduction
Sound recording and reproduction is an electrical or mechanical inscription and re-creation of sound waves, such as spoken voice, singing, instrumental music, or sound effects. The two main classes of sound recording technology are analog recording and digital recording...
). Similarly the first video disc
Laserdisc
LaserDisc was a home video format and the first commercial optical disc storage medium. Initially licensed, sold, and marketed as MCA DiscoVision in North America in 1978, the technology was previously referred to interally as Optical Videodisc System, Reflective Optical Videodisc, Laser Optical...
used an analog recording method. In the music industry, analog recording has been mostly replaced by digital optical technology where the data is recorded in a digital format with optical information.

The first commercial digital disk storage device was the IBM RAMAC 350 shipped in 1956 as a part of the IBM 305 RAMAC computing system. The random-access, low-density storage of disks was developed to complement the already used sequential-access
Sequential access
In computer science, sequential access means that a group of elements is accessed in a predetermined, ordered sequence. Sequential access is sometimes the only way of accessing the data, for example if it is on a tape...
, high-density storage provided by tape drive
Tape drive
A tape drive is a data storage device that reads and performs digital recording, writes data on a magnetic tape. Magnetic tape data storage is typically used for offline, archival data storage. Tape media generally has a favorable unit cost and long archival stability.A tape drive provides...
s using magnetic tape
Magnetic tape
Magnetic tape is a medium for magnetic recording, made of a thin magnetizable coating on a long, narrow strip of plastic. It was developed in Germany, based on magnetic wire recording. Devices that record and play back audio and video using magnetic tape are tape recorders and video tape recorders...
. Vigorous innovation in disk storage technology, coupled with less vigorous innovation in tape storage, has reduced the density and cost per bit gap between disk and tape, reducing the importance of tape as a complement to disk.

Disk storage is now used in both computer storage and consumer electronic storage, e.g., audio CD
CD-ROM
A CD-ROM is a pre-pressed compact disc that contains data accessible to, but not writable by, a computer for data storage and music playback. The 1985 “Yellow Book” standard developed by Sony and Philips adapted the format to hold any form of binary data....
s and video discs (standard DVD and Blu-ray
Blu-ray Disc
Blu-ray Disc is an optical disc storage medium designed to supersede the DVD format. The plastic disc is 120 mm in diameter and 1.2 mm thick, the same size as DVDs and CDs. Blu-ray Discs contain 25 GB per layer, with dual layer discs being the norm for feature-length video discs...
).

Digital disk drives are block storage devices. Each disk is divided into logical blocks
Block (data storage)
In computing , a block is a sequence of bytes or bits, having a nominal length . Data thus structured are said to be blocked. The process of putting data into blocks is called blocking. Blocking is used to facilitate the handling of the data-stream by the computer program receiving the data...
(collection of sectors). Blocks are addressed using their logical block addresses
Logical block addressing
Logical block addressing is a common scheme used for specifying the location of blocks of data stored on computer storage devices, generally secondary storage systems such as hard disks....
(LBA). Read from or writing to disk happens at the granularity of blocks.

Originally the disk capacity was quite low and has been improved in one of several ways. Improvements in mechanical design and manufacture allowed smaller and more accurate heads, meaning that more tracks could be stored on each of the disks. Advancements in data compression methods permitted more information to be stored in each of the individual sectors.

The drive stores data onto cylinders, heads, and sectors
Cylinder-head-sector
Cylinder-head-sector, also known as CHS, was an early method for giving addresses to each physical block of data on a hard disk drive. In the case of floppy drives, for which the same exact diskette medium can be truly low-level formatted to different capacities, this is still true.Though CHS...
. The sectors unit is the smallest size of data to be stored in a hard disk drive and each file will have many sectors units assigned to it. The smallest entity in a CD is called a frame, which consists of 33 bytes and contains six complete 16-bit stereo samples (two bytes × two channels × six samples = 24 bytes). The other nine bytes consist of eight CIRC error-correction bytes and one subcode
Compact disc subcode
Besides digital audio, a compact disc contains digital data called subcode or subchannel data, which is multiplexed with the digital audio. The data in a CD are arranged in frames. A frame comprises 33 bytes, of which 24 bytes are audio , eight bytes are error correction , and one byte is for subcode...
byte used for control and display.

The information is sent from the computer processor to the BIOS into a chip controlling the data transfer. This is then sent out to the hard drive via a multi-wire connector. Once the data is received onto the circuit board of the drive, it is translated and compressed into a format that the individual drive can use to store onto the disk itself. The data is then passed to a chip on the circuit board that controls the access to the drive. The drive is divided into sectors of data stored onto one of the sides of one of the internal disks. An HDD with two disks internally will typically store data on all four surfaces.

The hardware on the drive tells the actuator arm where it is to go for the relevant track and the compressed information is then sent down to the head which changes the physical properties, optically or magnetically for example, of each byte on the drive, thus storing the information. A file is not stored in a linear manner, rather, it is held in the best way for quickest retrieval.

Mechanically there are two different motions occurring inside the drive. One is the rotation of the disks inside the device. The other is the side-to-side motion of the heads across the disk as it moves between tracks.

There are two types of disk rotation methods:

Track positioning also follows two different methods across disk storage devices. Storage devices focused on holding computer data, e.g., HDDs, FDDs, Iomega zip drive
Zip drive
The Zip drive is a medium-capacity removable disk storage system that was introduced by Iomega in late 1994. Originally, Zip disks launched with capacities of 100 MB, but later versions increased this to first 250 MB and then 750 MB....
s, use concentric tracks to store data. During a sequential read or write operation, after the drive accesses all the sectors in a track it repositions the head(s) to the next track. This will cause a momentary delay in the flow of data between the device and the computer. In contrast, optical audio and video discs use a single spiral
Spiral
In mathematics, a spiral is a curve which emanates from a central point, getting progressively farther away as it revolves around the point.-Spiral or helix:...
track that starts at the inner most point on the disc and flows continuously to the outer edge. When reading or writing data there is no need to stop the flow of data to switch tracks. This is similar to vinyl records except vinyl records started at the outer edge and spiraled in toward the center.

The disk drive interface is the mechanism/protocol of communication between the rest of the system and the disk drive itself. Storage devices intended for desktop and mobile computers typically use ATA
AT Attachment
Parallel ATA , originally ATA, is an interface standard for the connection of storage devices such as hard disks, solid-state drives, floppy drives, and optical disc drives in computers. The standard is maintained by X3/INCITS committee...
(PATA) and SATA
Serial ATA
Serial ATA is a computer bus interface for connecting host bus adapters to mass storage devices such as hard disk drives and optical drives...
interfaces. Enterprise systems and high-end storage devices will typically use SCSI
SCSI
Small Computer System Interface is a set of standards for physically connecting and transferring data between computers and peripheral devices. The SCSI standards define commands, protocols, and electrical and optical interfaces. SCSI is most commonly used for hard disks and tape drives, but it...
, SAS
Serial Attached SCSI
Serial Attached SCSI is a computer bus used to move data to and from computer storage devices such as hard drives and tape drives. SAS depends on a point-to-point serial protocol that replaces the parallel SCSI bus technology that first appeared in the mid 1980s in data centers and workstations,...
, and FC
Fibre Channel
Fibre Channel, or FC, is a gigabit-speed network technology primarily used for storage networking. Fibre Channel is standardized in the T11 Technical Committee of the InterNational Committee for Information Technology Standards , an American National Standards Institute –accredited standards...
interfaces in addition to some use of SATA.