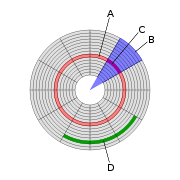 In computer disk storage, a sector is a subdivision of a track
Track (disk drive)
A disk drive track is a circular path on the surface of a disk or diskette on which information is magnetically recorded and from which recorded information is read....
on a magnetic disk or optical disc
Optical disc
In computing and optical disc recording technologies, an optical disc is a flat, usually circular disc which encodes binary data in the form of pits and lands on a special material on one of its flat surfaces...
. Each sector stores a fixed amount of user data. Traditional formatting of these storage media provides space for 512 bytes or 2048 bytes of user-accessible data per sector. Newer hard drives use 4096 byte (4 KB or 4K) Advanced Format
Advanced Format
Advanced Format is a generic term pertaining to any sector format used to store data on the magnetic disks in hard disk drives that exceeds 512 to 520 bytes per sector. Advanced Format is also considered a milestone technology in the history of hard-drive storage, where data has been processed in...
sectors.

Mathematically, the word sector
Sector
- Places :* Sector, Devon, a location in the county of Devon in south-western England* Sector, West Virginia, an unincorporated community in Hampshire County, West Virginia, United States of America- In computing :...
means a portion of a disk between a center, two radii
Radius
In classical geometry, a radius of a circle or sphere is any line segment from its center to its perimeter. By extension, the radius of a circle or sphere is the length of any such segment, which is half the diameter. If the object does not have an obvious center, the term may refer to its...
and a corresponding arc
Arc
Arc may refer to:-Mathematics:*Arc , a segment of a differentiable curve*Arc , a particular type of set of points of a projective plane*Arcminute, a measure used for angles, equal to 1/60th of a degree...
(see Figure 1, item B), which is shaped like a slice of a pie. Thus, the disk sector (Figure 1, item C) refers to the intersection of a track and mathematical sector.

In disk drives, each physical sector is made up of three basic parts, the sector header, the data area and the error-correcting code (ECC). The sector header contains information used by the drive and controller. This information includes synch bytes, address identification, flaw flag and header parity bytes. The header may also include an alternate address to be used if the data area is undependable. The address identification is used to insure that the mechanics of the drive have positioned the read/write head over the correct location The data area contains the recorded user data. The ECC field contains codes based on the data field, which are used to check and possibly correct errors that may have been introduced into the data..

Early in the computing industry, the term block
Block (data storage)
In computing , a block is a sequence of bytes or bits, having a nominal length . Data thus structured are said to be blocked. The process of putting data into blocks is called blocking. Blocking is used to facilitate the handling of the data-stream by the computer program receiving the data...
was loosely used to refer to a small chunk of data. Later the term referring to the data area was replaced by sector, and block became associated with the data packets that are passed in various sizes by different types of data streams. For example, the Unix
Unix
Unix is a multitasking, multi-user computer operating system originally developed in 1969 by a group of AT&T employees at Bell Labs, including Ken Thompson, Dennis Ritchie, Brian Kernighan, Douglas McIlroy, and Joe Ossanna...
program
Computer program
A computer program is a sequence of instructions written to perform a specified task with a computer. A computer requires programs to function, typically executing the program's instructions in a central processor. The program has an executable form that the computer can use directly to execute...
dd
Dd (Unix)
In computing, dd is a common Unix program whose primary purpose is the low-level copying and conversion of raw data. According to the manual page for Version 7 Unix, it will "convert and copy a file". It is used to copy a specified number of bytes or blocks, performing on-the-fly byte order...
allows one to set the block size to be used during execution with the parameter bs=bytes. This, however, does not change the actual sector size of a medium, only specifying the size of the blocks that the program will manipulate.

The standard sector size of 512 bytes for magnetic disks was established with the inception of the hard disk drive in 1956. Through a coordinated effort organized by the industry trade organization, International Disk Drive Equipment and Materials Association (IDEMA), leading hardware and software companies started work to define the implementation and standards that would govern sector size formats exceeding 512 bytes to accommodate future increases in data storage capacities.

In the 1970's IBM introduced Direct Access Storage Device
Direct access storage device
In mainframe computers and some minicomputers, a direct access storage device, or DASD , is any secondary storage device which has relatively low access time relative to its capacity....
with Fixed block architecture using sizes of 512, 1024, 2048, or 4096. Cray Research had an 819 disk controller in 1975 that transferred 512 64bit words per sector.

Later, hard disk drives supporting 1,024-byte sectors began to be integrated into consumer electronics devices. Portable media players and digital video cameras were the first products to utilize the larger sector format. By the end of 2007, Samsung and Toshiba began shipments of 1.8-inch hard disk drives with 4096-byte sectors, the sector size designated as the next standard format for all hard drives.

Usage of 4096-byte sectors in the computing segment started in 2008 with hard drives primarily intended for integration into external add-on storage devices. The movement accelerated in 2010, when three of the five hard disk drive manufacturers, Seagate, Toshiba and Western Digital, began producing hard drives using the 4096, or 4K, sector format. After having successfully defined the standard architecture for the technology, IDEMA further united the hard drive industry to orchestrate an industry-wide transition to 4K as the new standard sector size for all applications using hard disk drives. Under the auspices of IDEMA, the date for the transition from 512 to 4096 byte sectors was designated as January 2011, and Advanced Format was coined as the industry term for all future sector formats extending beyond 512 bytes.

Because of the concentric circle arrangement of tracks, defining a sector as the intersection between a radius and a track creates larger sectors towards the outside of the disk. However, each sector still contained the same number of bytes. This was accomplished by reducing the bit density of the outer sectors relative to the inner ones. Modern hard disks use zoned bit recording, where the disk is divided into zones encompassing a small number contiguous tracks. Each zone is then divided into sectors such that each sector had a similar physical size. Because outer zones have a greater circumference than inner zones, they have more sectors per zone. This is known as zoned bit rate.data is stored on the surface of the platter in tracks and sectors tracks are concentric circles

Hard disk drive manufacturers identified the need for large sector sizes to deliver higher capacity points along with improved error correction capabilities. The traditional means of achieving storage capacity increases, which averaged 44 percent per year from 2000 to 2009, were projected to stagnate without revolutionary breakthroughs in magnetic recording system technologies. However, by modifying the length of the data field through the implementation of Advanced Format using 4096-byte sectors, hard disk drive manufacturers could increase the efficiency of the data surface area by five to thirteen percent while increasing the strength of the ECC.