Encyclopedia
Fibre Channel, or FC, is a gigabit
Gigabit
The gigabit is a multiple of the unit bit for digital information or computer storage. The prefix giga is defined in the International System of Units as a multiplier of 109 , and therefore...
-speed network technology primarily used for storage networking. Fibre Channel is standardized in the T11 Technical Committee of the InterNational Committee for Information Technology Standards (INCITS
INCITS
The InterNational Committee for Information Technology Standards, or INCITS , is an ANSI-accredited forum of IT developers. It was formerly known as the X3 and NCITS....
), an American National Standards Institute
American National Standards Institute
The American National Standards Institute is a private non-profit organization that oversees the development of voluntary consensus standards for products, services, processes, systems, and personnel in the United States. The organization also coordinates U.S. standards with international...
(ANSI)–accredited standards committee. Fibre Channel was primarily used in the supercomputer
Supercomputer
A supercomputer is a computer at the frontline of current processing capacity, particularly speed of calculation.Supercomputers are used for highly calculation-intensive tasks such as problems including quantum physics, weather forecasting, climate research, molecular modeling A supercomputer is a...
field, but now, has become the standard connection type for storage area network
Storage area network
A storage area network is a dedicated network that provides access to consolidated, block level data storage. SANs are primarily used to make storage devices, such as disk arrays, tape libraries, and optical jukeboxes, accessible to servers so that the devices appear like locally attached devices...
s (SAN) in enterprise storage
Enterprise storage
In computing, an enterprise storage is the computer storage designed for large-scale, high-technology environments of the modern enterprises. When comparing to the consumer storage, it has higher scalability, higher reliability, better fault tolerance, and much higher initial price.From the...
. Despite its name, Fibre Channel signaling can run on both twisted pair
Twisted pair
Twisted pair cabling is a type of wiring in which two conductors are twisted together for the purposes of canceling out electromagnetic interference from external sources; for instance, electromagnetic radiation from unshielded twisted pair cables, and crosstalk between neighboring pairs...
copper
Copper
Copper is a chemical element with the symbol Cu and atomic number 29. It is a ductile metal with very high thermal and electrical conductivity. Pure copper is soft and malleable; an exposed surface has a reddish-orange tarnish...
wire
Wire
A wire is a single, usually cylindrical, flexible strand or rod of metal. Wires are used to bear mechanical loads and to carry electricity and telecommunications signals. Wire is commonly formed by drawing the metal through a hole in a die or draw plate. Standard sizes are determined by various...
and fiber-optic
Fiber-optic communication
Fiber-optic communication is a method of transmitting information from one place to another by sending pulses of light through an optical fiber. The light forms an electromagnetic carrier wave that is modulated to carry information...
cable
Cable
A cable is two or more wires running side by side and bonded, twisted or braided together to form a single assembly. In mechanics cables, otherwise known as wire ropes, are used for lifting, hauling and towing or conveying force through tension. In electrical engineering cables are used to carry...
s.

Fibre Channel Protocol (FCP) is a transport protocol (similar to TCP
Transmission Control Protocol
The Transmission Control Protocol is one of the core protocols of the Internet Protocol Suite. TCP is one of the two original components of the suite, complementing the Internet Protocol , and therefore the entire suite is commonly referred to as TCP/IP...
used in IP networks) which predominantly transports SCSI commands over Fibre Channel networks.

Fibre Channel started in 1988, with ANSI standard approval in 1994, as a way to simplify the HIPPI
HIPPI
HIPPI is a computer bus for the attachment of high speed storage devices to supercomputers. It was popular in the late 1980s and into the mid-to-late 1990s, but has since been replaced by ever-faster standard interfaces like SCSI and Fibre Channel.The first HIPPI standard defined a 50-wire...
system then in use for similar roles. HIPPI used a massive 50-pair cable with bulky connectors, and had limited cable lengths. When Fibre Channel started to compete for the mass storage market its primary competitor was IBM's proprietary Serial Storage Architecture
Serial Storage Architecture
Serial Storage Architecture is a serial transport protocol used to attach disk drives to servers. It was invented by Ian Judd of IBM in 1990...
(SSA) interface. Eventually the market chose Fibre Channel over SSA, rather than give IBM control over the next generation of mid- to high-end storage technology. Fibre Channel was primarily concerned with simplifying the connections and increasing distances, as opposed to increasing speeds. Later, designers added the goals of connecting SCSI disk storage, providing higher speeds and far greater numbers of connected devices.

There are three major Fibre Channel topologies, describing how a number of ports
Computer port (software)
In computer programming, port has a wide range of meanings.A software port is a virtual/logical data connection that can be used by programs to exchange data directly, instead of going through a file or other temporary storage location...
are connected together. A port in Fibre Channel terminology is any entity that actively communicates over the network, not necessarily a hardware port
Computer port (hardware)
In computer hardware, a port serves as an interface between the computer and other computers or peripheral devices. Physically, a port is a specialized outlet on a piece of equipment to which a plug or cable connects...
. This port is usually implemented in a device such as disk storage, an HBA on a server or a Fibre Channel switch
Fibre Channel switch
In the computer storage field, a Fibre Channel switch is a network switch compatible with the Fibre Channel protocol. It allows the creation of a Fibre Channel fabric, that is currently the core component of most storage area networks . The fabric is a network of Fibre Channel devices which...
.

Fibre Channel does not follow the OSI model
OSI model
The Open Systems Interconnection model is a product of the Open Systems Interconnection effort at the International Organization for Standardization. It is a prescription of characterizing and standardizing the functions of a communications system in terms of abstraction layers. Similar...
layering, but is split similarly into 5 layers, namely:


Layers FC0 through FC2 are also known as FC-PH, the physical layers of Fibre Channel.

Fibre Channel routers operate up to FC4 level (i.e. they may operate as SCSI routers), switches up to FC2, and hubs on FC0 only.

Fibre Channel products are available at 1, 2, 4, 8, 10, 16 and 20 Gbit/s; these protocol flavors are called accordingly 1GFC, 2GFC, 4GFC, 8GFC, 10GFC, 16GFC, or 20GFC. The 16GFC standard was approved by the INCITS T11 committee in 2010, and those products are expected to become available in 2011. Products based on the 1GFC, 2GFC, 4GFC, 8GFC and 16GFC standards should be interoperable and backward compatible. The 1GFC, 2GFC, 4GFC, 8GFC designs all use 8b/10b encoding
8B/10B encoding
In telecommunications, 8b/10b is a line code that maps 8-bit symbols to 10-bit symbols to achieve DC-balance and bounded disparity, and yet provide enough state changes to allow reasonable clock recovery. This means that the difference between the count of 1s and 0s in a string of at least 20 bits...
, while the 16GFC standard uses 64b/66b encoding
64b/66b encoding
In data networking and transmission, 64b/66b is a line code that transforms 64-bit data to 66-bit line code to provide enough state changes to allow reasonable clock recovery and facilitate alignment of the data stream at the receiver....
. Unlike the 10GFC and 20GFC standards, 16GFC provides backward compatibility with 4GFC and 8GFC.

The 10 Gbit/s standard and its 20 Gbit/s derivative, however, are not backward compatible with any of the slower speed devices, as they differ considerably on FC1 level in using 64b/66b encoding
64b/66b encoding
In data networking and transmission, 64b/66b is a line code that transforms 64-bit data to 66-bit line code to provide enough state changes to allow reasonable clock recovery and facilitate alignment of the data stream at the receiver....
instead of 8b/10b encoding
8B/10B encoding
In telecommunications, 8b/10b is a line code that maps 8-bit symbols to 10-bit symbols to achieve DC-balance and bounded disparity, and yet provide enough state changes to allow reasonable clock recovery. This means that the difference between the count of 1s and 0s in a string of at least 20 bits...
, and are primarily used as inter-switch links.

The following types of ports are defined by Fibre Channel:


(*Note: The term "trunking" is not a standard Fibre Channel term and is used by vendors interchangeably. For example: A trunk (an aggregation of ISLs) in a Brocade device is referred to as a Port Channel by Cisco. Whereas Cisco refers to trunking as an EISL.) 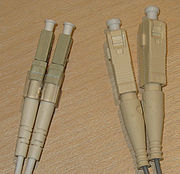 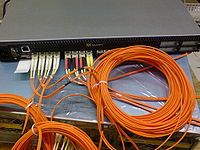 Fibre Channel switches can be divided into two classes. These classes are not part of the standard, and the classification of every switch is a marketing decision of the manufacturer:

A fabric consisting entirely of one vendor is considered to be homogeneous. This is often referred to as operating in its "native mode" and allows the vendor to add proprietary features which may not be compliant with the Fibre Channel standard.

If multiple switch vendors are used within the same fabric it is heterogeneous, the switches may only achieve adjacency if all switches are placed into their interoperability modes. This is called the "open fabric" mode as each vendor's switch may have to disable its proprietary features to comply with the Fibre Channel standard.

Fibre Channel HBA
Host adapter
In computer hardware, a host controller, host adapter, or host bus adapter connects a host system to other network and storage devices...
s are available for all major open systems
Open system (computing)
Open systems are computer systems that provide some combination of interoperability, portability, and open software standards. The term was popularized in the early 1980s, mainly to describe systems based on Unix,...
, computer architectures, and buses, including PCI
Peripheral Component Interconnect
Conventional PCI is a computer bus for attaching hardware devices in a computer...
and SBus
SBus
SBus is a computer bus system that was used in most SPARC-based computers from Sun Microsystems and others during the 1990s...
. Some are OS dependent. Each HBA has a unique World Wide Name
World Wide Name
A World Wide Name or World Wide Identifier is a unique identifier which identifies a particular Fibre Channel, Advanced Technology Attachment or Serial Attached SCSI target...
(WWN), which is similar to an Ethernet MAC address
MAC address
A Media Access Control address is a unique identifier assigned to network interfaces for communications on the physical network segment. MAC addresses are used for numerous network technologies and most IEEE 802 network technologies, including Ethernet...
in that it uses an Organizationally Unique Identifier
Organizationally Unique Identifier
An Organizationally Unique Identifier is a 24-bit number that is purchased from the Institute of Electrical and Electronics Engineers, Incorporated Registration Authority...
(OUI) assigned by the IEEE. However, WWNs are longer (8 byte
Byte
The byte is a unit of digital information in computing and telecommunications that most commonly consists of eight bits. Historically, a byte was the number of bits used to encode a single character of text in a computer and for this reason it is the basic addressable element in many computer...
s). There are two types of WWNs on a HBA; a node WWN (WWNN), which can be shared by some or all ports of a device, and a port WWN (WWPN), which is necessarily unique to each port.

When developing and/or troubleshooting the Fibre Channel bus, examination of hardware signals can be very important to find problems. Logic analyzers and bus analyzers
Bus analyzer
A bus analyzer is a computer bus analysis tool, often a combination of hardware and software, used during development of hardware or device drivers for a specific bus, for diagnosing bus or device failures, or reverse engineering....
are tools which collect, analyze, decode, store signals so people can view the high-speed waveforms at their leisure.