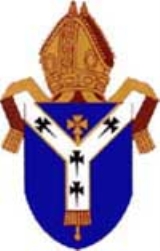 Encyclopedia
The Diocese of Canterbury is a Church of England
Church of England
The Church of England is the officially established Christian church in England and the Mother Church of the worldwide Anglican Communion. The church considers itself within the tradition of Western Christianity and dates its formal establishment principally to the mission to England by St...
diocese covering eastern
East Kent
East Kent and West Kent are one-time traditional subdivisions of the English county of Kent, kept alive by the Association of the Men of Kent and Kentish Men: an organisation formed in 1913...
Kent
Kent
Kent is a county in southeast England, and is one of the home counties. It borders East Sussex, Surrey and Greater London and has a defined boundary with Essex in the middle of the Thames Estuary. The ceremonial county boundaries of Kent include the shire county of Kent and the unitary borough of...
, founded by St. Augustine of Canterbury in 597. It is centred on (and named after) Canterbury Cathedral
Canterbury Cathedral
Canterbury Cathedral in Canterbury, Kent, is one of the oldest and most famous Christian structures in England and forms part of a World Heritage Site....
, and is the oldest see
Episcopal See
An episcopal see is, in the original sense, the official seat of a bishop. This seat, which is also referred to as the bishop's cathedra, is placed in the bishop's principal church, which is therefore called the bishop's cathedral...
of the Church of England.

For organisational purposes, the diocese is divided into three archdeaconries, containing a total of sixteen deaneries
Deanery
A Deanery is an ecclesiastical entity in both the Roman Catholic Church and the Church of England. A deanery is either the jurisdiction or residence of a Dean.- Catholic usage :...
: