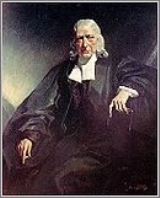 Overview
John Wesley was a Church of England cleric and Christian theologian. Wesley is largely credited, along with his brother Charles Wesley
Charles Wesley
Charles Wesley was an English leader of the Methodist movement, son of Anglican clergyman and poet Samuel Wesley, the younger brother of Anglican clergyman John Wesley and Anglican clergyman Samuel Wesley , and father of musician Samuel Wesley, and grandfather of musician Samuel Sebastian Wesley...
, as founding the Methodist movement
Methodism
Methodism is a movement of Protestant Christianity represented by a number of denominations and organizations, claiming a total of approximately seventy million adherents worldwide. The movement traces its roots to John Wesley's evangelistic revival movement within Anglicanism. His younger brother...
which began when he took to open-air preaching
Open-air preaching
Open-air preaching, street preaching or public preaching is the act of publicly proclaiming a religious message to crowds of people in open places...
in a similar manner to George Whitefield
George Whitefield
George Whitefield , also known as George Whitfield, was an English Anglican priest who helped spread the Great Awakening in Britain, and especially in the British North American colonies. He was one of the founders of Methodism and of the evangelical movement generally...
. In contrast to George Whitefield's Calvinism
Calvinism
Calvinism is a Protestant theological system and an approach to the Christian life...
, Wesley embraced the Arminian doctrines that were dominant in the 18th-century Church of England. Methodism in both forms was a highly successful evangelical
Evangelicalism
Evangelicalism is a Protestant Christian movement which began in Great Britain in the 1730s and gained popularity in the United States during the series of Great Awakenings of the 18th and 19th century.Its key commitments are:...
movement in the United Kingdom, which encouraged people to experience Jesus Christ personally.

Wesley's teachings, known as Wesleyanism
Wesleyanism
Wesleyanism or Wesleyan theology refers, respectively, to either the eponymous movement of Protestant Christians who have historically sought to follow the methods or theology of the eighteenth-century evangelical reformers, John Wesley and his brother Charles Wesley, or to the likewise eponymous...
, provided the seeds for both the modern Methodist movement, the Holiness movement
Holiness movement
The holiness movement refers to a set of beliefs and practices emerging from the Methodist Christian church in the mid 19th century. The movement is distinguished by its emphasis on John Wesley's doctrine of "Christian perfection" - the belief that it is possible to live free of voluntary sin - and...
, Pentecostalism
Pentecostalism
Pentecostalism is a diverse and complex movement within Christianity that places special emphasis on a direct personal experience of God through the baptism in the Holy Spirit, has an eschatological focus, and is an experiential religion. The term Pentecostal is derived from Pentecost, the Greek...
, the Charismatic Movement
Charismatic movement
The term charismatic movement is used in varying senses to describe 20th century developments in various Christian denominations. It describes an ongoing international, cross-denominational/non-denominational Christian movement in which individual, historically mainstream congregations adopt...
, and Neo-charismatic churches
Neo-charismatic churches
Neo-charismatic churches are a category of churches in the Christian Renewal movement. The Christian renewal movement incorporates Pentecostal, Charismatic and neo-charismatic churches...
, which encompass numerous denominations across the world.

Did John Wesley ever speek on self defense.
More

I look on all the world as my parish; thus far I mean, that, in whatever part of it I am, I judge it meet, right, and my bounden duty, to declare unto all that are willing to hear, the glad tidings of salvation.

Every one, though born of God in an instant, yet undoubtedly grows by slow degrees.

The longer I live, the larger allowances I make for human infirmities. I exact more from myself, and less from others. Go thou and do likewise!

Beware you be not swallowed up in books! An ounce of love is worth a pound of knowledge.

Letter to Joseph Benson (7 November 1768); published in The Letters of John Wesley (1915) edited by George Eayrs

Passion and prejudice govern the world; only under the name of reason. It is our part, by religion and reason joined, to counteract them all we can.

In returning I read a very different book, published by an honest Quaker, on that execrable sum of all villanies, commonly called the Slave-trade.

No circumstances can make it necessary for a man to burst in sunder all the ties of humanity.