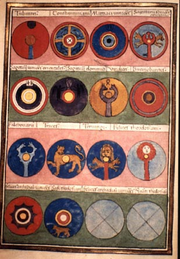 The Notitia Dignitatum is a unique document of the Roman
Ancient Rome
Ancient Rome was a thriving civilization that grew on the Italian Peninsula as early as the 8th century BC. Located along the Mediterranean Sea and centered on the city of Rome, it expanded to one of the largest empires in the ancient world....
imperial chanceries. One of the very few surviving documents of Roman government, it details the administrative organisation of the eastern and western empire
Roman Empire
The Roman Empire was the post-Republican period of the ancient Roman civilization, characterised by an autocratic form of government and large territorial holdings in Europe and around the Mediterranean....
s, listing several thousand offices from the imperial court down to the provincial level. It is usually considered to be up to date for the Western empire
Western Roman Empire
The Western Roman Empire was the western half of the Roman Empire after its division by Diocletian in 285; the other half of the Roman Empire was the Eastern Roman Empire, commonly referred to today as the Byzantine Empire....
in the 420s, and for the Eastern empire in 400s. However, no absolute date can be given, and there are omissions and problems.

There are several extant fifteenth and sixteenth-century copies (plus a color-illuminated 1542 version). All the known and extant copies of this late Roman document are derived, either directly or indirectly, from a codex
Codex
A codex is a book in the format used for modern books, with multiple quires or gatherings typically bound together and given a cover.Developed by the Romans from wooden writing tablets, its gradual replacement...
(Codex Spirensis) that is known to have existed in the library of the cathedral chapter at Speyer
Speyer
Speyer is a city of Rhineland-Palatinate, Germany with approximately 50,000 inhabitants. Located beside the river Rhine, Speyer is 25 km south of Ludwigshafen and Mannheim. Founded by the Romans, it is one of Germany's oldest cities...
in 1542 but which was lost before 1672 and cannot now be located. That book contained a collection of documents (of which the Notitia was the last and largest document, occupying 164 pages) that brought together several previous documents of which one was of the 9th century. The heraldry
Heraldry
Heraldry is the profession, study, or art of creating, granting, and blazoning arms and ruling on questions of rank or protocol, as exercised by an officer of arms. Heraldry comes from Anglo-Norman herald, from the Germanic compound harja-waldaz, "army commander"...
in illuminated manuscripts of Notitiae is thought to copy or imitate no other examples than those from the lost Codex Spirensis. The most important copy of the Codex is that made for Pietro Donato
Pietro Donato
Pietro Donato was a Renaissance humanist and the Bishop of Padua . He was a noted bibliophile, epigraphist, collector, and patron of art....
(1436), illuminated by Peronet Lamy
Peronet Lamy
Peronet Lamy , called Perenet lenlumineur , was a Gothic painter and manuscript illuminator who spent his career in the employ of the House of Savoy....
.

For each half of the empire, the Notitia enumerates all major 'dignities' (i.e. offices) in its gift, often with their location and even their exact officium
Officium
Officium is a Latin word with various meanings in Ancient Rome, including "service", " duty", "courtesy", "ceremony" and the like...
(staff, enumerated except for the most junior). These are organised by:


The most recent editor of Notitia Dignitatum is Robert Ireland, in British Archaeological Reports, International Series 63.2. 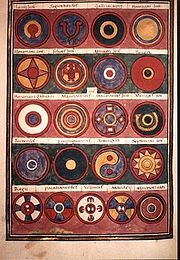 The Notitia presents four main problems, as regards the study of the Empire's military establishment:

The Notitia contains the earliest known depictions of the diagram which later came to be known as yin and yang symbol. The infantry units armigeri defensores seniores ("shield-bearers") and Mauri Osismiaci had a shield design which corresponds to the dynamic, clockwise version of the symbol. The emblem of the Thebaei, another Western Roman infantry regiment, featured a pattern of concentric circles comparable to its static version. The Roman patterns predate the earliest Taoist
Taoism
Taoism refers to a philosophical or religious tradition in which the basic concept is to establish harmony with the Tao , which is the mechanism of everything that exists...
versions by almost seven hundred years.