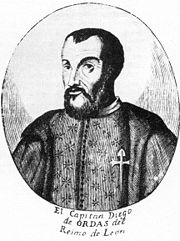 Diego de Ordaz born in Castroverde de Campos
Castroverde de Campos
Castroverde de Campos is a municipality located in the province of Zamora, Castile and León, Spain. According to the 2009 census , the municipality has a population of 364 inhabitants....
, Zamora
Zamora (province)
Zamora is a Spanish province of western Spain, in the western part of the autonomous community of Castile and León.The present-day province of Zamora province was one of three provinces formed from the former Kingdom of León in 1833, when Spain was re-organised into 49 provinces.It is bordered by...
province, Spain
Spain
Spain , officially the Kingdom of Spain languages]] under the European Charter for Regional or Minority Languages. In each of these, Spain's official name is as follows:;;;;;;), is a country and member state of the European Union located in southwestern Europe on the Iberian Peninsula...
, in 1480, died in Venezuela
Venezuela
Venezuela , officially called the Bolivarian Republic of Venezuela , is a tropical country on the northern coast of South America. It borders Colombia to the west, Guyana to the east, and Brazil to the south...
in 1532, was a Spanish explorer and soldier.

Diego de Ordaz arrived in Cuba at a young age. Serving under the orders of Diego de Velázquez, he particpated in the earliest exploratory expeditions to Colombia
Colombia
Colombia, officially the Republic of Colombia , is a unitary constitutional republic comprising thirty-two departments. The country is located in northwestern South America, bordered to the east by Venezuela and Brazil; to the south by Ecuador and Peru; to the north by the Caribbean Sea; to the...
And Panamá
Panama
Panama , officially the Republic of Panama , is the southernmost country of Central America. Situated on the isthmus connecting North and South America, it is bordered by Costa Rica to the northwest, Colombia to the southeast, the Caribbean Sea to the north and the Pacific Ocean to the south. The...
.


Expedition of Cortés to Mexico

De Ordaz accompanied Hernán Cortés
Hernán Cortés
Hernán Cortés de Monroy y Pizarro, 1st Marquis of the Valley of Oaxaca was a Spanish Conquistador who led an expedition that caused the fall of the Aztec Empire and brought large portions of mainland Mexico under the rule of the King of Castile in the early 16th century...
on his expedition of conquest to the Mexican mainland. He was recognized for his contribution to the victory over the Aztecs obtained at the Battle of Centla near Río Grijalva in Tabasco
Tabasco
Tabasco officially Estado Libre y Soberano de Tabasco is one of the 31 states which, with the Federal District, comprise the 32 Federal Entities of Mexico. It is divided in 17 municipalities and its capital city is Villahermosa....
on March 25, 1519.

Together with two comrades, he was the first European to climb to the top of the volcano Popocatépetl
Popocatépetl
Popocatépetl also known as "Popochowa" by the local population is an active volcano and, at , the second highest peak in Mexico after the Pico de Orizaba...
- a feat which made a great impression on the indigenous allies accompanying Cortės. In recognition of De Ordaz's military deeds, the emperor Charles V
Charles V, Holy Roman Emperor
Charles V was ruler of the Holy Roman Empire from 1519 and, as Charles I, of the Spanish Empire from 1516 until his voluntary retirement and abdication in favor of his younger brother Ferdinand I and his son Philip II in 1556.As...
on October 22, 1525 issued a decree permitting him to use a coat-of-arms featuring a view of the volcano.

De Ordaz participated in the Spanish conquest of Tenochtitlán, the Aztec
Aztec
The Aztec people were certain ethnic groups of central Mexico, particularly those groups who spoke the Nahuatl language and who dominated large parts of Mesoamerica in the 14th, 15th and 16th centuries, a period referred to as the late post-classic period in Mesoamerican chronology.Aztec is the...
capital. When prior to the final conquest, the Spaniards were forced to flee from the capital in a nocturnal action known as La Noche Triste
La Noche Triste
La Noche Triste on June 30, 1520, was an important event during the Spanish conquest of Mexico, wherein Hernán Cortés and his army of Spanish conquistadors and native allies fought their way out of the Mexican capital at Tenochtitlan following the death of the Aztec king Montezuma, whom the...
("the sad night"), De Ordaz was wounded.

In 1521, he was sent back to Spain in order to present the story of the conquest of Mexico to the Spanish court, and in order to obtain for Cortės the title of Governor and General Captain of New Spain
New Spain
New Spain, formally called the Viceroyalty of New Spain , was a viceroyalty of the Spanish colonial empire, comprising primarily territories in what was known then as 'América Septentrional' or North America. Its capital was Mexico City, formerly Tenochtitlan, capital of the Aztec Empire...

De Ordaz returned to America in approximately 1525. In 1529, he was granted the property of El Peñón de los Baños located within the limits of Mexico City
Mexico City
Mexico City is the Federal District , capital of Mexico and seat of the federal powers of the Mexican Union. It is a federal entity within Mexico which is not part of any one of the 31 Mexican states but belongs to the federation as a whole...
. He returned again to Spain and requested permission to explore the lands of the mythical El Dorado
El Dorado
El Dorado is the name of a Muisca tribal chief who covered himself with gold dust and, as an initiation rite, dived into a highland lake.Later it became the name of a legendary "Lost City of Gold" that has fascinated – and so far eluded – explorers since the days of the Spanish Conquistadors...
, which was believed to lie inland in the area of what is now Colombia
Colombia
Colombia, officially the Republic of Colombia , is a unitary constitutional republic comprising thirty-two departments. The country is located in northwestern South America, bordered to the east by Venezuela and Brazil; to the south by Ecuador and Peru; to the north by the Caribbean Sea; to the...
and Venezuela
Venezuela
Venezuela , officially called the Bolivarian Republic of Venezuela , is a tropical country on the northern coast of South America. It borders Colombia to the west, Guyana to the east, and Brazil to the south...
. Having obtained the sought permission, he sailed for South America, discovering the Río Orinoco. Having at last abandoned the search for El Dorado, he died in 1532 on the Venezuelan peninsula of Paria, just as he was about to return to Spain.

In 1952, a planned city called Puerto Ordaz
Puerto Ordaz
Puerto Ordaz is a planned city which, together with the older settlement of San Felix, forms Ciudad Guayana in Bolívar State, eastern Venezuela. Puerto Ordaz is located at the confluence of the Caroní and Orinoco Rivers and is the site of the Llovizna Falls. There are bridges across the Caroni and...
was founded in Venezuela on the banks of the Orinoco River; today it is one of that country's principal cities.

Diego de Ordaz was one of the principal characters in the anonymous historical novel Jicoténcal published in Philadelphia in 1826 and attributed to the Spanish writer Félix Mejía
Félix Mejía
Félix Mejía Fernández-Pacheco was a Spanish journalist, also remembered as a novelist, playwright and historian....
.
The source of this article is wikipedia, the free encyclopedia.  The text of this article is licensed under the GFDL.