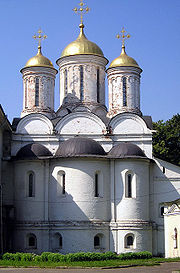 The Diaconicon is, in the Eastern Orthodox
Eastern Orthodox Church
The Orthodox Church, officially called the Orthodox Catholic Church and commonly referred to as the Eastern Orthodox Church, is the second largest Christian denomination in the world, with an estimated 300 million adherents mainly in the countries of Belarus, Bulgaria, Cyprus, Georgia, Greece,...
and Greek-Catholic Churches, the name given to a chamber on the south side of the central apse
Apse
In architecture, the apse is a semicircular recess covered with a hemispherical vault or semi-dome...
of the church, where the vestments, books, etc, that are used in the Divine Services of the church are kept (the sacred vessels are kept in the Prothesis
Prothesis (altar)
The Prothesis is the place in the sanctuary in which the Liturgy of Preparation takes place in the Eastern Orthodox and Greek-Catholic Churches....
, which is on the north side of the sanctuary).

The Diaconicon contains the thalassidion (piscina
Piscina
A piscina is a shallow basin placed near the altar of a church, used for washing the communion vessels. The sacrarium is the drain itself. Anglicans usually refer to the basin, calling it a piscina. Roman Catholics usually refer to the drain, and by extension, the basin, as the sacrarium...
), a sink that drains into an honorable place where liquids such as the water used to wash holy things may be poured, and where the clergy may wash their hands before serving the Divine Liturgy
Divine Liturgy
Divine Liturgy is the common term for the Eucharistic service of the Byzantine tradition of Christian liturgy. As such, it is used in the Eastern Orthodox and Eastern Catholic Churches. Armenian Christians, both of the Armenian Apostolic Church and of the Armenian Catholic Church, use the same term...
. The Diaconicon will usually have cabinets or drawers where the vestments and church hangings (antependia
Antependia
An antependium , more commonly known as a hanging, or, when speaking specifically of the hanging for the altar, an altar frontal , is a decorative piece of material that can adorn a Christian altar, lectern, pulpit, or table...
) may be safely stored. Here will also be kept the reserved charcoal, and a place for heating the zeon
Zeon (liturgy)
Zeon is a liturgical action which takes place in the Divine Liturgy of the Rite of Constantinople, during which hot water is added to the chalice. The same term is used as a noun to describe the vessel used for this purpose....
, (boiling water that is poured into the chalice
Chalice (cup)
A chalice is a goblet or footed cup intended to hold a drink. In general religious terms, it is intended for drinking during a ceremony.-Christian:...
before Communion. Towels and other necessary items will be kept here also.

Only bishop
Bishop
A bishop is an ordained or consecrated member of the Christian clergy who is generally entrusted with a position of authority and oversight. Within the Catholic Church, Eastern Orthodox, Oriental Orthodox Churches, in the Assyrian Church of the East, in the Independent Catholic Churches, and in the...
s or priest
Priest
A priest is a person authorized to perform the sacred rites of a religion, especially as a mediatory agent between humans and deities. They also have the authority or power to administer religious rites; in particular, rites of sacrifice to, and propitiation of, a deity or deities...
s may sit in the sanctuary; however, deacon
Deacon
Deacon is a ministry in the Christian Church that is generally associated with service of some kind, but which varies among theological and denominational traditions...
s and altar servers may sit in the Diaconicon when they are not needed for the service. Because the Diaconicon is located behind the Iconostasis
Iconostasis
In Eastern Christianity an iconostasis is a wall of icons and religious paintings, separating the nave from the sanctuary in a church. Iconostasis also refers to a portable icon stand that can be placed anywhere within a church...
it is considered to be a holy place, and only those who have a specific liturgical duty to perform should go in, and any regulations pertaining to entry into the sanctuary apply here as well.

In the churches in central Syria
Syria
Syria , officially the Syrian Arab Republic , is a country in Western Asia, bordering Lebanon and the Mediterranean Sea to the West, Turkey to the north, Iraq to the east, Jordan to the south, and Israel to the southwest....
of slightly earlier date, the diaconicon is rectangular, the side apses at Kalat-Seman having been added at a later date.

It can also refer to the liturgical book specifying the functions of the deacon.