Encyclopedia
Porta Westfalica is a town in the district of Minden-Lübbecke
Minden-Lübbecke
Minden-Lübbecke is a Kreis in the northeastern part of North Rhine-Westphalia, Germany. Neighboring districts are Diepholz, Nienburg, Schaumburg, Lippe, Herford, Osnabrück.-Geography:...
, in North Rhine-Westphalia
North Rhine-Westphalia
North Rhine-Westphalia is the most populous state of Germany, with four of the country's ten largest cities. The state was formed in 1946 as a merger of the northern Rhineland and Westphalia, both formerly part of Prussia. Its capital is Düsseldorf. The state is currently run by a coalition of the...
, Germany
Germany
Germany , officially the Federal Republic of Germany , is a federal parliamentary republic in Europe. The country consists of 16 states while the capital and largest city is Berlin. Germany covers an area of 357,021 km2 and has a largely temperate seasonal climate...
. The name “Porta Westfalica” is Latin
Latin
Latin is an Italic language originally spoken in Latium and Ancient Rome. It, along with most European languages, is a descendant of the ancient Proto-Indo-European language. Although it is considered a dead language, a number of scholars and members of the Christian clergy speak it fluently, and...
and means “gate to Westphalia
Westphalia
Westphalia is a region in Germany, centred on the cities of Arnsberg, Bielefeld, Dortmund, Minden and Münster.Westphalia is roughly the region between the rivers Rhine and Weser, located north and south of the Ruhr River. No exact definition of borders can be given, because the name "Westphalia"...
”. Coming from the north, the gorge is the entry to the region of Westphalia. Despite the Latin name the term was not coined in Roman
Roman Empire
The Roman Empire was the post-Republican period of the ancient Roman civilization, characterised by an autocratic form of government and large territorial holdings in Europe and around the Mediterranean....
times, but by scholars of the 19th century.

The town Porta Westfalica was established in 1973 by merging fifteen villages surrounding the gorge. The centre of the modern town is the former village of Hausberge, which was first mentioned in 1096.

The town of Porta Westfalica consists of 15 districts: 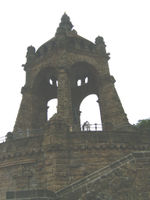