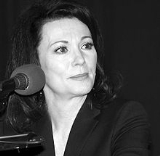 Encyclopedia
Iris Berben is a German
Germany
Germany , officially the Federal Republic of Germany , is a federal parliamentary republic in Europe. The country consists of 16 states while the capital and largest city is Berlin. Germany covers an area of 357,021 km2 and has a largely temperate seasonal climate...
actress. She grew up in Hamburg, where her parents ran a restaurant.

After the Six-day War
Six-Day War
The Six-Day War , also known as the June War, 1967 Arab-Israeli War, or Third Arab-Israeli War, was fought between June 5 and 10, 1967, by Israel and the neighboring states of Egypt , Jordan, and Syria...
in 1967 she travelled to Israel, and afterwards became the partner of the Israeli singer Abi Ofarim
Abi Ofarim
Abi Ofarim is an Israeli musician and dancer.At the age of 12, he attended ballet school, and made his debut on stage in Haifa at 15...
. Since then she has been associated with the pro-Israel lobby and has campaigned against anti-semitism
Anti-Semitism
Antisemitism is suspicion of, hatred toward, or discrimination against Jews for reasons connected to their Jewish heritage. According to a 2005 U.S...
. She had a son, Oliver, in 1971, but never revealed the identity of the father.

In 2010, together with Bruno Ganz
Bruno Ganz
Bruno Ganz is a Swiss actor, known for his roles as Damiel in Wings of Desire and Adolf Hitler in Downfall.- Early life :Bruno Ganz was born in Zürich to a Swiss mechanic father and a northern Italian mother. He had decided to pursue an acting career by the time he entered university...
she was elected president of the German Film Academy.