Encyclopedia
Desecration is the act of depriving something of its sacred character, or the disrespectful or contemptuous treatment of that which is held to be sacred or holy by a group or individual.

Many consider acts of desecration to be sacrilegious
Sacrilege
Sacrilege is the violation or injurious treatment of a sacred object. In a less proper sense, any transgression against the virtue of religion would be a sacrilege. It can come in the form of irreverence to sacred persons, places, and things...
acts. This can include desecration of sacred books, sacred places or sacred objects. Desecration generally may be considered from the perspective of a particular religion or spiritual activity. Desecration may be applied to natural systems or components, particularly if those systems are part of naturalistic spiritual religion.

To respectfully remove the sacred character of a place or an object is deconsecration
Deconsecration
Deconsecration is the act of removing a religious blessing from something that had been previously consecrated by a minister or priest of that religion. The same act when performed by a member of a differing religion may be considered a curse by some religions and not a complete removal of the...
, and is distinct from desecration.


Christianization of the Roman Empire

Examples of the destruction of pagan temples in the late fourth century, as recorded in surviving texts, describe Martin of Tours
Martin of Tours
Martin of Tours was a Bishop of Tours whose shrine became a famous stopping-point for pilgrims on the road to Santiago de Compostela. Around his name much legendary material accrued, and he has become one of the most familiar and recognizable Christian saints...
' attacks on holy sites in Gaul , the destruction of temples in Syria by Marcellus the destruction of temples and images in, and surrounding, Carthage, the Patriarch Theophilus who seized and destroyed pagan temples in Alexandria, the levelling of all the temples in Gaza and the wider destruction of holy sites that spread rapidly throughout Egypt. This is supplemented in abundance by archaeological evidence in the northern provinces exposing broken and burnt out buildings and hastily buried objects of piety. The leader of the Egyptian monks who participated in the sack of temples replied to the victims who demanded back their sacred icons:


"I peacefully removed your gods...there is no such thing as robbery for those who truly possess Christ."


At the turn of the century St Augustine would exhort his congregation in Carthage to smash all tangible symbols of paganism:


"for that all superstition of pagans and heathens should be annihilated is what God wants, God commands, God proclaims!"


In the year 407 a decree was issued to the west from Rome:


"If any images stand even now in the temples and shrines...., they shall be torn from their foundations...The temples situated in cities or towns shall be taken for public use. Altars shall be destroyed in all places." 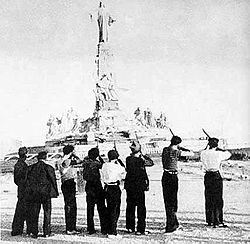 The Red Terror in Spain
Red Terror (Spain)
The Red Terror in Spain is the name given by historians to various acts committed "by sections of nearly all the leftist groups" such as the killing of tens of thousands of people , as well as attacks on landowners, industrialists, and politicians, and the...
during the Spanish Civil War
Spanish Civil War
The Spanish Civil WarAlso known as The Crusade among Nationalists, the Fourth Carlist War among Carlists, and The Rebellion or Uprising among Republicans. was a major conflict fought in Spain from 17 July 1936 to 1 April 1939...
involved massive desecration of churches, synagogues and other sacred objects and places by leftists. On the night of July 19, 1936 alone, 50 churches were burned. In Barcelona, out of the 58 churches, only the Cathedral was spared, and similar events occurred almost everywhere in Republican Spain. All the Catholic churches in the Republican zone were closed, but the attacks were not limited to Catholic churches, as synagogues were also pillaged and closed, but some small Protestant churches were spared.


House of the Báb, Shiraz

The Báb
Báb
Siyyid `Alí Muḥammad Shírází was the founder of Bábism, and one of three central figures of the Bahá'í Faith. He was a merchant from Shíráz, Persia, who at the age of twenty-four claimed to be the promised Qá'im . After his declaration he took the title of Báb meaning "Gate"...
, the prophet-founder of the Babi religion
Bábism
The Babi Faith is a religious movement that flourished in Persia from 1844 to 1852, then lingered on in exile in the Ottoman Empire as well as underground. Its founder was Siyyid `Alí Muhammad Shirazi, who took the title Báb—meaning "Gate"—from a Shi'a theological term...
declared his mission on 23 May 1844 in his house in Shiraz
Shiraz, Iran
Shiraz is the sixth most populous city in Iran and is the capital of Fars Province, the city's 2009 population was 1,455,073. Shiraz is located in the southwest of Iran on the Roodkhaneye Khoshk seasonal river...
, Iran
Iran
Iran , officially the Islamic Republic of Iran , is a country in Southern and Western Asia. The name "Iran" has been in use natively since the Sassanian era and came into use internationally in 1935, before which the country was known to the Western world as Persia...
.

In 1942–3 it was damaged by fire in an attack by enemies of the Bahá'í Faith
Bahá'í Faith
The Bahá'í Faith is a monotheistic religion founded by Bahá'u'lláh in 19th-century Persia, emphasizing the spiritual unity of all humankind. There are an estimated five to six million Bahá'ís around the world in more than 200 countries and territories....
, and in 1955 it was destroyed, but later again restored. In 1979 it was destroyed once more during the Iranian Revolution
Iranian Revolution
The Iranian Revolution refers to events involving the overthrow of Iran's monarchy under Shah Mohammad Reza Pahlavi and its replacement with an Islamic republic under Ayatollah Ruhollah Khomeini, the leader of the...
. In 1981 the site was made into a road and public square. Recently, a mosque dedicated to the 'Promised One' has been built adjacent to the site.

Even in the late 20th and 21st century, desecrations are still taking place in some parts of the world, notably in countries ruled by religious fundamentalists, such as the destruction of the Buddhas of Bamyan
Buddhas of Bamyan
The Buddhas of Bamiyan were two 6th century monumental statues of standing buddhas carved into the side of a cliff in the Bamyan valley in the Hazarajat region of central Afghanistan, situated northwest of Kabul at an altitude of 2,500 meters...
by the Taliban in March 2001. Also, in Europe
Europe
Europe is, by convention, one of the world's seven continents. Comprising the westernmost peninsula of Eurasia, Europe is generally 'divided' from Asia to its east by the watershed divides of the Ural and Caucasus Mountains, the Ural River, the Caspian and Black Seas, and the waterways connecting...
, in disputed region of Kosovo
Kosovo
Kosovo is a region in southeastern Europe. Part of the Ottoman Empire for more than five centuries, later the Autonomous Province of Kosovo and Metohija within Serbia...
, only during violent unrests in 2004
2004 unrest in Kosovo
Violent unrest in Kosovo, which at the time was under United Nations administration, broke out on 17 March 2004. Kosovo Albanians, numbering over 50,000, took part in widescale attacks on the Serbian people, compared by the then Serbian Prime Minister Vojislav Koštunica to ethnic cleansing but not...
, more than 35 Orthodox
Eastern Christianity
Eastern Christianity comprises the Christian traditions and churches that developed in the Balkans, Eastern Europe, Asia Minor, the Middle East, Northeastern Africa, India and parts of the Far East over several centuries of religious antiquity. The term is generally used in Western Christianity to...
churches were desecrated, damaged or destroyed.
The source of this article is wikipedia, the free encyclopedia.  The text of this article is licensed under the GFDL.