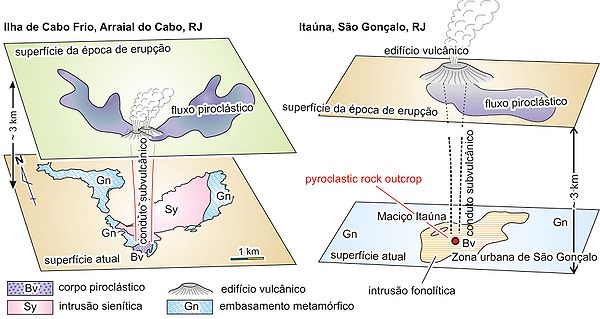 In geology
Geology
Geology is the science comprising the study of solid Earth, the rocks of which it is composed, and the processes by which it evolves. Geology gives insight into the history of the Earth, as it provides the primary evidence for plate tectonics, the evolutionary history of life, and past climates...
, denudation is the long-term sum of processes that cause the wearing away of the earth’s surface leading to a reduction in elevation and relief of landforms and landscapes. Endogenetic processes such as volcanoes, earthquakes, and plate tectonics
Plate tectonics
Plate tectonics is a scientific theory that describes the large scale motions of Earth's lithosphere...
uplift and expose continental crust to the exogenetic denudation processes of weathering
Weathering
Weathering is the breaking down of rocks, soils and minerals as well as artificial materials through contact with the Earth's atmosphere, biota and waters...
, erosion
Erosion
Erosion is when materials are removed from the surface and changed into something else. It only works by hydraulic actions and transport of solids in the natural environment, and leads to the deposition of these materials elsewhere...
, and mass wasting
Mass wasting
Mass wasting, also known as slope movement or mass movement, is the geomorphic process by which soil, regolith, and rock move downslope under the force of gravity. Types of mass wasting include creep, slides, flows, topples, and falls, each with its own characteristic features, and taking place...
.

Denudation incorporates mechanical, biological and chemical processes of erosion, weathering and mass wasting. Denudation can involve the removal of both solid particles and dissolved material. These include sub-processes of cryofracture, insolation weathering, slaking
Slaking (geology)
Slaking is the process in which earth materials disintegrate and crumble when exposed to moisture. The term can be applied to natural geologic formations, land modified by or for human use, or to the use of earth materials in manufacturing or industry....
, salt weathering, bioturbation
Bioturbation
In oceanography, limnology, pedology, geology , and archaeology, bioturbation is the displacement and mixing of sediment particles and solutes by fauna or flora . The mediators of bioturbation are typically annelid worms , bivalves In oceanography, limnology, pedology, geology (especially...
and anthropogenic impacts.

Modern denudation estimates are usually based on stream load
Stream load
Stream load is a geologic term referring to the solid matter carried by a stream . Erosion continually removes mineral material from the bed and banks of the stream channel, adding this material to the regular flow of water. The amount of solid load that a stream can carry, or stream capacity, is...
measurements taken at gauging stations. Suspended load
Suspended load
Suspended load is the portion of the sediment that is carried by a fluid flow which settle slowly enough such that it almost never touches the bed...
, bed load
Bed load
The term bed load or bedload describes particles in a flowing fluid that are transported along the bed. Bed load is complementary to suspended load and wash load.Bed load moves by rolling, sliding, and/or saltating ....
, and dissolved load
Dissolved load
Dissolved load is the term for material, especially ions from chemical weathering, that are carried in solution by a stream. The dissolved load contributes to the total amount of material removed from a catchment. The amount of material carried as dissolved load is typically much smaller than the...
are included in measurements. The weight of the load is converted to volumetric units and the load volume is divided by the area of the watershed above the gaging station. The result is an estimate of the wearing down of the Earth's surface in inches or centimeters per 1000 years. In most cases no adjustments are made for human impact, which causes the measurements to be inflated.

Denudation rates are usually much lower than the rates of uplift. The only areas at which there could be equal rates of denudation and uplift are active plate margins with an extended period of continuous deformation.

Early studies prompted the formation of denudation cycle hypotheses to describe land formations. Although at present they are mostly discounted, many of these models are enduring due to their simplicity and seemingly obvious assumptions.

In the 1890s W. M. Davis
William Morris Davis
William Morris Davis was an American geographer, geologist, geomorphologist, and meteorologist, often called the "father of American geography"....
proposed a cycle of 'wearing down' in which so called 'young' landscapes had high gradients and elevations, and waning, low elevation topography through middle age to old age. Landscapes of Britain and Wales were thought to reflect these multiple peneplanation
Peneplain
A peneplain is a low-relief plain representing the final stage of fluvial erosion during times of extended tectonic stability. The existence of peneplains, and peneplanation as a geomorphological process, is not without controversy, due to a lack of contemporary examples and uncertainty in...
and rejuvenation cycles, such as the 3,000-foot remnant summit plateau in North Wales. A number of assumptions of fluvial and glacial dynamics in temperate areas were made in the formation of this model.

Such theories were proposed before tectonic theory was largely understood, and therefore are now largely discredited.

Denudation exposes deep sub-volcanic
Volcano
2. Bedrock3. Conduit 4. Base5. Sill6. Dike7. Layers of ash emitted by the volcano8. Flank| 9. Layers of lava emitted by the volcano10. Throat11. Parasitic cone12. Lava flow13. Vent14. Crater15...
structures on the present surface of the area where volcanic activity once occurred. Sub-volcanic structures such as neck
Neck
The neck is the part of the body, on many terrestrial or secondarily aquatic vertebrates, that distinguishes the head from the torso or trunk. The adjective signifying "of the neck" is cervical .-Boner anatomy: The cervical spine:The cervical portion of the human spine comprises seven boney...
and dyke
Dike (geology)
A dike or dyke in geology is a type of sheet intrusion referring to any geologic body that cuts discordantly across* planar wall rock structures, such as bedding or foliation...
(volcanic vent) are exposed by denudation.

In medicine, denudation refers to the loss of surface layers, such as the epithelium
Epithelium
Epithelium is one of the four basic types of animal tissue, along with connective tissue, muscle tissue and nervous tissue. Epithelial tissues line the cavities and surfaces of structures throughout the body, and also form many glands. Functions of epithelial cells include secretion, selective...
.
The source of this article is wikipedia, the free encyclopedia.  The text of this article is licensed under the GFDL.