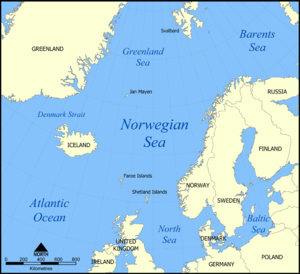 The Denmark Strait or Greenland Strait ' onMouseout='HidePop("47993")' href="/topics/Greenland">Greenland
Greenland
Greenland is an autonomous country within the Kingdom of Denmark, located between the Arctic and Atlantic Oceans, east of the Canadian Arctic Archipelago. Though physiographically a part of the continent of North America, Greenland has been politically and culturally associated with Europe for...
Sound
Sound (geography)
In geography a sound or seaway is a large sea or ocean inlet larger than a bay, deeper than a bight and wider than a fjord; or it may be defined as a narrow sea or ocean channel between two bodies of land ....
) is an oceanic strait
Strait
A strait or straits is a narrow, typically navigable channel of water that connects two larger, navigable bodies of water. It most commonly refers to a channel of water that lies between two land masses, but it may also refer to a navigable channel through a body of water that is otherwise not...
between Greenland (to its northwest) and Iceland
Iceland
Iceland , described as the Republic of Iceland, is a Nordic and European island country in the North Atlantic Ocean, on the Mid-Atlantic Ridge. Iceland also refers to the main island of the country, which contains almost all the population and almost all the land area. The country has a population...
(to its southeast). The Norwegian
Norway
Norway , officially the Kingdom of Norway, is a Nordic unitary constitutional monarchy whose territory comprises the western portion of the Scandinavian Peninsula, Jan Mayen, and the Arctic archipelago of Svalbard and Bouvet Island. Norway has a total area of and a population of about 4.9 million...
island of Jan Mayen
Jan Mayen
Jan Mayen Island is a volcanic island in the Arctic Ocean and part of the Kingdom of Norway. It is long and 373 km2 in area, partly covered by glaciers . It has two parts: larger northeast Nord-Jan and smaller Sør-Jan, linked by an isthmus wide...
lies northeast of the strait.

It connects the Greenland Sea
Greenland Sea
The Greenland Sea is a body of water that borders Greenland to the west, the Svalbard archipelago to the east, Fram Strait and the Arctic Ocean to the north, and the Norwegian Sea and Iceland to the south. The Greenland Sea is often defined as part of the Arctic Ocean, sometimes as part of the...
, an extension of the Arctic Ocean
Arctic Ocean
The Arctic Ocean, located in the Northern Hemisphere and mostly in the Arctic north polar region, is the smallest and shallowest of the world's five major oceanic divisions...
, to the Irminger Sea
Irminger Sea
The Irminger Sea is a marginal sea of the North Atlantic Ocean. It is 480 km long and 290 km wide at its narrowest. The northern limit is the Greeland-Iceland Rise on the bottom of Denmark Strait between Iceland and East Greenland, which connects to Greenland Sea. To the southwest, it reaches to...
, a part of the Atlantic Ocean
Atlantic Ocean
The Atlantic Ocean is the second-largest of the world's oceanic divisions. With a total area of about , it covers approximately 20% of the Earth's surface and about 26% of its water surface area...
, and is 300 miles (480 km) long and 180 miles (289 km) wide at its narrowest, from Straumnes, the northwestern headland
Headland
A headland is a point of land, usually high and often with a sheer drop, that extends out into a body of water.Headland can also refer to:*Headlands and bays*headLand, an Australian television series...
of the north west Icelandic peninsula
Peninsula
A peninsula is a piece of land that is bordered by water on three sides but connected to mainland. In many Germanic and Celtic languages and also in Baltic, Slavic and Hungarian, peninsulas are called "half-islands"....
of Hornstrandir
Hornstrandir
Hornstrandir is Iceland's northernmost peninsula, situated in the Westfjords, to the north of the Jökulfirðir and to the northwest of Drangajökull....
, und Cape Tupinier on Blosseville Coast in East Greenland
Tunu
Tunu/Østgrønland was one of the three counties of Greenland, until 31 December 2008. The county seat was at the main settlement, Tasiilaq...
). The official IHO
International Hydrographic Organization
The International Hydrographic Organization is the inter-governmental organisation representing the hydrographic community. It enjoys observer status at the UN and is the recognised competent authority on hydrographic surveying and nautical charting...
delineation between the Arctic and the North Atlantic Oceans, however, runs from Straumness to Cape Nansen, which is 132 km southwest of Cape Tunipier. From Straumnes to Cape Nansen the distance is 336 km. 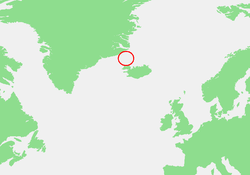 During World War II
World War II
World War II, or the Second World War , was a global conflict lasting from 1939 to 1945, involving most of the world's nations—including all of the great powers—eventually forming two opposing military alliances: the Allies and the Axis...
, the Battle of the Denmark Strait
Battle of the Denmark Strait
The Battle of the Denmark Strait was a Second World War naval battle between ships of the Royal Navy and the German Kriegsmarine, fought on 24 May 1941...
took place on May 24, 1941. The German battleship Bismarck
German battleship Bismarck
Bismarck was the first of two s built for the German Kriegsmarine during World War II. Named after Chancellor Otto von Bismarck, the primary force behind the German unification in 1871, the ship was laid down at the Blohm & Voss shipyard in Hamburg in July 1936 and launched nearly three years later...
sank the British battlecruiser HMS Hood
HMS Hood (51)
HMS Hood was the last battlecruiser built for the Royal Navy. One of four s ordered in mid-1916, her design—although drastically revised after the Battle of Jutland and improved while she was under construction—still had serious limitations. For this reason she was the only ship of her class to be...
, which exploded with the loss of all but three of its 1418 crew, and seriously damaged the British battleship Prince of Wales
HMS Prince of Wales (1939)
HMS Prince of Wales was a King George V-class battleship of the Royal Navy, built at the Cammell Laird shipyard in Birkenhead, England...
. Bismarck succeeded in entering the Atlantic through the Strait, but damage sustained in the battle prevented it from carrying out its intended destruction of British convoys.