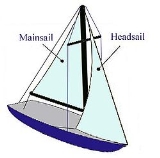 Overview
A sailboat or sailing boat is a boat
Boat
A boat is a watercraft of any size designed to float or plane, to provide passage across water. Usually this water will be inland or in protected coastal areas. However, boats such as the whaleboat were designed to be operated from a ship in an offshore environment. In naval terms, a boat is a...
propelled partly or entirely by sail
Sail
A sail is any type of surface intended to move a vessel, vehicle or rotor by being placed in a wind—in essence a propulsion wing. Sails are used in sailing.-History of sails:...
s. The term covers a variety of boats, larger than small vessels such as sailboards and smaller than sailing ship
Sailing ship
The term sailing ship is now used to refer to any large wind-powered vessel. In technical terms, a ship was a sailing vessel with a specific rig of at least three masts, square rigged on all of them, making the sailing adjective redundant. In popular usage "ship" became associated with all large...
s, but distinctions in the size are not strictly defined and what constitutes a sailing
Sailing
Sailing is the propulsion of a vehicle and the control of its movement with large foils called sails. By changing the rigging, rudder, and sometimes the keel or centre board, a sailor manages the force of the wind on the sails in order to move the boat relative to its surrounding medium and...
ship, sailboat, or a smaller vessel (such as a sailboard) varies by region and culture.
Each part of a sailboat has a special name.

What if your sailboat sails the wrong way?
More
x