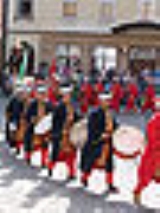 Encyclopedia
The davul or tupan is a large double-headed drum
Drum
The drum is a member of the percussion group of musical instruments, which is technically classified as the membranophones. Drums consist of at least one membrane, called a drumhead or drum skin, that is stretched over a shell and struck, either directly with the player's hands, or with a...
that is played with sticks. It has many names depending on the country and region.

Some names of davuls include:

These drums are commonly used in the folk music of Iran
Iran
Iran , officially the Islamic Republic of Iran , is a country in Southern and Western Asia. The name "Iran" has been in use natively since the Sassanian era and came into use internationally in 1935, before which the country was known to the Western world as Persia...
and Turkey
Turkey
Turkey , known officially as the Republic of Turkey , is a Eurasian country located in Western Asia and in East Thrace in Southeastern Europe...
, as well as Romania
Romania
Romania is a country located at the crossroads of Central and Southeastern Europe, on the Lower Danube, within and outside the Carpathian arch, bordering on the Black Sea...
, Bulgaria
Music of Bulgaria
The music of Bulgaria refers to all forms of music associated with Bulgaria like classical, folk, popular music, etc. Bulgarian music is part of the Balkan tradition, which stretches across Southeastern Europe, and has its own distinctive sound...
and the Republic of Macedonia
Music of the Republic of Macedonia
Music of the Republic of Macedonia and the Macedonians has many things in common with the music of neighbouring Balkan countries, but maintains its own distinctive sound.-Folk music:...
, portions of Greece
Greece
Greece , officially the Hellenic Republic , and historically Hellas or the Republic of Greece in English, is a country in southeastern Europe....
and Serbia
Serbia
Serbia , officially the Republic of Serbia , is a landlocked country located at the crossroads of Central and Southeast Europe, covering the southern part of the Carpathian basin and the central part of the Balkans...
, as well as Iraq
Iraq
Iraq ; officially the Republic of Iraq is a country in Western Asia spanning most of the northwestern end of the Zagros mountain range, the eastern part of the Syrian Desert and the northern part of the Arabian Desert....
and Armenia
Armenia
Armenia , officially the Republic of Armenia , is a landlocked mountainous country in the Caucasus region of Eurasia...
. These drums have both a deep bass sound and a thin treble sound due to their construction and playing style, where different heads and sticks are used to produce different sounds on the same drum.

In Armenia the dhol is not as long and is played with the hands and not with a stick. It is frequently heard in Armenian folk music due to its origins from Armenia. Not only is it in folk music but also in modern music as well, even having solos in many prominent songs.

Other Greek names for this drum include Davouli, Argano, Toskani, Tsokani, Toubi, Toubaki, Kiossi, Tavouli, Pavouli, Toubano, and Toubaneli. Additionally, other names for the daouli, depending on the area, include toumpano, tymbano, or toumbi, which stem from the ancient Greek word tympano; this word exists in English in the word tympani for the drum section in the modern classical orchestra and the tympanic membrane for the eardrum
Eardrum
The eardrum, or tympanic membrane, is a thin membrane that separates the external ear from the middle ear in humans and other tetrapods. Its function is to transmit sound from the air to the ossicles inside the middle ear. The malleus bone bridges the gap between the eardrum and the other ossicles...
.

In Arabic
Arabic language
Arabic is a name applied to the descendants of the Classical Arabic language of the 6th century AD, used most prominently in the Quran, the Islamic Holy Book...
-speaking countries, the tabl is associated with the dabke
Dabke
Dabke is an Arab folk dance. It is popular in several Arab countries such as Palestine, Lebanon, Jordan, Syria,and Iraq. A line dance, it is widely performed at weddings and joyous occasions...
, a folkloric line dance
Line dance
A line dance is a choreographed dance with a repeated sequence of steps in which a group of people dance in one or more lines or rows without regard for the gender of the individuals, all facing the same direction, and executing the steps at the same time. Line dancers are not in physical contact...
of the Levant
Levant
The Levant or ) is the geographic region and culture zone of the "eastern Mediterranean littoral between Anatolia and Egypt" . The Levant includes most of modern Lebanon, Syria, Jordan, Israel, the Palestinian territories, and sometimes parts of Turkey and Iraq, and corresponds roughly to the...
, Saudi Arabia
Saudi Arabia
The Kingdom of Saudi Arabia , commonly known in British English as Saudi Arabia and in Arabic as as-Sa‘ūdiyyah , is the largest state in Western Asia by land area, constituting the bulk of the Arabian Peninsula, and the second-largest in the Arab World...
, and the cane dance of Upper Egypt
Upper Egypt
Upper Egypt is the strip of land, on both sides of the Nile valley, that extends from the cataract boundaries of modern-day Aswan north to the area between El-Ayait and Zawyet Dahshur . The northern section of Upper Egypt, between El-Ayait and Sohag is sometimes known as Middle Egypt...
. It is accompanied by the mizmar
Mizmar
In Arabic music, a mizmar is any single or double reed wind instrument. In Egypt, the term mizmar usually refers to the conical shawm that is called zurna in Turkey....
, mijwiz
Mijwiz
The mijwiz is a traditional musical instrument of Jordan, Syria and the Druze. Its name in Arabic means "dual," or "married" because of its consisting of two, short, bamboo reed pipes put together, making the mijwiz a double-pipe, single-reed woodwind instrument...
, or minjayra, a smaller mountain version of the reed flute, or nay
Ney
The ney is an end-blown flute that figures prominently in Middle Eastern music. In some of these musical traditions, it is the only wind instrument used. It is a very ancient instrument, with depictions of ney players appearing in wall paintings in the Egyptian pyramids and actual neys being found...
.

In Turkey and Armenia, the davul is most commonly played with the zurna
Zurna
The zurna , is a multinational outdoor wind instrument, usually accompanied by a davul in Anatolian folk music. The name is from Turkish zurna, itself derived from Persian سرنای surnāy, composed of sūr “banquet, feast” and nāy “reed, pipe”...
, although it can be played with other instruments and in ensembles as well. It has also traditionally been used for communication and for Turkish mehter, or janissary
Janissary
The Janissaries were infantry units that formed the Ottoman sultan's household troops and bodyguards...
music.

The drum shell is made of hard wood, perhaps walnut or chestnut, though many woods may be in use depending on the region where the drum is made. To make the shell, the wood is boiled in water to make it bendable, and then it is bent into a cylindrical shape and fastened together. The heads
Drumhead
A drumhead is a membrane stretched over one or both of the open ends of a drum. The drumhead is struck with sticks, mallets, or hands so that it vibrates and the sound resonates through the drum.-History:...
are usually goat skin, and they are shaped into circles by wooden frames. However, one head may be goat skin to provide a higher tone, while the other head can be sheepskin, calfskin, or even donkey-skin to provide a lower tone. Some say that wolf skin and even dog skin are preferred. Rope threaded back and forth across the shell of the drum, from head to head in a zigzag pattern, holds the heads on the drum and provides tension for tuning the drum. Sometimes metal rings or leather straps join neighboring strands of the rope in order to allow for further tuning. Two rings are sometimes attached to the main rope where a belt-like rope is threaded through to hold the drum.

In Turkey, davuls typically range in size from 60 cm to 90 cm in diameter. Cow hide is used for the bass pitch drum head side, while goat skin is used for the thin, high pitched side.

Players often use a rope hooked to the drum to hold the drum sideways, so that one head is accessible with the left hand and one with the right. Each hand is usually dedicated to playing one side of the drum exclusively, though this can vary by local style and tradition.

Drummers of this drum typically uses two kinds of sticks. The drummer plays the accented beats with the dominant hand on the side of the drum with the thicker skin, using a special stick known as the , , or (daouli stick). This stick is a thick pipe-like stick about 440 mm long, which is often made with walnut. Its thick shape as well as the thickness of the head give the accented beats a low, full sound. Sometimes the drumhead played with the thick stick is also muted with a cloth to enhance the fundamental low note of the drum. Unaccented beats are played by the nondominant hand on the side of the drum having the thin skin, using a thin stick or switch called , , or (daouli switch). This thin stick is often held cross-grip, and the drummer can quickly hit thin accent strokes by gently twisting the wrist. These thin sticks are often made from soft wood such as willow or cornel
European Cornel
The European Cornel is a species of dogwood native to southern Europe and southwest Asia. In North America, the plant is known by the common name of Cornelian Cherry....
.

The Balkan school of tapan playing presumes the playing (not the accompaniment) of a melody, where the non-dominant hand is used to express all that the player wishes to say, while the dominant hand is only used to accentuate certain moments in the melody.

The Australian-Macedonian drummer Chris Mitrevski pioneered a hybrid style of playing, relying on multiple accented notes played by the non-dominant hand. This style is difficult to play but results in a very complex poly-rhythm, with the dominant hand acccenting the down beat.