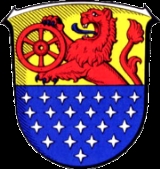 Encyclopedia
Darmstadt-Dieburg is a Kreis (district
District
Districts are a type of administrative division, in some countries managed by a local government. They vary greatly in size, spanning entire regions or counties, several municipalities, or subdivisions of municipalities.-Austria:...
) in the south of Hesse
Hesse
Hesse or Hessia is both a cultural region of Germany and the name of an individual German state.* The cultural region of Hesse includes both the State of Hesse and the area known as Rhenish Hesse in the neighbouring Rhineland-Palatinate state...
, Germany
Germany
Germany , officially the Federal Republic of Germany , is a federal parliamentary republic in Europe. The country consists of 16 states while the capital and largest city is Berlin. Germany covers an area of 357,021 km2 and has a largely temperate seasonal climate...
. Neighboring districts are Offenbach
Offenbach (district)
Offenbach is a Kreis in the south of Hesse, Germany and is part of the Frankfurt/Rhine-Main Metropolitan Region. Neighbourhood districts are Main-Kinzig, Aschaffenburg, Darmstadt-Dieburg, Groß-Gerau and the cities of Darmstadt, Frankfurt and Offenbach.-History:The district Offenbach was first...
, Aschaffenburg
Aschaffenburg (district)
Aschaffenburg is a district in Bavaria, Germany. It is bounded by the districts of Darmstadt-Dieburg, Offenbach, Main-Kinzig , the districts Main-Spessart and Miltenberg, and the town of Aschaffenburg....
, Miltenberg
Miltenberg (district)
Miltenberg is an administrative district in Bavaria, Germany. It is bounded by the city of Aschaffenburg, the districts of Aschaffenburg and Main-Spessart, and the states of Baden-Württemberg and Hesse .-History:During the Middle Ages there was continuous...
, Odenwaldkreis
Odenwaldkreis
The Odenwaldkreis is a Kreis in the south of Hesse, Germany. Neighboring districts are Darmstadt-Dieburg, Miltenberg,Neckar-Odenwald-Kreis, Rhein-Neckar-Kreis and Kreis Bergstraße. Odenwaldkreis belongs to the Rhine Neckar Area.-History:...
, Bergstraße, Groß-Gerau
Groß-Gerau (district)
Groß-Gerau is a Kreis in the south of Hesse , Germany. Neighboring districts are Main-Taunus, district-free Frankfurt, Darmstadt-Dieburg, Bergstraße, Alzey-Worms, Mainz-Bingen, and the district-free cities Mainz and Wiesbaden....
, and the district-free city of Darmstadt
Darmstadt
Darmstadt is a city in the Bundesland of Hesse in Germany, located in the southern part of the Rhine Main Area.The sandy soils in the Darmstadt area, ill-suited for agriculture in times before industrial fertilisation, prevented any larger settlement from developing, until the city became the seat...
, which it surrounds.

The district was created in 1975 by merging the previous districts of Darmstadt and Dieburg. In 1964 the district was twinned with the district of North East Derbyshire
North East Derbyshire
North East Derbyshire is a local government district in Derbyshire, England. It borders the districts of Chesterfield, Bolsover, Amber Valley and Derbyshire Dales in Derbyshire, and Sheffield and Rotherham in South Yorkshire....
, England, in 1990 with the district Zwickauer Land
Zwickauer Land
Zwickauer Land is a former Kreis in the south-west of the Free State of Saxony, Germany. Neighboring districts were Chemnitzer Land, Stollberg, Aue-Schwarzenberg, Vogtlandkreis, and the districts Greiz and Altenburger Land in Thuringia...
in Saxony
Saxony
The Free State of Saxony is a landlocked state of Germany, contingent with Brandenburg, Saxony Anhalt, Thuringia, Bavaria, the Czech Republic and Poland. It is the tenth-largest German state in area, with of Germany's sixteen states....
, Germany, and in 1995 with the Mladá Boleslav
Mladá Boleslav
Mladá Boleslav is a city in the Central Bohemian Region of the Czech Republic, on the left bank of the Jizera river about 50 km northeast of Prague.Founded in the second half of the 10th century by King Boleslav II as a royal castle...
region in the Czech Republic
Czech Republic
The Czech Republic is a landlocked country in Central Europe. The country is bordered by Poland to the northeast, Slovakia to the east, Austria to the south, and Germany to the west and northwest....
.

The district is located in the Odenwald
Odenwald
The Odenwald is a low mountain range in Hesse, Bavaria and Baden-Württemberg in Germany.- Location :The Odenwald lies between the Upper Rhine Rift Valley with the Bergstraße and the Hessisches Ried in the west, the Main and the Bauland in the east, the Hanau-Seligenstadt Basin – a subbasin of...
mountains. Most famous in the district is the Messel Pit
Messel pit
The Messel Pit is a disused quarry near the village of Messel, about southeast of Frankfurt am Main, Germany. Bituminous shale was mined there. Because of its abundance of fossils, it has significant geological and scientific importance...
, where many fossil
Fossil
Fossils are the preserved remains or traces of animals , plants, and other organisms from the remote past...
s in the oil shale
Shale
Shale is a fine-grained, clastic sedimentary rock composed of mud that is a mix of flakes of clay minerals and tiny fragments of other minerals, especially quartz and calcite. The ratio of clay to other minerals is variable. Shale is characterized by breaks along thin laminae or parallel layering...
of a Tertiary
Tertiary
The Tertiary is a deprecated term for a geologic period 65 million to 2.6 million years ago. The Tertiary covered the time span between the superseded Secondary period and the Quaternary...
lake were found. The site is listed in the UNESCO
UNESCO
The United Nations Educational, Scientific and Cultural Organization is a specialized agency of the United Nations...
world heritage list since 1995.