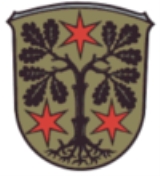 Encyclopedia
The Odenwaldkreis is a Kreis (district
District
Districts are a type of administrative division, in some countries managed by a local government. They vary greatly in size, spanning entire regions or counties, several municipalities, or subdivisions of municipalities.-Austria:...
) in the south of Hesse
Hesse
Hesse or Hessia is both a cultural region of Germany and the name of an individual German state.* The cultural region of Hesse includes both the State of Hesse and the area known as Rhenish Hesse in the neighbouring Rhineland-Palatinate state...
, Germany
Germany
Germany , officially the Federal Republic of Germany , is a federal parliamentary republic in Europe. The country consists of 16 states while the capital and largest city is Berlin. Germany covers an area of 357,021 km2 and has a largely temperate seasonal climate...
. Neighboring districts are Darmstadt-Dieburg
Darmstadt-Dieburg
Darmstadt-Dieburg is a Kreis in the south of Hesse, Germany. Neighboring districts are Offenbach, Aschaffenburg, Miltenberg, Odenwaldkreis, Bergstraße, Groß-Gerau, and the district-free city of Darmstadt, which it surrounds.-History:...
, Miltenberg
Miltenberg (district)
Miltenberg is an administrative district in Bavaria, Germany. It is bounded by the city of Aschaffenburg, the districts of Aschaffenburg and Main-Spessart, and the states of Baden-Württemberg and Hesse .-History:During the Middle Ages there was continuous...
,
Neckar-Odenwald-Kreis
Neckar-Odenwald-Kreis
Neckar-Odenwald-Kreis is a district in the north of Baden-Württemberg, Germany. Neighboring districts are Main-Tauber-Kreis, Hohenlohe, Heilbronn, Rhein-Neckar-Kreis, Odenwaldkreis Hesse and Landkreis Miltenberg Bavaria...
, Rhein-Neckar-Kreis
Rhein-Neckar-Kreis
Rhein-Neckar-Kreis is a district in the northwest of Baden-Württemberg, Germany. Neighboring districts are Bergstraße, Odenwaldkreis, Neckar-Odenwald, Heilbronn, Karlsruhe, district-free Speyer, the Rhein-Pfalz-Kreis, and district-free Mannheim and Heidelberg.-History:The district was created in...
and Kreis Bergstraße
Kreis Bergstraße
Bergstraße is a Kreis in the south of Hesse, Germany. Neighboring districts are Groß-Gerau, Darmstadt-Dieburg, Odenwaldkreis, Rhein-Neckar-Kreis, the urban district Mannheim, the Rhein-Pfalz-Kreis, and the urban district of Worms...
. Odenwaldkreis belongs to the Rhine Neckar Area
Rhine Neckar Area
The Rhine-Neckar Metropolitan Region , often referred to as Rhein-Neckar-Triangle is a polycentric metropolitan region located in south western Germany, between the Frankfurt/Rhine-Main region to the North and the Stuttgart Region to the South-East.Rhine-Neckar has a population of some 2.4 million...
.

As the name of the district already suggests it is located in the Odenwald
Odenwald
The Odenwald is a low mountain range in Hesse, Bavaria and Baden-Württemberg in Germany.- Location :The Odenwald lies between the Upper Rhine Rift Valley with the Bergstraße and the Hessisches Ried in the west, the Main and the Bauland in the east, the Hanau-Seligenstadt Basin – a subbasin of...
mountains.