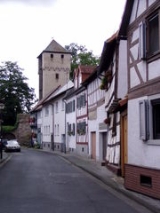 Encyclopedia
Babenhausen is a town in the Darmstadt-Dieburg
Darmstadt-Dieburg
Darmstadt-Dieburg is a Kreis in the south of Hesse, Germany. Neighboring districts are Offenbach, Aschaffenburg, Miltenberg, Odenwaldkreis, Bergstraße, Groß-Gerau, and the district-free city of Darmstadt, which it surrounds.-History:...
district, in Hesse
Hesse
Hesse or Hessia is both a cultural region of Germany and the name of an individual German state.* The cultural region of Hesse includes both the State of Hesse and the area known as Rhenish Hesse in the neighbouring Rhineland-Palatinate state...
, Germany
Germany
Germany , officially the Federal Republic of Germany , is a federal parliamentary republic in Europe. The country consists of 16 states while the capital and largest city is Berlin. Germany covers an area of 357,021 km2 and has a largely temperate seasonal climate...
.

It is situated on the river Gersprenz
Gersprenz
Gersprenz is a river of Bavaria, Germany.-See also:*List of rivers of Bavaria...
, 25 km southeast of Frankfurt
Frankfurt
Frankfurt am Main , commonly known simply as Frankfurt, is the largest city in the German state of Hesse and the fifth-largest city in Germany, with a 2010 population of 688,249. The urban area had an estimated population of 2,300,000 in 2010...
, and 14 km west of Aschaffenburg
Aschaffenburg
Aschaffenburg is a city in northwest Bavaria, Germany. The town of Aschaffenburg is not considered part of the district of Aschaffenburg, but is the administrative seat.Aschaffenburg is known as the Tor zum Spessart or "gate to the Spessart"...
. South of its general borders, the mountain range of the Odenwald
Odenwald
The Odenwald is a low mountain range in Hesse, Bavaria and Baden-Württemberg in Germany.- Location :The Odenwald lies between the Upper Rhine Rift Valley with the Bergstraße and the Hessisches Ried in the west, the Main and the Bauland in the east, the Hanau-Seligenstadt Basin – a subbasin of...
is situated about 15 km away. The landscape is rather flat due to the landscape forming process of the Gersprenz and other small rivers. Some sections along the Gersprenz are set aside as nature reserves with valuable plants and animals, e.g. the white stork
White Stork
The White Stork is a large bird in the stork family Ciconiidae. Its plumage is mainly white, with black on its wings. Adults have long red legs and long pointed red beaks, and measure on average from beak tip to end of tail, with a wingspan...
or the kingfisher
Kingfisher
Kingfishers are a group of small to medium sized brightly coloured birds in the order Coraciiformes. They have a cosmopolitan distribution, with most species being found in the Old World and Australia...
. The forests in the municipal area are mostly pine woods on ice-age dunes with heath fields. The sandy soil is regionally famous for growing white Asparagus
Asparagus
Asparagus officinalis is a spring vegetable, a flowering perennialplant species in the genus Asparagus. It was once classified in the lily family, like its Allium cousins, onions and garlic, but the Liliaceae have been split and the onion-like plants are now in the family Amaryllidaceae and...
(Spargel in German).

The town of Babenhausen includes a medieval core with a castle (12-13th century), numerous old houses and a large part of the city wall (1445). Babenhausen was chartered as a town in 1295. It belonged first to the Lords of Hagen-Münzenberg and was – after the last male descendant of this family died - inherited by the Lords of Hanau
Hanau
Hanau is a town in the Main-Kinzig-Kreis, in Hesse, Germany. It is located 25 km east of Frankfurt am Main. Its station is a major railway junction.- Geography :...
in the 13th century. In 1458 a minor line of them (first called Hanau-Babenhausen, later called Hanau-Lichtenberg ) founded an county (they had received the title of Graf [Earl] in 1429) on its own within the town and its district. In 1736 the last of the family died and the two potential inheritors, the Landgrave of Hesse-Darmstadt
Landgraviate of Hesse-Darmstadt
The Landgraviate of Hesse-Darmstadt was a member state of the Holy Roman Empire. It was formed in 1567 following the division of the Landgraviate of Hesse between the four sons of Philip I, the last Landgrave of Hesse....
and the Landgrave of Hesse-Kassel
Hesse-Kassel
The Landgraviate of Hesse-Kassel or Hesse-Cassel was a state in the Holy Roman Empire under Imperial immediacy that came into existence when the Landgraviate of Hesse was divided in 1567 upon the death of Philip I, Landgrave of Hesse. His eldest son William IV inherited the northern half and the...
(or Hesse-Cassel) nearly went into a war over this inheritance. It took 35 years to settle the conflict and to arrange a compromise under which the town of Babenhausen came to Hesse-Kassel. But this was soon revised by the territorial rearrangements during and after Napoleonic times: From the beginning 19th century Babenhausen belonged to Hesse-Darmstadt.
In the aftermath of World War II
World War II
World War II, or the Second World War , was a global conflict lasting from 1939 to 1945, involving most of the world's nations—including all of the great powers—eventually forming two opposing military alliances: the Allies and the Axis...
Babenhausen was the site of a UNRRA-sponsored DP camp
Displaced persons camp
A displaced persons camp or DP camp is a temporary facility for displaced persons coerced into forced migration. The term is mainly used for camps established after World War II in West Germany and in Austria, as well as in the United Kingdom, primarily for refugees from Eastern Europe and for the...
.

After the revision of districts and their borders in the state of Hesse in 1974 the following villages were added to the area of the town of Babenhausen.

The US military installation in Babenhausen, Babenhausen Kaserne, formerly home of the 41st Field Artillery Brigade (United States), was closed and returned to the control of the German government in 2007.
The source of this article is wikipedia, the free encyclopedia.  The text of this article is licensed under the GFDL.