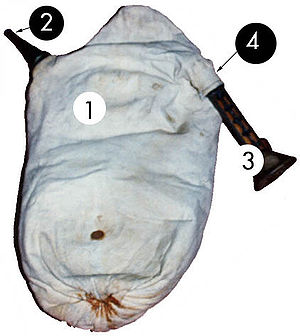 Dankiyo is an ancient word from the text of Evliya Çelebi
Evliya Çelebi
Evliya Çelebi was an Ottoman traveler who journeyed through the territory of the Ottoman Empire and neighboring lands over a period of forty years.- Life :...
(17th century, Ottoman
Ottoman Empire
The Ottoman EmpireIt was usually referred to as the "Ottoman Empire", the "Turkish Empire", the "Ottoman Caliphate" or more commonly "Turkey" by its contemporaries...
Era "The Laz
Laz people
The Laz are an ethnic group native to the Black Sea coastal regions of Turkey and Georgia...
's of Trebizond invented a bagpipe called a dankiyo..." describing the Pontian
Pontian
Pontian may refer to:* Pontian, in stratigraphy the uppermost Miocene Paratethys stage, coeval with the Messinian* Pontian Greeks, a group of ethnic Greek who inhabited northern Turkey* Pontian Islands, a group of islands on the coast of Italy...
tulum
Tulum (bagpipe)
The tulum is a musical instrument, a form of bagpipe from Turkey. It is droneless with two parallel chanters, usually played by the Laz, Hamsheni people, and Pontic Greeks...
, a type of bagpipe which the ancient Greeks called an askaulos (ἀσκός askos – wine-skin, αὐλός aulos – flute). It consists of a lamb skin, a blow pipe, and the double reed chanter
Chanter
The chanter is the part of the bagpipe upon which the player creates the melody. It consists of a number of finger-holes, and in its simpler forms looks similar to a recorder...
.

The dankiyo is played in small villages near Trabzon
Trabzon
Trabzon is a city on the Black Sea coast of north-eastern Turkey and the capital of Trabzon Province. Trabzon, located on the historical Silk Road, became a melting pot of religions, languages and culture for centuries and a trade gateway to Iran in the southeast and the Caucasus to the northeast...
and Rize
Rize
Rize is the capital of Rize Province, in northeast Turkey, on the Black Sea coast.-Etymology:The name comes from Greek or Ριζαίον , meaning "mountain slopes". In modern times, its name in Greek was usually Ριζούντα . Its Latin forms are Rhizus and Rhizaeum...
. A similar type of bagpipe possessing less holes can be found on the islands of Greece. Its use is also widespread in the prefecture of Macedonia in Northern Greece amongst Pontian Greek
Greeks
The Greeks, also known as the Hellenes , are a nation and ethnic group native to Greece, Cyprus and neighboring regions. They also form a significant diaspora, with Greek communities established around the world....
populations. What differentiates the dankiyo from other bagpipes is that the dankiyo does not use a separate pipe for the drone. Instead, the sound is created by two reeds in the chanter.


Parts of the instrument