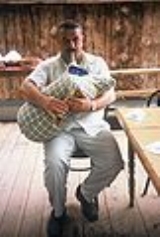 The tulum
Laz language
The Laz language is a South Caucasian language spoken by the Laz people on the Southeast shore of the Black Sea...
is a musical instrument
Musical instrument
A musical instrument is a device created or adapted for the purpose of making musical sounds. In principle, any object that produces sound can serve as a musical instrument—it is through purpose that the object becomes a musical instrument. The history of musical instruments dates back to the...
, a form of bagpipe from Turkey
Turkey
Turkey , known officially as the Republic of Turkey , is a Eurasian country located in Western Asia and in East Thrace in Southeastern Europe...
. It is droneless with two parallel chanters, usually played by the Laz
Laz people
The Laz are an ethnic group native to the Black Sea coastal regions of Turkey and Georgia...
, Hamsheni
Hamshenis
The Hemshin Peoples or Hemshinli are a diverse group of people who in the past history or present have been affiliated with the Hemşin district in the province of Rize, Turkey. They are called as Hemshinli , Hamshenis, Homshentsi meaning resident of Hemshin in the relevant language...
people, and Pontic Greeks
Pontic Greeks
The Pontians are an ethnic group traditionally living in the Pontus region, the shores of Turkey's Black Sea...
(particularly Chaldians). It is a prominent instrument in the music of Pazar
Pazar
Pazar is a town and district of Rize Province in the Black Sea region of Turkey, 37 km east of the city of Rize.-Etymology:The town was formerly named Atina and was renamed Pazar 'market' in 1928.-Geography:...
, Hemşin
Hemsin
Hemşin is a town and district of Rize Province in the Black Sea region of Turkey, 57 km from the city of Rize....
, Çamlıhemşin
Çamlihemsin
Çamlıhemşin is a small town and district of Rize Province in the Black Sea region of Turkey.With its mountains and valleys in all shades of green Çamlıhemşin has a reputation as one of the most attractive parts of the eastern Black Sea region, particularly with the autumn foliage.-Etymology:The...
, Ardeşen
Ardesen
Ardeşen is a town and district of Rize Province in the Black Sea region of Turkey, 48 km along the coast road from the city of Rize.-History:...
, Fındıklı
Findikli
Fındıklı is a town and district of Rize Province on the Black Sea coast of Turkey, east of the city of Rize.-Etymology:The town was formerly known as Vitze which means twig or branch in the Laz language and was renamed Fındıklı after the hazelnuts that were grown here, .-Geography:Like most Black...
, Arhavi
Arhavi
Arhavi is a town and district of Artvin Province in the mountains above the Black Sea coast in the east of Turkey.Arhavi is away from Hopa, away from Fındıklı, away from Artvin, away from Rize....
, Hopa
Hopa
Hopa is a city and district of Artvin Province in northeast Turkey. It is located on the eastern Turkish Black Sea coast about from the city of Artvin and 18 kilometres from the border with Georgia.-Geography:...
, partly in other districts of Artvin
Artvin
-History:See Artvin Province for the history of the region.-Places of interest:* Artvin or Livana castle, built in 937There are a number of Ottoman Empire houses and public buildings including:* Salih Bey mosque, built in 1792...
and in the villages of the Tatos range (the watershed between the provinces of Rize
Rize Province
Rize Province is a province of north-east Turkey, on the eastern Black Sea coast between Trabzon and Artvin. Its capital is the city of Rize.-Geography:...
and Trabzon
Trabzon Province
Trabzon Province is a province of Turkey on the Black Sea coast. Located in a strategically important region, Trabzon is one of the oldest trade port cities in Anatolia. Neighbouring provinces are Giresun to the west, Gümüşhane to the southwest, Bayburt to the southeast and Rize to the east. The...
) of İspir
İspir
İspir is a town and district of Erzurum Province in the Eastern Anatolia region of Turkey, on the Çoruh River. The mayor is Osman Çakır . The district has a population of 30260 while the town has a population of 11789.-History:...
. Tulum is the instrument of the transhumant population of the north-eastern provinces of Anatolia
Anatolia
Anatolia is a geographic and historical term denoting the westernmost protrusion of Asia, comprising the majority of the Republic of Turkey...
and, like the kemençe
Kemence
Kemence is a village in Pest county, Hungary....
its area, its imposes its style on the whole of the dance and entertainment music of those for whom it is "our music".

Turkish
Turkish language
Turkish is a language spoken as a native language by over 83 million people worldwide, making it the most commonly spoken of the Turkic languages. Its speakers are located predominantly in Turkey and Northern Cyprus with smaller groups in Iraq, Greece, Bulgaria, the Republic of Macedonia, Kosovo,...
tulum "a skin container" from Khakas
Khakas language
Khakas is a Turkic language spoken by the Khakas people, who mainly live in the southern Siberian Khakas Republic, or Khakassia, in Russia...
.