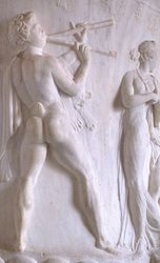 Overview
An aulos or tibia (Latin
Latin
Latin is an Italic language originally spoken in Latium and Ancient Rome. It, along with most European languages, is a descendant of the ancient Proto-Indo-European language. Although it is considered a dead language, a number of scholars and members of the Christian clergy speak it fluently, and...
) was an ancient Greek wind instrument
Wind instrument
A wind instrument is a musical instrument that contains some type of resonator , in which a column of air is set into vibration by the player blowing into a mouthpiece set at the end of the resonator. The pitch of the vibration is determined by the length of the tube and by manual modifications of...
, depicted often in art
Greek art
Greek art began in the Cycladic and Minoan prehistorical civilization, and gave birth to Western classical art in the ancient period...
and also attested by archaeology
Classical archaeology
Classical archaeology is the archaeological investigation of the great Mediterranean civilizations of Ancient Greece and Ancient Rome. Nineteenth century archaeologists such as Heinrich Schliemann were drawn to study the societies they had read about in Latin and Greek texts...
.

An aulete was the musician who performed on an aulos. The ancient Roman equivalent was the tibicen (plural tibicines), from the Latin tibia, "pipe, aulos." The neologism aulode is sometimes used by analogy with rhapsode
Rhapsode
A rhapsode or, in modern usage, rhapsodist, refers to a classical Greek professional performer of epic poetry in the fifth and fourth centuries BC . Rhapsodes notably performed the epics of Homer but also the wisdom and catalogue poetry of Hesiod and the satires of Archilochus and others...
and citharode (citharede) to refer to an aulos player, who may also be called an aulist.
There were several kinds of auloi.