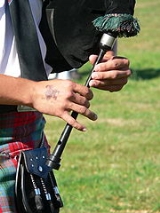 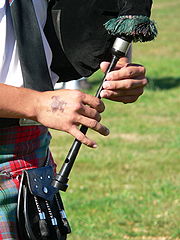 The chanter is the part of the bagpipe upon which the player creates the melody
Melody
A melody , also tune, voice, or line, is a linear succession of musical tones which is perceived as a single entity...
. It consists of a number of finger-holes, and in its simpler forms looks similar to a recorder. On more elaborate bagpipes, such as the Northumbrian bagpipes
Northumbrian smallpipes
The Northumbrian smallpipes are bellows-blown bagpipes from the North East of England.In a survey of the bagpipes in the Pitt Rivers Museum, Oxford University, the organologist Anthony Baines wrote: It is perhaps the most civilized of the bagpipes, making no attempt to go farther than the...
or the Uilleann pipes
Uilleann pipes
The uilleann pipes or //; ) are the characteristic national bagpipe of Ireland, their current name, earlier known in English as "union pipes", is a part translation of the Irish-language term píobaí uilleann , from their method of inflation.The bag of the uilleann pipes is inflated by means of a...
, it also may have a number of keys, to increase the instrument's range and/or the number of keys (in the modal sense) it can play in. Like the rest of the bagpipe, they are often decorated with a variety of substances, including metal (silver/nickel/gold/brass), bone, ivory, or plastic mountings.

Chanters come in two main types, parallel and non-parallel bored (although there is no clear dividing line between the two).
This refers to the shape of the internal bore of the chanter.
On the Great Highland Bagpipe
Great Highland Bagpipe
The Great Highland Bagpipe is a type of bagpipe native to Scotland. It has achieved widespread recognition through its usage in the British military and in pipe bands throughout the world. It is closely related to the Great Irish Warpipes....
, the internal bore is conical: it is this that gives the chanter its exceptional volume.
The Northumbrian pipes, on the other hand, have a parallel bore, giving them a much sweeter and quieter tone.

Although the majority of chanters are unkeyed, some make extensive use of keys to extend the range and/or the number of accidentals
Accidental (music)
In music, an accidental is a note whose pitch is not a member of a scale or mode indicated by the most recently applied key signature. In musical notation, the symbols used to mark such notes, sharps , flats , and naturals , may also be called accidentals...
the chanter can play. The most common pipe featuring this arrangement is the Northumbrian smallpipe.

Another variant of the chanter is the two-piped chanter (often called a double chanter). The chanter pipes may be designed to be played separately, one with each hand, or the two chanters may be played in unison (as in most Arabic bagpipes). One chanter may provide a drone accompaniment to the other, or the two chanters may play in a harmony of thirds and sixths (as in the southern Italian zampogna
Zampogna
Zampogna is a generic term for a number of Italian double chantered pipes that can be found as far north as the southern part of the Marche, throughout areas in Abruzzo, Latium, Molise, Basilicata, Campania, Calabria, and Sicily...
). In pipes of the Carpathian basin up to five separate chanter bores may be placed in parallel within a single chanter assembly, providing both melodic and rhythmic possibilities: in the simplest case, one pipe is used to play the melody while the second provides a variable drone, while more complex pipes may separate certain individual notes into separate, stopped pipes.

Because of the accompanying drone or drones, the lack of modulation in bagpipe melody, and stable timbre of the reed sound, in many bagpipe traditions the tones of the chanter are tuned using just intonation
Just intonation
In music, just intonation is any musical tuning in which the frequencies of notes are related by ratios of small whole numbers. Any interval tuned in this way is called a just interval. The two notes in any just interval are members of the same harmonic series...
, although bagpipe tuning is highly variable across traditions. On the Great Highland bagpipe, tuning of the individual notes of the chanter is done using tape to slightly cover the finger holes as needed. Historically, it was done with wax, as was done with other woodwind instruments.

The practice chanter of today may also be a descendant of the hornpipe
Hornpipe (musical instrument)
The hornpipe can refer to a specific instrument or a class of woodwind instruments consisting of a single reed, a small diameter melody pipe with finger holes and a bell traditionally made from animal horn...
or "stock-and-horn", a historical reed pipe of Scotland with a capped double reed and bell made of horn, played by shepherds, among others.