Encyclopedia
Daniele Manin (13 May 1804 – 22 September 1857) was an Italian
Italy
Italy , officially the Italian Republic languages]] under the European Charter for Regional or Minority Languages. In each of these, Italy's official name is as follows:;;;;;;;;), is a unitary parliamentary republic in South-Central Europe. To the north it borders France, Switzerland, Austria and...
patriot
Patriotism
Patriotism is a devotion to one's country, excluding differences caused by the dependencies of the term's meaning upon context, geography and philosophy...
and statesman
Statesman
A statesman is usually a politician or other notable public figure who has had a long and respected career in politics or government at the national and international level. As a term of respect, it is usually left to supporters or commentators to use the term...
from Venice. He is a hero of Italian unification
Italian unification
Italian unification was the political and social movement that agglomerated different states of the Italian peninsula into the single state of Italy in the 19th century...
(Risorgimento).

Daniele Manin was born from Pietro e Anna Maria Bellotto in Ramo Astori, Venice, where his birth is commemorated by a plaque. Manin family had a Jewish
Judaism
Judaism ) is the "religion, philosophy, and way of life" of the Jewish people...
origin: Daniele's grandfather was Samuele Medina, from Verona
Verona
Verona ; German Bern, Dietrichsbern or Welschbern) is a city in the Veneto, northern Italy, with approx. 265,000 inhabitants and one of the seven chef-lieus of the region. It is the second largest city municipality in the region and the third of North-Eastern Italy. The metropolitan area of Verona...
, who converted to Christianity in 1759 and took the name of Manin because Lodovico Manin stood sponsor to him. He studied law at Padua, and then practised at the bar of Venice, his native city. A man of great learning and a profound jurist, he was inspired from an early age with a deep hatred for Austria.

The heroic but hopeless attempt of the Bandiera Brothers
Bandiera Brothers
The Bandiera Brothers were Italian patriots, Attilio and Emilio Bandiera, .-Background:...
, Venetians who had served in the Austrian navy against the Neapolitan Bourbons in 1844, was the first event to cause an awakening of Venetian patriotism. In 1847 Manin presented a petition to the Venetian congregation, a shadowy consultative assembly tolerated by Austria but without any power, informing the emperor of the wants of the nation. He was arrested on a charge of high treason (18 January 1848), but this only served to increase the agitation of the Venetians, who were beginning to appreciate Manin.
Two months later, when all Italy and half the rest of Europe were in the throes of revolution, the people forced Count Pallfy (Erdődy Pállfy Alajos gróf), the Austrian governor, to release him (17 March). The Austrians soon lost all control of the city: the arsenal was seized by the revolutionists and, under the direction of Manin, a civic guard and a provisional government were instituted. The Austrians evacuated Venice on 26 March and Manin became president of the re-created Republic of San Marco
Republic of San Marco
The Republic of San Marco was an Italian revolutionary state existing for 17 months in 1848–49. Based on the Venetian Lagoon, it extended into most of Venetia, or the Terraferma territory of the Venetian Republic, suppressed 51 years before in the French Revolutionary Wars...
. He was already in favour of Italian unity, and though not anxious for annexation to Piedmont
Kingdom of Sardinia
The Kingdom of Sardinia consisted of the island of Sardinia first as a part of the Crown of Aragon and subsequently the Spanish Empire , and second as a part of the composite state of the House of Savoy . Its capital was originally Cagliari, in the south of the island, and later Turin, on the...
(he would have preferred to invoke French aid), he gave way to the will of the majority, and resigned his powers to the Piedmontese commissioners on 7 August. But after the Piedmontese defeat at Custoza
Battle of Custoza (1848)
The Battle of Custoza was fought on July 24 and 25 1848 during the first Italian War of Independence between the armies of the Austrian Empire, led by Field Marshal Radetzky, and of the Kingdom of Sardinia, led by King Charles Albert of Piedmont....
, and the armistice by which King Charles Albert
Charles Albert of Sardinia
Charles Albert was the King of Piedmont-Sardinia from 1831 to 1849. He succeeded his distant cousin Charles Felix, and his name is bound with the first Italian statute and the First War of Independence...
abandoned Lombardy and Venetia to Austria, the Venetians attempted to lynch
Lynching
Lynching is an extrajudicial execution carried out by a mob, often by hanging, but also by burning at the stake or shooting, in order to punish an alleged transgressor, or to intimidate, control, or otherwise manipulate a population of people. It is related to other means of social control that...
the royal commissioners, whose lives Manin saved with difficulty; an assembly was summoned, and a triumvirate
Triumvirate
A triumvirate is a political regime dominated by three powerful individuals, each a triumvir . The arrangement can be formal or informal, and though the three are usually equal on paper, in reality this is rarely the case...
formed with Manin at its head.

Towards the end of 1848 the Austrians, having been heavily reinforced, reoccupied all the Venetian mainland. The citizens, however, hard-pressed and threatened with a siege, showed the greatest devotion to the cause of freedom, all sharing in the dangers and hardships and giving what they could afford to the state treasury. Early in 1849 Manin was again chosen president of the Republic, and conducted the defence of the city with great ability.

After the defeat of Charles Albert's troops at Novara
Battle of Novara (1849)
The Battle of Novara or Battle of Bicocca was one of the battles fought between the Austrian Empire and the Kingdom of Sardinia during the First Italian War of Independence, within the era of Italian unification...
in March, the Venetian assembly voted "Resistance at all costs!" and granted Manin unlimited powers. 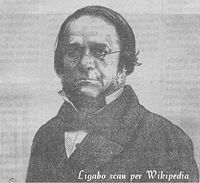 Meanwhile the Austrian forces closed round the city. Manin showed a good capability of organization, in which he was ably seconded by the Neapolitan general, Guglielmo Pepe
Guglielmo Pepe
Guglielmo Pepe was an Italian general and patriot. He was brother to Florestano Pepe and cousin to Gabriele Pepe. He married to Marianne Coventry, a Scottish woman.-Biography:Pepe was born at Squillace in Calabria....
, who led the Neapolitan army to defend Venice against his king's order. But on 26 May the Venetians were forced to abandon Fort Marghera
Marghera
Marghera is a frazione of the comune of Venice, Italy. It includes the industrial area known as Porto Marghera or Venezia Porto Marghera....
, half-way between the city and the mainland; food was becoming scarce, on 19 June the powder magazine blew up, and in July cholera broke out. The Austrian batteries, subsequently, began to bombard Venice itself, and when the Sardinian fleet withdrew from the Adriatic the city was also attacked by sea, while demagogues caused internal trouble.

At last, on 24 August 1849, when all provisions and ammunition were exhausted, Manin, who had courted death in vain, succeeded in negotiating an honorable capitulation, on terms of amnesty to all save Manin himself, Pepe and some others, who were to go into exile. On 27 August Manin left Venice forever on board a French ship.

His wife died at Marseille
Marseille
Marseille , known in antiquity as Massalia , is the second largest city in France, after Paris, with a population of 852,395 within its administrative limits on a land area of . The urban area of Marseille extends beyond the city limits with a population of over 1,420,000 on an area of...
, and he himself reached Paris
Paris
Paris is the capital and largest city in France, situated on the river Seine, in northern France, at the heart of the Île-de-France region...
broken in health and almost destitute, having spent all his fortune for Venice.

In Paris he maintained himself by teaching and became a leader among the Italian exiles. There he became a convert from republicanism to monarchism, being convinced that only under the auspices of King Victor Emmanuel could Italy be freed, and together with Giorgio Pallavicini and Giuseppe La Farina
Giuseppe La Farina
Giuseppe La Farina was an influential leader of the Italian Risorgimento.Minister of Cavour, was highly involved in Garibaldi's departure for Sicily. Ostensibly sent by Cavour to dissuade Garibaldi from going, he in fact did little of the sort...
he founded the Società Nazionale Italiana with the object of propagating the idea of unity under the Piedmontese monarchy.

His last years were embittered by the terrible sufferings of his daughter, who died in 1854. He died on 22 September 1857, and was buried in Ary Scheffer
Ary Scheffer
Ary Scheffer , French painter of Dutch and German extraction, was born in Dordrecht.-Life:After the early death of his father Johann Baptist, a poor painter, Ary's mother Cornelia, herself a painter and daughter of landscapist Arie Lamme, took him to Paris and placed him in the studio of...
's family tomb.

In 1868, two years after the Austrians finally departed from Venice, his remains were brought to his native city and honoured with a public funeral.

Manin was a man of the greatest honesty, and possessed genuinely statesmanlike qualities. He believed in Italian unity when most men, even Cavour, regarded it as a vain thing. For example, during the 1856 Congress of Paris, Manin met with Cavour to discuss the unification of Italy. After the meeting, Cavour wrote that Manin had talked about "l'unità d'Italia ed altre corbellerie" ("the unity of Italy and other nonsense"). Manin's work of propaganda by means of the Italian National Society greatly contributed to the success of the cause.