Encyclopedia
The DShK 1938 is a Soviet
Soviet Union
The Soviet Union , officially the Union of Soviet Socialist Republics , was a constitutionally socialist state that existed in Eurasia between 1922 and 1991....
heavy machine gun
Heavy machine gun
The heavy machine gun or HMG is a larger class of machine gun generally recognized to refer to two separate stages of machine gun development. The term was originally used to refer to the early generation of machine guns which came into widespread use in World War I...
firing the 12.7x108mm cartridge. The weapon was also used as a heavy infantry
Infantry
Infantrymen are soldiers who are specifically trained for the role of fighting on foot to engage the enemy face to face and have historically borne the brunt of the casualties of combat in wars. As the oldest branch of combat arms, they are the backbone of armies...
machine gun, in which case it was frequently deployed with a two-wheeled mounting and a single-sheet armour-plate shield. It took its name from the weapons designers Vasily Degtyaryov, who designed the original weapon, and Georgi Shpagin
Georgi Shpagin
Georgy Semyonovich Shpagin was a Russian weapons designer. He is best known as the creator of the famous PPSh-41 submachine gun.-Early life:...
, who improved the cartridge feed mechanism. It is sometimes nicknamed Dushka (lit. "Sweetie", "Dear"), from the abbreviation.

The requirement for a heavy machine gun appeared in 1929. The first such gun, the Degtyaryov, Krupnokalibernyi (DK, Degtyaryov, Large calibre), was built in 1930 and this gun was produced in small quantities from 1933 to 1935.

The gun was fed from a drum magazine of only thirty rounds, and had a poor rate of fire. Shpagin developed a belt feed mechanism to fit to the DK giving rise, in 1938, to the adoption of the gun as the DShK 1938. This became the standard Soviet heavy machine gun in World War II
World War II
World War II, or the Second World War , was a global conflict lasting from 1939 to 1945, involving most of the world's nations—including all of the great powers—eventually forming two opposing military alliances: the Allies and the Axis...
.

Like its U.S. equivalent, the M2 Browning, the DShK 1938 was used in several roles. As an anti-aircraft weapon it was mounted on pintle and tripod mounts, and on a triple mount on the GAZ-AA truck. Late in the war, it was mounted on the cupolas of IS-2 tanks and ISU-152
ISU-152
ISU-152 was a Soviet multirole fully enclosed and armored self-propelled gun developed and used during World War II, with a subsequent use, mainly in the Soviet military, till the 1970s.-History:...
self-propelled guns. As an infantry heavy support weapon it used a two-wheeled trolley, similar to that developed by Sokolov for the 1910 Maxim gun
Russian M1910 Maxim
The PM M1910 was a heavy machine gun used by the Russian Army during World War I and the Red Army during World War II. It was adopted in 1910 and was derived from Hiram Maxim's Maxim gun, chambered for the standard Russian 7.62x54mmR rifle cartridge...
. It was also mounted in vehicle turrets, for example, in the T-40
T-40
-External links:* on Battlefield.ru...
light amphibious tank.

In addition to the Soviet Union
Soviet Union
The Soviet Union , officially the Union of Soviet Socialist Republics , was a constitutionally socialist state that existed in Eurasia between 1922 and 1991....
and Russia
Russia
Russia or , officially known as both Russia and the Russian Federation , is a country in northern Eurasia. It is a federal semi-presidential republic, comprising 83 federal subjects...
, the DShK has been manufactured under license by a number of countries, including the People's Republic of China
People's Republic of China
China , officially the People's Republic of China , is the most populous country in the world, with over 1.3 billion citizens. Located in East Asia, the country covers approximately 9.6 million square kilometres...
, Pakistan
Pakistan
Pakistan , officially the Islamic Republic of Pakistan is a sovereign state in South Asia. It has a coastline along the Arabian Sea and the Gulf of Oman in the south and is bordered by Afghanistan and Iran in the west, India in the east and China in the far northeast. In the north, Tajikistan...
and Romania
Romania
Romania is a country located at the crossroads of Central and Southeastern Europe, on the Lower Danube, within and outside the Carpathian arch, bordering on the Black Sea...
. Today, it has largely been phased out in favour of the more modern NSV and Kord
Kord machine gun
The Kord-12.7 mm heavy machine gun is a Russian design that entered service in 1998 replacing the older NSV machine gun. Externally the weapon resembles the NSV, however the internal mechanism has been extensively reworked, changing from a horizontally pivoting breech block to a rotating bolt...
designs.

In June 1988, during the conflict in Northern Ireland
Northern Ireland
Northern Ireland is one of the four countries of the United Kingdom. Situated in the north-east of the island of Ireland, it shares a border with the Republic of Ireland to the south and west...
known as the Troubles
The Troubles
The Troubles was a period of ethno-political conflict in Northern Ireland which spilled over at various times into England, the Republic of Ireland, and mainland Europe. The duration of the Troubles is conventionally dated from the late 1960s and considered by many to have ended with the Belfast...
, a British Army
British Army
The British Army is the land warfare branch of Her Majesty's Armed Forces in the United Kingdom. It came into being with the unification of the Kingdom of England and Scotland into the Kingdom of Great Britain in 1707. The new British Army incorporated Regiments that had already existed in England...
Westland Lynx
Westland Lynx
The Westland Lynx is a British multi-purpose military helicopter designed and built by Westland Helicopters at its factory in Yeovil. Originally intended as a utility craft for both civil and naval usage, military interest led to the development of both battlefield and naval variants...
helicopter was hit 15 times and forced to crash-land near Cashel Lough Upper, south County Armagh
County Armagh
-History:Ancient Armagh was the territory of the Ulaid before the fourth century AD. It was ruled by the Red Branch, whose capital was Emain Macha near Armagh. The site, and subsequently the city, were named after the goddess Macha...
by two Provisional IRA
Provisional Irish Republican Army
The Provisional Irish Republican Army is an Irish republican paramilitary organisation whose aim was to remove Northern Ireland from the United Kingdom and bring about a socialist republic within a united Ireland by force of arms and political persuasion...
DShK's smuggled in from Libya. They were also used in 2004, against British troops in Al-Amarah, Iraq
Iraq
Iraq ; officially the Republic of Iraq is a country in Western Asia spanning most of the northwestern end of the Zagros mountain range, the eastern part of the Syrian Desert and the northern part of the Arabian Desert....
. 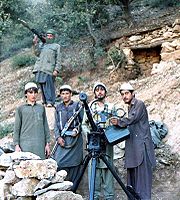