Encyclopedia
The PM M1910 was a heavy machine gun
Heavy machine gun
The heavy machine gun or HMG is a larger class of machine gun generally recognized to refer to two separate stages of machine gun development. The term was originally used to refer to the early generation of machine guns which came into widespread use in World War I...
used by the Russian Army
Military history of Imperial Russia
The Military history of the Russian Empire encompasses the history of armed conflict in which the Empire participated. This history stretches from its creation in 1721 by Peter the Great, until the Russian Revolution , which led to the establishment of the Soviet Union...
during World War I
World War I
World War I , which was predominantly called the World War or the Great War from its occurrence until 1939, and the First World War or World War I thereafter, was a major war centred in Europe that began on 28 July 1914 and lasted until 11 November 1918...
and the Red Army
Red Army
The Workers' and Peasants' Red Army started out as the Soviet Union's revolutionary communist combat groups during the Russian Civil War of 1918-1922. It grew into the national army of the Soviet Union. By the 1930s the Red Army was among the largest armies in history.The "Red Army" name refers to...
during World War II
World War II
World War II, or the Second World War , was a global conflict lasting from 1939 to 1945, involving most of the world's nations—including all of the great powers—eventually forming two opposing military alliances: the Allies and the Axis...
. It was adopted in 1910 and was derived from Hiram Maxim's Maxim gun
Maxim gun
The Maxim gun was the first self-powered machine gun, invented by the American-born British inventor Sir Hiram Maxim in 1884. It has been called "the weapon most associated with [British] imperial conquest".-Functionality:...
, chambered for the standard Russian 7.62x54mmR rifle cartridge. The M1910 was mounted on a cumbersome wheeled mount with a gun shield and was replaced in Soviet service by the SG-43 Goryunov, starting in 1943. In addition to the main infantry version, there were aircraft mounted (PV-1
PV-1 machine gun
PV-1 is an air-cooled version of the Maxim machine gun for mounting on aircraft....
) and naval variants. 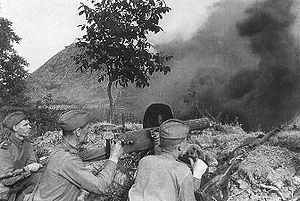 / White Movement
White movement
The White movement and its military arm the White Army - known as the White Guard or the Whites - was a loose confederation of Anti-Communist forces.The movement comprised one of the politico-military Russian forces who fought...
/ Soviet Russia
Russian Soviet Federative Socialist Republic
The Russian Soviet Federative Socialist Republic , commonly referred to as Soviet Russia, Bolshevik Russia, or simply Russia, was the largest, most populous and economically developed republic in the former Soviet Union....
1910-1934 Hungary
People's Republic of Hungary
The People's Republic of Hungary or Hungarian People's Republic was the official state name of Hungary from 1949 to 1989 during its Communist period under the guidance of the Soviet Union. The state remained in existence until 1989 when opposition forces consolidated in forcing the regime to...