Encyclopedia
The DAX is a blue chip stock market index
Stock market index
A stock market index is a method of measuring a section of the stock market. Many indices are cited by news or financial services firms and are used as benchmarks, to measure the performance of portfolios such as mutual funds....
consisting of the 30 major German
Germany
Germany , officially the Federal Republic of Germany , is a federal parliamentary republic in Europe. The country consists of 16 states while the capital and largest city is Berlin. Germany covers an area of 357,021 km2 and has a largely temperate seasonal climate...
companies trading on the Frankfurt Stock Exchange
Frankfurt Stock Exchange
The Frankfurt Stock Exchange is the world's 12th largest stock exchange by market capitalization. Located in Frankfurt am Main, Germany, the Frankfurt Stock Exchange is owned and operated by Deutsche Börse, which also owns the European futures exchange Eurex and the clearing company...
. Prices are taken from the electronic Xetra
Xetra (trading system)
Xetra is a worldwide electronic securities trading system based in Frankfurt, Germany. It was created for the Frankfurt Stock Exchange and launched in November, 1997. It is operated by Deutsche Börse....
trading system. According to Deutsche Börse
Deutsche Börse
Deutsche Börse AG is a marketplace organizer for the trading of shares and other securities. It also is a transaction services provider. It gives companies and investors access to global capital markets. It is a joint stock company and was founded in 1993. The headquarters are in Frankfurt,...
, the operator of Xetra, DAX measures the performance of the Prime Standard
Prime Standard
Prime Standard is a market segment of the Frankfurt Stock Exchange that lists German companies which comply with international transparency standards. The requirements are higher than in General Standard which is regulated by law...
’s 30 largest German companies in terms of order book volume and market capitalization.

The L-DAX Index is an indicator of the German benchmark DAX index's performance after the Xetra electronic-trading system closes based on the floor trading
Floor trading
Floor trading is where traders or stock brokers meet at a specific venue referred to as a trading floor or pit to buy and sell financial instruments using open outcry method to communicate which each other. These venues are typically stock exchanges or futures exchanges and transactions are...
at the Frankfurt Stock Exchange. The L-DAX Index basis is the "floor" trade (Parketthandel) at the Frankfurt stock exchange; it is computed daily between 09:00 and 17:30 Hours CET. The L-DAX index (Late DAX) is calculated from 17:30 to 20:00 CET. The Eurex
Eurex
Eurex is one of the world's leading derivatives exchanges, providing European benchmark derivatives featuring open and low-cost electronic access globally...
, a European electronic futures and options exchange based in Zurich
Zürich
Zurich is the largest city in Switzerland and the capital of the canton of Zurich. It is located in central Switzerland at the northwestern tip of Lake Zurich...
, Switzerland
Switzerland
Switzerland name of one of the Swiss cantons. ; ; ; or ), in its full name the Swiss Confederation , is a federal republic consisting of 26 cantons, with Bern as the seat of the federal authorities. The country is situated in Western Europe,Or Central Europe depending on the definition....
with a subsidiary in Frankfurt
Frankfurt
Frankfurt am Main , commonly known simply as Frankfurt, is the largest city in the German state of Hesse and the fifth-largest city in Germany, with a 2010 population of 688,249. The urban area had an estimated population of 2,300,000 in 2010...
, Germany, offers options (ODAX) and Futures (FDAX) on the DAX from 08:00 to 22:00 CET.

A list of the current DAX companies, as of the quarterly review effective on 21 June 2010 where Salzgitter
Salzgitter AG
Salzgitter AG is a German company, one of the largest steel producers in Europe with an annual output of around 7 million tonnes.The company was founded in 1937 as Reichswerke Hermann Göring,...
was replaced by HeidelbergCement
HeidelbergCement
HeidelbergCement is a German cement and building materials company. It is currently the world's third largest cement producer, the market leader in aggregates and fourth in ready-mix concrete. In 2010 the company produced around 78 million tonnes of cement...
. The index was left unchanged at the September and December 2010, March, June and September 2011 reviews. 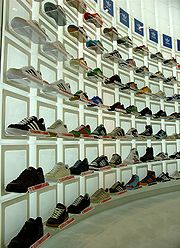 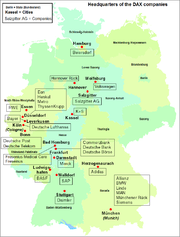 : Weightings accurate prior to quarterly rebalancing of 20 December 2010. Source: DAX Composition 20.10.2010, Deutsche Börse
Deutsche Börse
Deutsche Börse AG is a marketplace organizer for the trading of shares and other securities. It also is a transaction services provider. It gives companies and investors access to global capital markets. It is a joint stock company and was founded in 1993. The headquarters are in Frankfurt,...
.

Following table lists the former components of DAX and the ones replaced them.