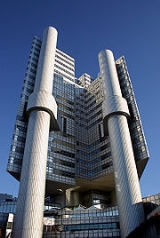 UniCredit Bank Aktiengesellschaft
Aktiengesellschaft
Aktiengesellschaft is a German term that refers to a corporation that is limited by shares, i.e. owned by shareholders, and may be traded on a stock market. The term is used in Germany, Austria and Switzerland...
(formerly Bayerische Hypo- und Vereinsbank AG, commonly referred to as HypoVereinsbank or HVB) is the sixth-largest private German
Germany
Germany , officially the Federal Republic of Germany , is a federal parliamentary republic in Europe. The country consists of 16 states while the capital and largest city is Berlin. Germany covers an area of 357,021 km2 and has a largely temperate seasonal climate...
financial institution
Financial institution
In financial economics, a financial institution is an institution that provides financial services for its clients or members. Probably the most important financial service provided by financial institutions is acting as financial intermediaries...
, with a strong presence in Bavaria
Bavaria
Bavaria, formally the Free State of Bavaria is a state of Germany, located in the southeast of Germany. With an area of , it is the largest state by area, forming almost 20% of the total land area of Germany...
. The company is based in Munich
Munich
Munich The city's motto is "" . Before 2006, it was "Weltstadt mit Herz" . Its native name, , is derived from the Old High German Munichen, meaning "by the monks' place". The city's name derives from the monks of the Benedictine order who founded the city; hence the monk depicted on the city's coat...
, and together with Deutsche Bank
Deutsche Bank
Deutsche Bank AG is a global financial service company with its headquarters in Frankfurt, Germany. It employs more than 100,000 people in over 70 countries, and has a large presence in Europe, the Americas, Asia Pacific and the emerging markets...
, Dresdner Bank
Dresdner Bank
Dresdner Bank AG was one of Germany's largest banking corporations and was based in Frankfurt. It was acquired by competitor Commerzbank in December 2009.- 19th century :...
, Commerzbank
Commerzbank
Commerzbank AG is the second-largest bank in Germany, after Deutsche Bank, headquartered in Frankfurt am Main.-Activities:Commerzbank is mainly active in commercial bank, retail banking and mortgaging. It suffered reversals in investment banking in early 2000s and scaled back its Securities unit...
and Deutsche Postbank
Deutsche Postbank
Deutsche Postbank AG is a German retail bank with headquarters in Bonn. Postbank was formed from the demerger of the postal savings division of Deutsche Bundespost in 1990. It became a wholly owned subsidiary of Deutsche Post in 1999, and was partially spun out on the Frankfurt Stock Exchange in 2004...
, it belongs to the Cash Group
Cash Group
Cash Group is a cooperation of the four largest German private banks and their subsidiaries, in which they mutually waive ATM usage fees for their customers. It is not an interbank network but uses the pre-existing girocard network...
. The spokesman for the executive board is Theodor Weimer.

On 24 November 2005, its takeover by UniCredit Group
UniCredit
UniCredit SpA is an Italy-based, pan-European banking organization, with aprox 40 million customers and operations in 22 countries.- Geography :...
was completed, after an offer of five new UniCredit shares for one Hypo- und Vereinsbank share was accepted by shareholders representing 93.93% of the company.

The HVB banking group employs approximately 18,000 employees and operates approximately 780 subbranches and has more than 8.5 million clients. The bank's business focuses on Germany
Germany
Germany , officially the Federal Republic of Germany , is a federal parliamentary republic in Europe. The country consists of 16 states while the capital and largest city is Berlin. Germany covers an area of 357,021 km2 and has a largely temperate seasonal climate...
.

HVB Group was formed in 1998 from the merger of Bayerische Vereins-bank A.G. and Bayerische Hypotheken- und Wechsel-Bank A.G., which were the two main Bavarian-based regional banks at that time.